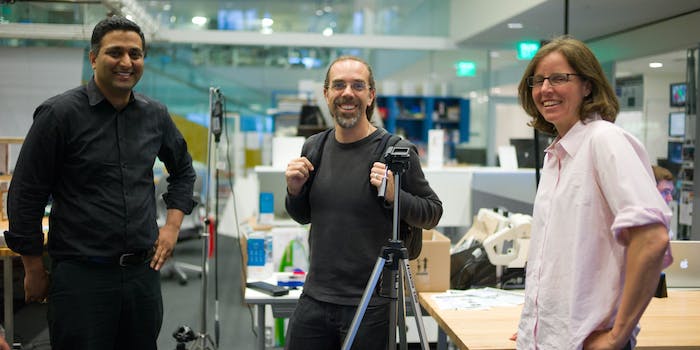 Google exec at SXSW: Hire people who don’t look like you

Not all of Google‘s execs at South by Southwest were too busy interrupting other former Google execs to weigh in on diversity. In his talk on the main stage toward the end of the festival’s technology portion, Astro Teller, Google X‘s “Captain of Moonshots,” steered the conversation toward workplace diversity.

In response to a question about how Google X recruited talent for projects like the self-driving car and Google Glass, Teller homed in on the importance of building a diverse team.

“This is not a complete answer, but I think it’s an important partial answer,” Teller began. “Diversity is…. this thing that people throw out, like a tip in a restaurant. They love saying ‘diversity’ but living up to it is a good bit harder; diversity, if you don’t know why you’re doing it, you probably won’t do it seriously.”

“…It turns out that having people from radically different backgrounds is the best way to have mental diversity.”

Smith, who is openly gay, gives regular talks at conferences like the Lesbians Who Tech Summit two weeks ago.

Teller emphasized that cultivating what he called “mental diversity” is the key to unlocking tech’s diversity woes. According to Teller, that notion maps directly onto hiring practices, which in turn fuels better, more innovative teams.

“… Getting some correct mix of ethnicities is not actually the point; it’s mental diversity. But it turns out that having people from radically different backgrounds is the best way to have mental diversity.

And mental diversity won’t solve all of your problems, but if you want to have a lot of interesting [projects], if you want to explore places that people haven’t explored, having a bunch of people who look just like you and think just like you is not an awesome way to really stretch your collective minds and explore those new places.”

It’s unclear whether Google X’s diversity numbers currently reflect those values, but at least one office at Google seems acutely aware of what needs to change—and how.