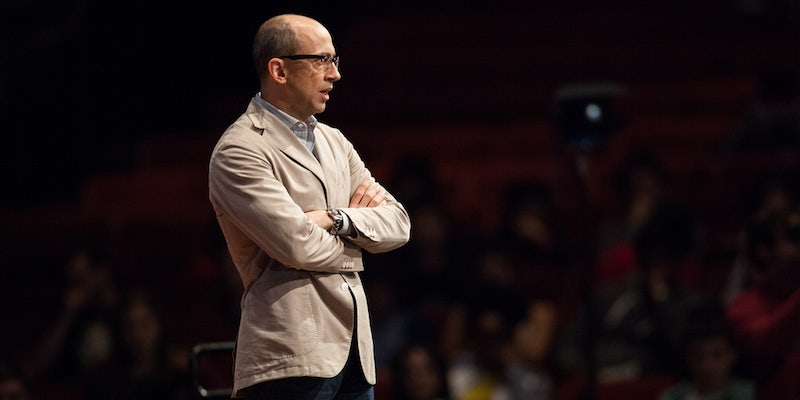 Twitter should have been expecting its hashtag AMA to devolve into exactly what it became: a backlash against its abuse policies.

Twitter seems to have learned nothing from the travails of Robin Thicke. Anyone who witnessed the #AskRobinThicke hashtag meltdown could have easily predicted that when Twitter CEO Dick Costolo decided to take questions from Twitter users before going on CNBC today, something like this would happen instead:

The Twitter version of a Reddit AMA (Ask Me Anything) probably seemed, in theory, like a step towards transparency and community outreach when CNBC announced the hashtag earlier.

CNBC’s own Storify writeup of the hashtag portrayed the tweets as predictably banal, mostly serious with some outliers thrown in. And at least initially, that seems to have been a fair assessment.

But CNBC also reported that nearly 33 percent of the Tweets addressed concerns related to safety, harassment, hate speech, and other forms of Twitter abuse. Since that assessment was made, the percentage has almost certainly doubled, if not tripled. The current reality of the #askCostolo hashtag is a melee of Twitter users demanding to know what Twitter intends to do about its widely-criticized harassment policies, and what many Twitter users see as a sustained habit of putting the onus on the victim to “just ignore” racism, sexism, homophobia, and other forms of hate speech, as well as personal threats.

The subject of Twitter harassment seems to have taken over the tag around 3pm Eastern Time, about an hour before the scheduled CNBC talk. A number of Twitter feminists including Shanley Kane, Imani Gandy, and Ashe Dryden urged their corner of Twitter to join them in an organized protest over Twitter’s handling of harassment, something that has been a major concern to the Tumblr feminist community in the past.

But they weren’t alone. A glance at the hashtag reveals just how complicated, complex, frustrating, and fundamentally unsatisfying, Twitter’s abuse policies have proven for a large number of users.

If you tweet ceaselessly @support without response, does it make a sound? #askcostolo

Why aren’t death and rape threats a violation of Twitter’s abuse policies? #askcostolo

Why is your Twitter policy to shift blame for harassment to the victim (“don’t respond!”) rather than to ban the harasser? #askcostolo

Why have we been suspended twice for RTing/exposing gendered hate speech on your site, rather than the abusive users we RT? #askcostolo

Why can people tweet threats and abuse, but as long as they “delete” it before Twitter gets around to it a month later, it’s ok? #askcostolo

#askcostolo Why does the block feature block me from seeing what stalkers/trolls are doing, but not them from seeing my profile?

#askcostolo Other social media sites block a harasser’s IP address when reported, why can’t Twitter do the same?

Twitter users also took the company to task for its recently revealed dismal staff diversity count. Many of them correlated Twitter’s low number of women and minority staffers with its ambivalent response towards harassment of women and minorities on its website.

Does twitter’s useless system of reporting threats & harassment have anything to with its lack of diversity at twitter hq? #askcostolo

#askcostolo Seriously, what’s up with your terrible diversity demographics? Why also are you not doing ANYTHING @ ABUSE towards WOC????

Will you hire more women, people of color and trans folks to decrease abuse on twitter @dickc #askcostolo and when will this happen?

There were other practical concerns and questions as well.

If @verified isn’t more generally available to everyone (even with proof of identity), why isn’t it named differently, like VIP? #AskCostolo

And plenty of humor referencing the hijacking of the hashtag.

But most of the commentary centered around the need for a stricter, more consistently applied system of identifying and dealing with harassment and other incendiary tweets. One user referenced the recent rape of a 16-year-old girl that spawned a horrifying viral photo meme and hashtag on Twitter, #jadapose.

@dickc Why in the hell were images of a teen girl being raped even posted, much less ALLOWED TO TREND FOR DAYS? #AskCostolo

In response to the deluge of tweets, CNBC anchor Kelly Evans asked Costolo on the segment what Twitter was doing to improve “user security,” to which Costolo gave a somewhat unsatisfying response:

We have a whole product team focused on user safety and privacy, and we’ll continue to invest in that as we become increasingly the world’s information network, obviously it’s the case that we need to take that seriously and address it.

The response doesn’t indicate what action the company is taking to address recurring complaints about harassment and abuse on the site. Though it’s a complicated question, it’s one that many other major platforms have wrangled with more or less successfully. Tumblr allows the banning of users by IP address, and Facebook revamped its abuse guidelines after a dialogue with community members.

Twitter, meanwhile, is not very far along from where it was a year ago, when feminist Caroline Criado-Perez was inundated with rape threats on the website. The company responded by rolling out a “report abuse” function, initially only for mobile; but that solution has proven unsatisfying for many users, since reporting abuse of a third party takes you to a note informing you that only parties directly involved in a dispute can report the abuse in question.

Of course, Twitter may have implemented that feature because shortly after rolling out the “report abuse” function, transphobic abusers used the “abuse” function themselves to mass-report false claims of harassment. It seems as though Twitter just can’t win no matter how vigilantly it tries to ward off inappropriate user behavior.

Still, the tweets on the hashtag keep coming.

Someone can threaten literally anything–even torture or murder–and then delete it, and you won’t accept screencaps as evidence #AskCostolo

Whether the answers issue from Dick Costolo or not, it’s clear that a stronger and more direct response from Twitter is needed about how it is dealing with abuse and harassment of its userbase.