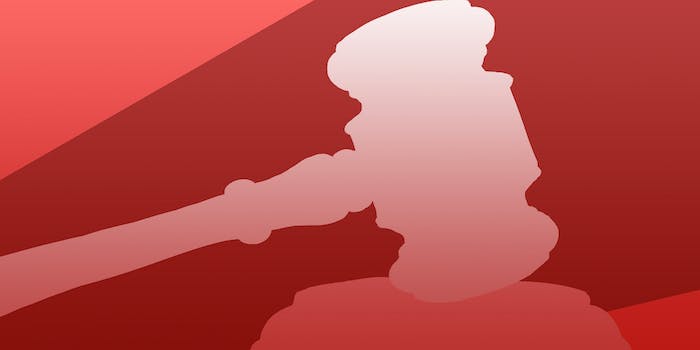 The laws vary widely in the U.S.—and even more widely overseas.

When cheating website Ashley Madison was recently hacked, some adulterers might have wondered if the data breach would lead to a breakup or divorce. Now that the hackers have likely released all the site’s data on more than 30 million users, could their cheating also land them in legal trouble?

Half of Ashley Madison’s 36 million users are Americans, and nearly two dozen U.S. states (plus the military) have laws against adultery, as shown in a Daily Dot infographic seen below. These states prescribe punishments as minor as a $10 fine (Maryland) and as serious as a three-year jail sentence (Massachusetts). 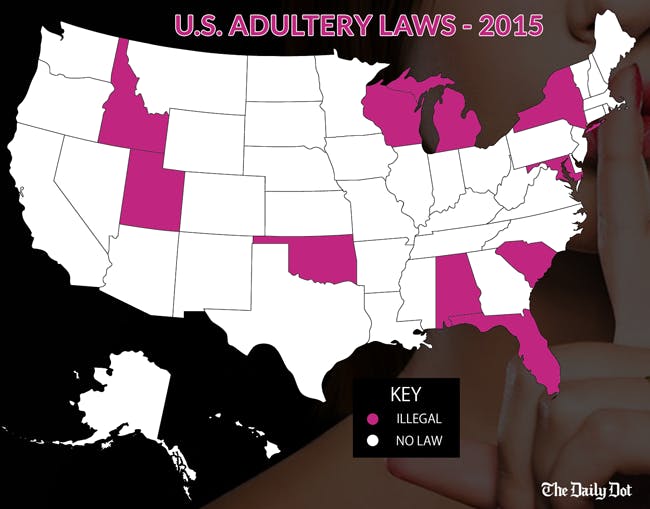 U.S. adultery laws date back centuries, but they have been applied surprisingly recently. It was only in 2003 that the Supreme Court ruled in Lawrence v. Texas that laws banning sexual activity between two consenting adults were unconstitutional. The ruling targeted anti-gay sodomy laws that remain on the books in several states.

Those laws continue to affect the legal system even after the Court’s ruling in Lawrence.

“It is an open question whether adultery continues to be viable as criminal law even though it remains on the books in 24 states and territories,” Melissa Murray, a professor of law at the University of California, Berkeley, told the New York Times in 2012. “Nobody is going to be going to jail for it. But it is used in divorce and custody cases and even in some employment cases.”

Why do these laws remain on the books? Politicians are hesitant to openly oppose adultery laws, Hofstra University professor Joanna L. Grossman told the Times. The use of the law to enforce a subjective moral code appeals to many politicians—not to mention thousands of their constituents.

In recent decades, various states have repealed their adultery laws, including Colorado in 2013 and New Hampshire in 2014. It hasn’t always been an easy fight. Prior to Colorado’s 2014 vote to repeal its adultery law, for instance, state Sen. Kevin Lundberg (R) argued passionately in defense of government enforcement of private moral standards.

In the U.S. military, cheating is a crime punishable by court-martial.

Ashley Madison, whose corporate slogan is “Life is short. Have an affair,” also has nearly 18 million international users, and international adultery laws vary even more widely than do U.S. statutes.

In South Korea, where over 35,000 people have been jailed for adultery since 1985, Ashley Madison has become hugely popular and profitable since its 2014 launch—a debut that was plagued by a government ban that only ended when a court struck down the country’s 60-year-old adultery law.

The Philippines has sought to block Ashley Madison because it facilitates the crime of adultery, according to the government. But thousands of Filipinos have used the site in the last year. Launches in Singapore and Thailand have been blocked by politicians in those countries.

Taiwanese law punishes adultery with up to a year in prison, but Ashley Madison has already found major success in the country. Leading politicians have expressed opposition to the adultery law, which explains the lack of active resistance to Ashley Madison’s arrival there.

Other countries are eagerly embracing the site. Japan and Hong Kong have proven to be big markets for cheaters.

Outside of the Western world and East Asia, adultery laws can be much harsher. In countries governed by Islamic law, punishments can include jail time and even death, mostly for the women involved. Ashley Madison does not operate in any Muslim nation or African country other than South Africa. Many of these countries do have their own online dating sites, but they are almost always smaller, and many must hide their operations from the government.

Update 8:15am CT, Aug. 19: The Ashley Madison hackers have released nearly 10GB of data that security experts believe is legitimate. This article has been updated to reflect the data dump.