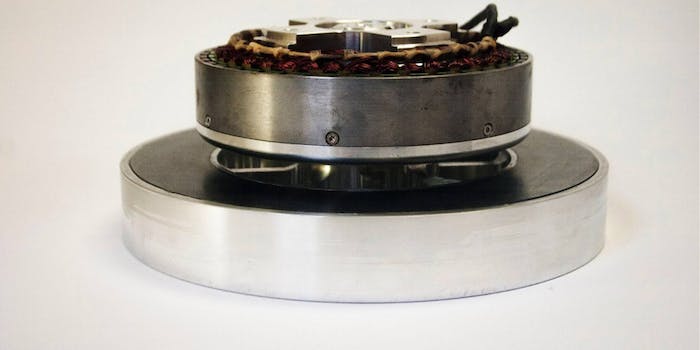 One future technology bringing us closer to the next.

We are all familiar with Elon Musk’s revolutionary electric car company Tesla, as well as his dream of colonizing Mars using SpaceX‘s incredible reusable rockets. But it’s Musk’s lesser-known vision, the Hyperloop, that is getting a boost toward reality with a now-purchasable $10,000 set of hover engines. And no, not like these. The Hendo Hoverboard (a board that actually hovers) is the creation of Silicon Valley-based company Arx Pax. It’s essentially a skateboard with engines that induce opposing magnetic fields to the surface below, providing lift. It’s elementary school science taken to a whole new level.

Now the company is selling its latest hover engine, the HE 3.0, for $10,000 (per pair) to anyone who has the money and needs something to float. A group who may need the assistance of these engines are those attempting to create Musk’s Hyperloop vision, a tube-based transportation system designed to transport floating objects at record speeds.

The company is hoping to get the two main Hyperloop players—Hyperloop One and Hyperloop Transportation Technologies—to use the HE 3.0 to float their high-speed trains, according to The Verge.

Arx Pax claims the engines can make anything from a heavy box to, eventually, an entire building float above the ground.

“This is the most efficient way to separate an object from the earth,” Arx Pax’s CEO Greg Henderson told The Verge. “When you have something that actually hovers, it sells itself.”

Even if the engines aren’t a big success in fulfilling the Hyperloop dream, Henderson might be on to something. This floating bonzai tree is a pretty good indication that we like stuff that hovers, and will pay even if it is just for the added awesomeness.