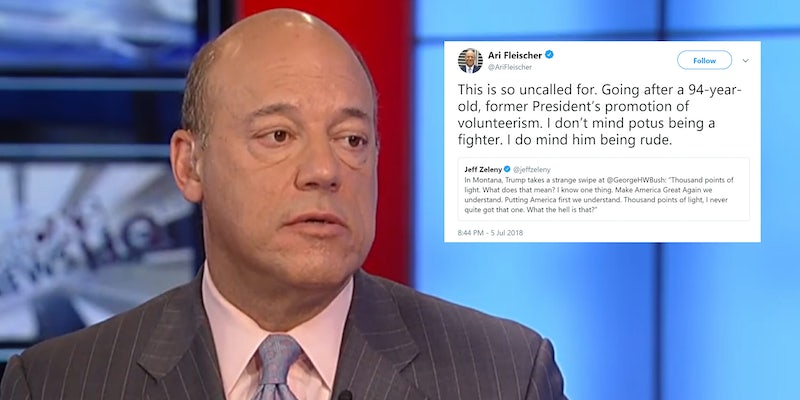 But he also took a moment to—oddly—go after former President George H.W. Bush’s call for volunteerism in 1989.

That was too much for Ari Fleischer, press secretary under George W. Bush, who was flabbergasted that Trump would attack a senior citizen.

This is so uncalled for. Going after a 94-year-old, former President’s promotion of volunteerism. I don’t mind potus being a fighter. I do mind him being rude. https://t.co/Hr0d20Wuzz

Fleischer—who has not taken a hardline stance against the current president on a number of issues—was ripped online for this being his breaking point with Trump.

Ari Fleischer has found his breaking point: Trump making fun of a Bush I speech from 1988https://t.co/cT8KmQAdEq

It wasn't the insults towards a senator with a brain tumor, a handicapped reporter, black women, Mexicans, all Democrats, the G7, glad to see that Ari Fleischer actually has a limit. https://t.co/UCm73VElxo

Oh, so this was the bridge too far. https://t.co/gU60CQzcXG

"I don't mind him being a shit firehose. I do mind him spraying me." https://t.co/aZgaIg98xH

Seriously though. Of all the things to declare “uncalled for,” this was a curious decision.