Infringin' good in the neighborhood.

An Oregon photographer says that her local Applebee’s restaurant printed photos from her Flickr account to decorate its walls, even after she denied them permission.

Lainey Dyer, an independent professional photographer, says an Applebee’s executive contacted her in early 2014, while the Corvallis, Oregon, franchise was undergoing renovation. The corporation had seen her photographs of people around town, the executive said, and would like to display them in the remodelled restaurant, but refused to offer any money for them.

“I was like no way, they can definitely afford to pay,” Dyer told the Daily Dot.

Nevertheless, she says, when she visited the restaurant Wednesday, she counted four of her photos on display.

“The manager said it’s all from corporate and didn’t know who to contact,” Dyer said. As she noticed one final photo in the entrance, “I turned around and saw the manager making an exasperated face to the hostess.”

Before leaving, Dyer snapped one photo of her work hanging the wall. The corresponding Flickr page where she first posted her photography clearly marks the image as a copyrighted work: 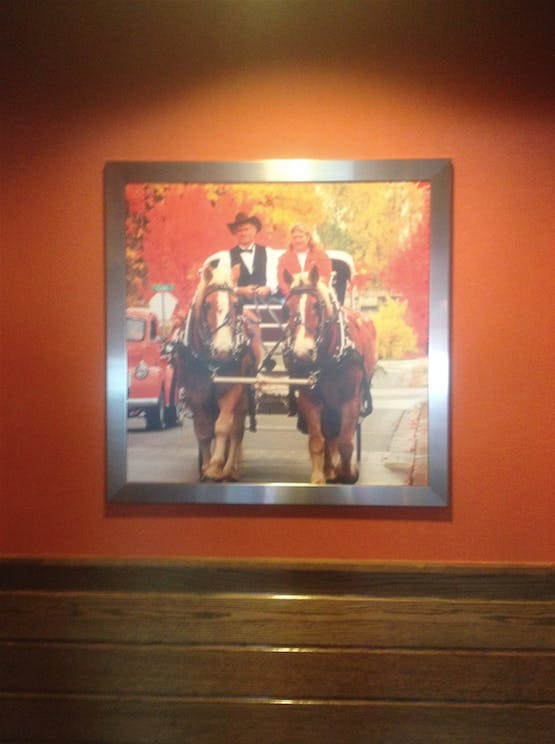 “Generally, there’s a copyright in photography, and generally, the person who takes the photograph is the copyright owner,” Mark Jaffe, a lawyer at Tor Ekeland who specializes in intellectual property, told the Daily Dot. Displaying such an image “in a commercial establishment,” he said, would likely violate that copyright.

When reached for comment, a manager at the Corvallis Applebee’s said “I don’t know anything,” and directed questions to their corporate office. A corporate spokesperson said he was looking into the matter.

One company handbook proclaims that “Each restaurant’s décor reflects local hometown heroes ranging from local athletes and celebrities to firefighters and other notables.”

The first part of Dyer’s story, at least—in which Applebee’s approached her about using her Flickr images without compensation—appears common. The Internet is riddled with photographers sharing similar tales.

“It’s hard as a photographer getting paid anyway,” Dyer said. “It’s ridiculous that, with that big a corporation, I’d even have to ask.”

Photo by Digital_Third_Eye/Flickr (CC BY ND 2.0)