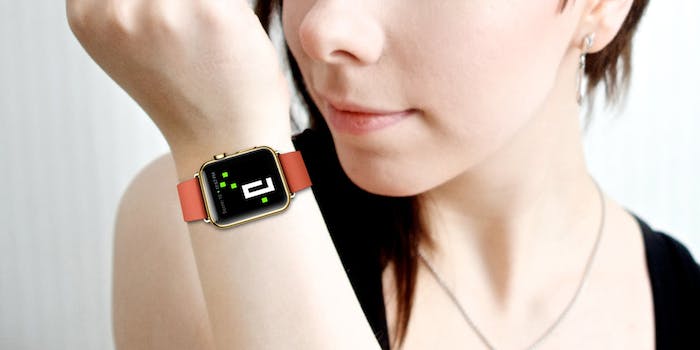 We’ve come to expect a lot from mobile games, but not that long ago we were content to drive a little line across our screens, helping him eat pixelated apples. Yes, Snake: The game that makes you look back fondly on your Nokia 3310.

While most developers are trying to figure out how to innovate new ways to use the device’s capabilities, others are taking a more nostalgic route. Alaric Cole, founder and CTO of Imagist Labs, for example, is bringing the beloved original mobile game Snake to your wrist (provided that wrist is wearing an Apple Watch).

While many developers are struggling with the Apple Watch’s small screen, in this case, it was an asset. Cole said that because Snake was originally created for small devices (remember how small that Nokia was?) it was a natural transition to make it for the Apple Watch.

“I think we’re starting to realize that ‘old’ is an odd moniker for games,” Cole said in an email. “Good game mechanics are essentially timeless. The game of Go, for example—people have been playing it for thousands of years. Snake is the classic mobile game.”

Controlling the snake is pretty straightforward. You simply tap on the face of the Apple Watch and navigate the white snake around the green apples. Like its feature phone predecessor, it can be quite difficult to elongate your tail thanks to the small surface area. But game developers shouldn’t be making games that last too long anyway, according to Cole.

“The Watch has an exceptionally small screen, and its battery equally diminutive, so you have to be careful,” Cole said. “It can also get uncomfortable to hold the Watch up, so apps and games should be designed with that in mind. Really, less than 10 seconds is the expected interaction time.”

Apple Watch is in a category all its own, with different programming challenges unique to smartwatches: Developers have to grapple with screen size, battery drain, and work within the constraints of the Apple WatchKit application programming interfaces (APIs). And on smartphones and tablets, games can use sound, but that’s impossible with the Apple Watch.

Because it’s such an iconic game, it was easy to make instructions straightforward enough to understand through small, square screengrabs and short descriptions of the rules. To build the app, Cole had to program a series of hundreds of pixels on a low-resolution display to create the snake’s board and test the functionality with limited gesture controls, and kept the interface dark in order to save battery.

“It’s not possible to build just anything right now, so you have plan carefully; I had to actually build a grid of hundreds of buttons, by hand, to get the mechanics to work,” he said. “Once I had the board down, the actual gameplay was easy.”

Cole programmed the app using Swift, Apple’s iOS and OS X programming language released in 2014. And since he didn’t have full access to the Apple Watch before release, Cole tested Snake on an iPhone until he could get his hands on one.

Happily, testing proved Snake on Apple Watch is just as fun as it was on our flip phones way back when.