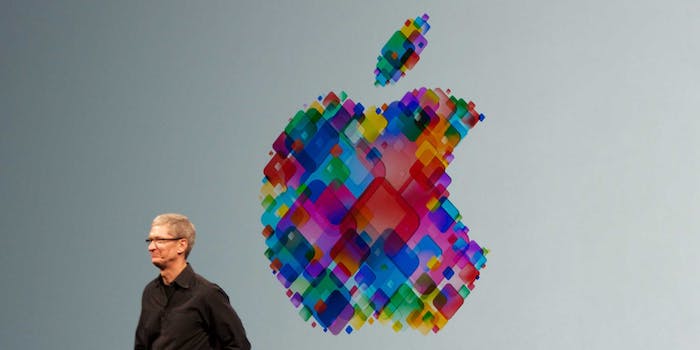 There’s no such thing as an “iWatch.” Sure, everyone’s been referring to Apple’s long-rumored wearable as the iWatch for years, but the actual product is officially named Apple Watch. Despite that, it looks like the parlance of the Internet has seeped into Apple CEO Tim Cook’s subconscious, as he made a rather surprising slip in an interview with ABC News.

In speaking about the production of Apple’s products shortly after wrapping up his company’s special event yesterday, Tim Cook listed the devices that developers will be working on going forward. “Developers who are writing applications for iPhone and iPad, and the Mac, and now of course, as of today, the iWatch.”


Wait, what? Shockingly, neither Cook nor interviewer David Muir seem to notice the slip, which just makes it all the more funny.

The mistake suggests that either Tim Cook has been spending a whole lot of time reading rumors about his company’s own device, or that Apple might have actually used the term “iWatch” during development of the device. Given Apple’s habit of slapping a lowercase “i” in front of common words, that’s definitely a possibility.

In all honesty, we should probably cut Cook some slack. After all, he’d just finished spending two hours destroying his competitor’s smartwatch dreams, introducing a pair of new iPhones, and revolutionizing mobile payments. The guy’s had a lot going on.