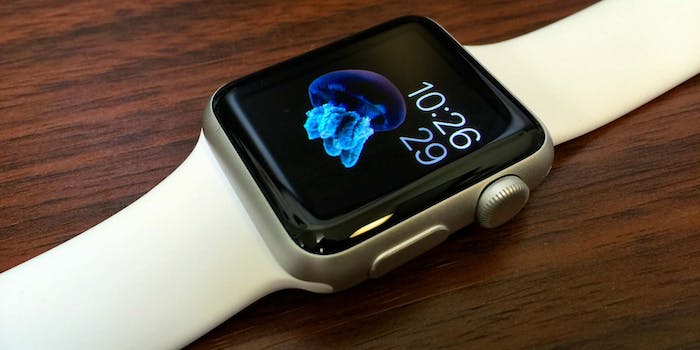 Why the Apple Watch isn’t just another smartwatch

It didn't take long for the Apple Watch to become part of my life.

In my office, above my monitor, on a pinboard, I have a wearable graveyard. Hanging helplessly by individual thumbtacks are the various fitness trackers and smartwatches that I’ve bought, used, and decided I could live without.

It took me a long, long time to understand the point of a smartwatch. While some of them offered glimpses of how strapping a tiny computer on my wrist could change my daily routine for the better, none did so regularly enough to become an essential part of my life. 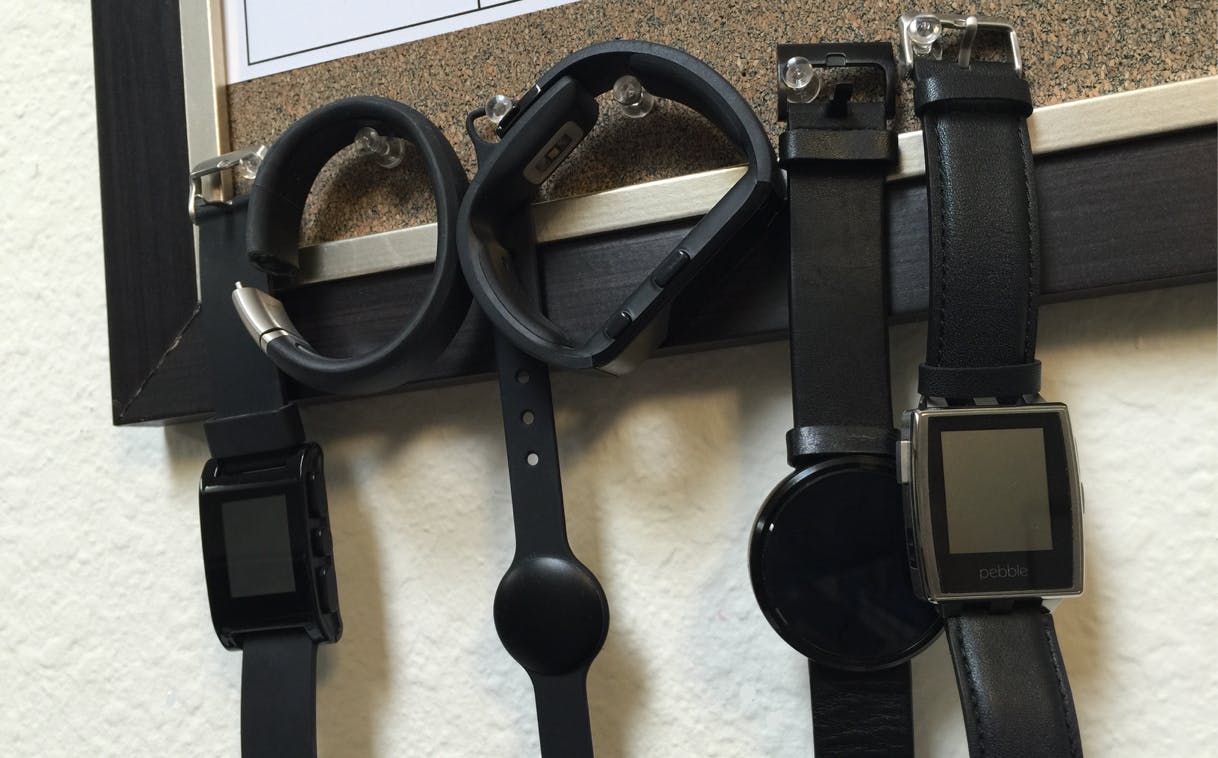 In less than a week of wearing it, the Apple Watch has become that essential accessory, doing what the others failed to. But the reason it has been able to conquer me in a way its competitors haven’t has less to do with Apple than I would have guessed.

When UPS dropped off my Apple Watch on April 24 I unboxed the device expecting to fall in love with it in the same way I fell in love with my first iPhone. I expected to marvel at the craftsmanship, to be astounded by the build quality and feel as though my considerable investment was well spent.

The Watch is indeed a tiny but impressive piece of tech. Everything about it, from perfectly smooth roll of the crown to the expertly contoured band, embodies “premium.” Even the box that it comes in is thick and heavy, making it feel important and expensive before you even open it.

This is all part of Apple’s mastery of presentation, and it works flawlessly no matter how many times you’ve torn open a new Apple product.

It was exactly what I expected.

But presentation can only carry you so far, and what happens when you hit the power button is what ultimately matters most. With the Apple Watch, despite watching hours of Apple’s videos on its various built-in functions, I had no idea what I was going to use it for. In short, turning it on was exactly like the first time I powered up every other smartwatch I’ve owned.

With the Pebble, Android Wear, and Microsoft Band, we’ve come to expect smartwatches to be nothing more than a tiny second screen for our smartphones—almost as though we’ve chipped off a chunk of our larger displays and strapped it to our wrists. Most are just a notification window with a few extra features and sensors to make them appear to be something they’re truly not.

When a device like the Microsoft Band or Moto 360 claims to have “apps” it’s a bit like saying that a LeapFrog tablet has apps. Yes, technically I suppose they are individual software applications, and therefore the marketing departments can take full advantage of whatever buzzwords they choose, but by that definition the TI-86 calculator I used in college also had apps.

When you sync an Apple Watch with an iPhone for the first time it takes a considerable amount of time to perform its setup tasks. At first I was a bit confused by this, but once it completed its work and let me poke around for the first time I realized why it taken so long: It was syncing all my watch-compatible iPhone apps so I could use them right out of the gate. 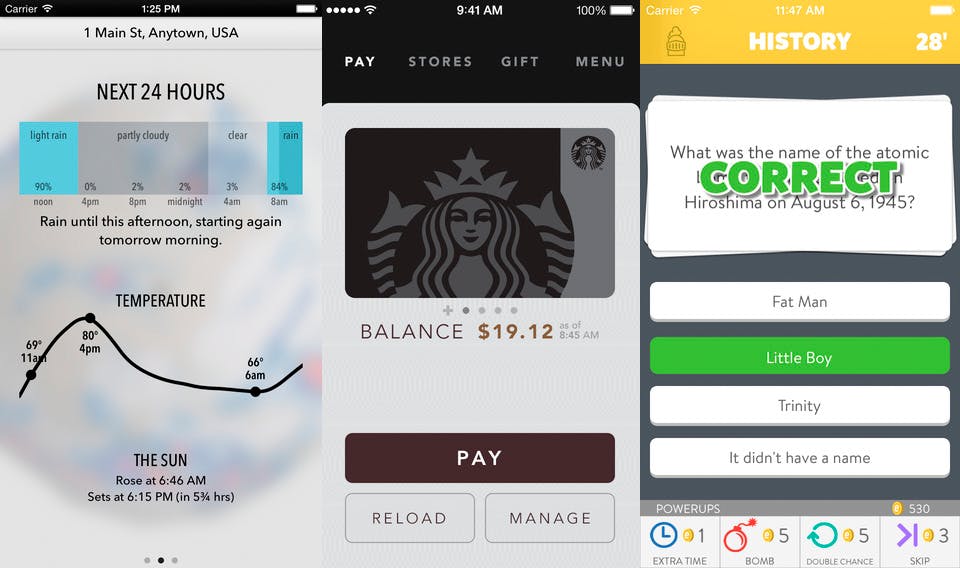 This is the precise moment when the Apple Watch separated itself from every other smartwatch I’ve owned. Instead of presenting a platform and tools for me to use and, hopefully, become so attached to that I would want to wear it every day, the Apple Watch made its case immediately.

My habit of frequently checking the hourly precipitation forecasts in order to plan my bike rides was normally handled by the Dark Sky app on my iPhone. Now, the entire experience has been transferred to the Watch.

Paying for my coffee in the morning via the Starbucks app is now two taps on my timepiece. Even something as potentially time consuming as a few rounds of Trivia Crack can now be enjoyed without ever taking my iPhone out of my pocket.

For the first time, a new smartwatch didn’t wait for me to give it a reason to be useful; It forced me to think of a way that I could live without it. I’m still working on figuring out that last bit.

The most interesting part about all of this is that the parts of the Apple Watch experience that have truly hooked me are the things that weren’t expertly crafted by Apple, but instead were developed by the app makers I’m already invested in.

When Apple announced the watch in late 2014 without a clear release plan, it seemed like missed opportunity to strike while the iron was hot—that is, unless you have experience in software development. By revealing the watch and giving developers the platform on which to work with a long road to release, Apple ensured that a huge chunk of the apps that keep us glued to our iPhones will also be keeping us glued to our Watches.

Apple’s success with iOS apps and the fact that the App Store remains the most desirable place to launch a new piece of mobile software is rapidly translating into the number one reason to invest in an Apple Watch.

I can safely say that without the wealth of actual smartwatch apps that are already filling my home screen, the Apple Watch would be at great risk of being retired to yet another thumbtack.

The fact that the third party app experience is what really hooked me isn’t to say that Apple phoned it in regarding its own software—in fact, it’s quite the opposite.

Everything from the home screen to the Glances feature—which beautifully fills the gap between push notifications and taking the time to launch a separate app—is remarkably well thought out. The combination of the Digital Crown and the new Force Touch expertly solves the problem of input on such a small device, and there’s never a moment where you feel as though you don’t have control over what the device is doing.

The watch faces are gorgeous and fully take advantage of the impressively crisp Retina display. Some of them—specifically the Motion face with the butterflies or jellyfish animations—are so lifelike it’s fun to just stare at them for a moment.

The marriage of hardware and software is near perfect, and as cliché as it always sounds, there’s a definite bit of Apple “magic” here.

Buying into the future

Ultimately the most exciting thing about the Apple Watch is what the future holds. We’re in the very, very early days of an entirely new class of devices, and unlike the slow ramp-up of app developers that eventually made the iPhone a must-have device, there are already countless brilliant minds working on making an already great gadget even better.

Apple’s take on a wearable is as unique and original as the droves of developers who will make it yet another iconic device.