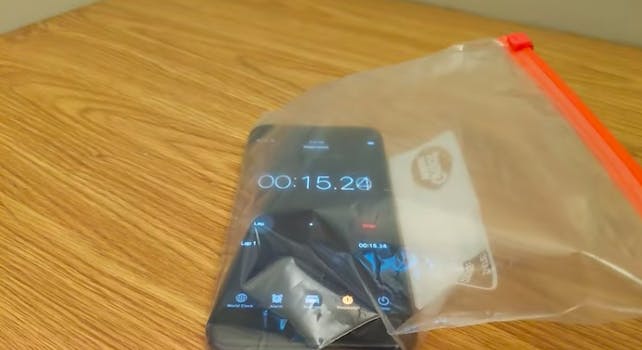 Turns out helium can wreck your iPhone

How an inert gas wreaks havoc on Apple phones & watches

Apple products began to malfunction at a hospital near Chicago earlier this month, shortly after an MRI machine was installed, an IT worker described on Reddit.

According to Erik Wooldridge, a Systems Specialist at Morris Hospital, reports began flooding in that “iPads, iPhones, and Apple Watches were all completely disabled” after medical staff started testing the new equipment.

While Wooldridge initially suspected the MRI scanner, which uses strong magnetic fields and radio waves to generate images of humans’ internal organs, the issue did not appear to affect Android devices or other medical devices, ruling out the possibility of an inadvertent electromagnetic pulse.

“It doesn’t surprise me that a massive, powerful, super-conducting electromagnet is capable of doing this. What surprises me is that it is only effecting [sic] Apple products,” he wrote. “Right now we have about 40 users impacted by this, all of which will be getting shiny new devices tonight.”

After contacting the MRI’s manufacturer, Wooldridge says he was informed that helium, used to cool the device’s super-conducting magnets, was to blame.

Wooldridge followed up by reaching out to fellow system admins on Reddit to see whether the explanation sounded feasible.

“We’re being told that the issue was caused by the helium and how it interacts with the microelectronics. u/captaincool and u/luckyluke193 brought up some great points about helium’s interaction with MEMS [Micro-Electro-Mechanical Systems] devices, but it seems unlikely that there would have been enough helium in the atmosphere to create any significant effects on these devices,” he added.

Skeptical, Wooldridge continued to investigate before finally discovering what was causing the widespread problem.

“I discovered that the helium leakage occurred while the new magnet was being ramped,” he wrote. “Approximately 120 liters of liquid He (helium) were vented over the course of 5 hours. There was a vent in place that was functioning, but there must have been a leak.”

Instead of being vented outside, Wooldridge believes the gas began to spread internally, affecting Apple products throughout the hospital.

“We do not know how much of the 120 liters ended up going outdoors and how much ended up inside,” he stated. “Helium expands about 750 times when it expands from a liquid to a gas, so that’s a lot of helium (90,000 m3 of gaseous He).”

But why Apple products only?

Wooldridge conducted several tests in an attempt to get to the bottom of the dilemma. After pumping helium into a plastic bag containing an iPhone 8+, Wooldridge discovered that the device’s clock began to fail in just a matter of minutes.

According to a blog post from iFixit, a right-to-repair organization, Apple, unlike Android, relies on silicon as opposed to just quartz for their clocks.

The belief is that “helium molecules are small enough to get inside the device, physically stop the clock, and turn your phone temporarily into a paperweight.”

After a thorough investigation, iFixit discovered that Apple also appears to be aware of the issue.

Both the iPhone and Apple Watch user guide state: “Exposing iPhone to environments having high concentrations of industrial chemicals, including near evaporating liquefied gasses such as helium, may damage or impair iPhone functionality.”