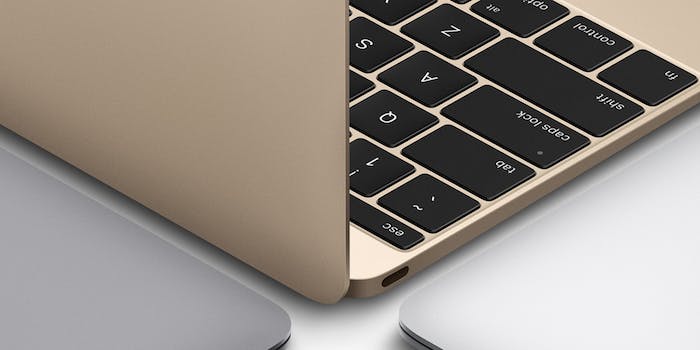 A little too ahead of the curve or future-proof?

Yesterday, Apple has declared war on ports. The new MacBook Air, for all its gold and “force click,” is conspicuously devoid of places to plug in.

This isn’t the first time Apple has stripped its laptops. And last time, consumers nearly rioted over the decision, confounded on what they would do and how it would work. And then, it was fine.

We’re still in the “freak out” phase of the MacBook redesign. The new standard model of the laptop is now nearly smooth all the way around the edges; there’s only one port on the whole machine: a USB Type-C port.

It’s a “one ring to rule them all” mentality. It’s an extraordinarily versatile port that can handle charging, data transfer, video-out—who knows what else? Grab home appliances and start plugging them in just to see what happens! (Don’t do that.)

As Apple sees it, everything will eventually go wireless, so ports don’t matter all that much. Peripherals represent the past. Just don’t tell that to the rest of the world, still plugging in external storage or connecting their laptop to a larger screen. It’s not that you won’t be able to do those things with the new MacBook, it’s that you’ll only be able to do one of them at a time. That do-everything USB Type-C port can handle everything you plug into it, except for a second cord.

Since USB Type-C isn’t an Apple-specific like the Lightning port, it’ll be open for a wide variety of uses. It’s inclusion is a welcome one. The thing is, it’s too preemptive a strike. It’s ahead of the curve, but just a little too ahead.

A glance at the most recent MacBook Pro model shows connections for two Thunderbolt 2 ports, two USB 3.0 ports, SDXC card, and HDMI—all accessible at any time. And that’s more important than the fact that all these ports have become one. You can’t charge your MacBook with your iPhone plugged in. You can’t run your display to an external monitor while attaching a flash drive. At least not easily.

The only way to solve the problem of the disappearing ports is entirely antithetical to the whole “we only need one plug because we’re going wireless” idea: an additional adapter.

It’s a “one ring to rule them all” mentality.

Apple sells a couple different dongles that plug in to the USB Type-C port and provides some of the functionality once built right into the computer. Priced at $80, these adapters add an HDMI and USB 3.1 port while keeping open another USB Type-C port to make up for the one it occupies.

That’s just the start though. Let’s say you want to get the MacBook up to speed with all the plugs of the MacBook Pro.

Start with the $80 dongle. That gives us HDMI, USB 3.1, and USB Type-C—still missing two Thunderbolt 2 ports, an additional USB, and an SDXC card reader. You’ll need to make the most out of USB to get the rest of this back, so USB hub is a good place to start. You can get one that turns a single USB into three ports for $15. Now grab an SDXC card reader that plugs into USB 3.0. You can snag one for under $10.

You’re at about $105 invested in getting your ports back at this point, but Thunderbolt is still missing. It’s going to stay that way. Thunderbolt is essentially dead here. It doesn’t convert to USB of the 3.1 or Type-C variety, so for all intents and purposes, it’s out.

It’s not a huge loss if you’re starting fresh but if you’ve already purchased Thunderbolt devices like the gigabit ethernet adapter or any other Thunderbolt cable (both $30 a pop), so you’ll have to eat those costs. Put those cords in the same drawer where you keep all your 30-pin connectors that the Lightning cord killed off.

The good news is that some of that capability will come back with USB Type-C as more third parties get involved in making adapters for the unifying port. The bad news is that none of it will be present if you open the box to your new Macbook this April.

And hey, if you need more USB Type-C ports to plug in those new accessories, you can just continue chaining together adapters.