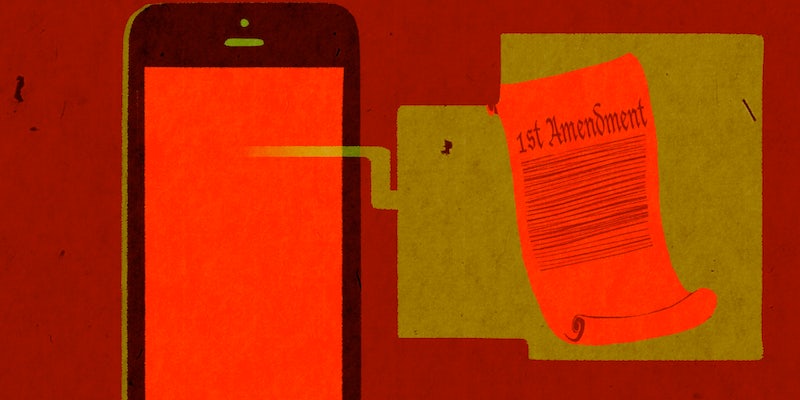 One of the lawyers who helped establish this principle says that Apple's argument is spot-on.

Apple‘s argument that a court order forcing it to write software code violates its First Amendment rights is legally sound and raises serious concerns, according to one of the lawyers most responsible for establishing the precedent that computer code is a form of speech.

Apple repeatedly pointed to this precedent in its motion last Friday to vacate a ruling ordering it to help the FBI unlock the iPhone of one of the San Bernardino shooters.

“What the FBI is demanding that Apple do is basically publicly capitulate to the government’s views.”

The company argued that, if it were forced to write code to assist in that effort, it would set a precedent that could lead to more intrusive government demands. It suggested, for example, that the government could use the same legal argument to compel it to add surveillance code to a future iOS software update, thus enabling authorities to monitor a suspect using an updated phone.

Cohn, now the executive director of the Electronic Frontier Foundation, endorsed Apple’s repeated citations of her cases. But she said that the controversial iPhone-unlocking order impinged even further on Apple’s free-speech rights than the restrictions in her cases.

In the Apple case, the government is not restricting anyone’s ability to share code. Instead, it is requiring Apple to write new code—in this case, custom software that would disable security features on the phone so the FBI can flood it with password guesses. Even more importantly, Cohn said, it is asking Apple to digitally sign that code—effectively vouching for its legitimacy as a product of the Cupertino-based company—so that the device will accept it.

While the signature is based on a technical fact—a security feature to prevent the phone from accepting fraudulent operating systems—it has political and constitutional dimensions, Cohn said.

“They’re not just asking Apple to do some writing, which itself is a First Amendment problem,” she said. “They’re making Apple sign on the dotted line that this is authentic and represents Apple’s seal of approval. That, to me, is particularly interesting and makes the First Amendment problem that this creates for Apple pretty easy to see, even if you’re not a coder.”

Apple argued that, by forcing it to write and sign the requested code, the government is compelling it to speak through that code. Compelled speech violates the First Amendment unless the speech is reasonably tailored and the government has a compelling interest.

In two of Cohn’s cases, individuals challenged government restrictions on the sharing of encryption code, arguing that those restrictions constituted a prior restraint on the production and distribution of code—which, they said, was a form of speech. Courts agreed with both of those plaintiffs, establishing the principle. (The government later modified its restrictions, causing an appeals court to send one case back to the district court, but that lower court’s ruling remains valid.)

In Cohn’s third case, involving DVD ripping, a federal court upheld a ruling against the plaintiffs—who were sharing software that makes it easy to strip anti-piracy encryption from DVDs—but still agreed with their argument that the software constituted speech.

The EFF is preparing an amicus brief backing Apple’s arguments, including the First Amendment claim. Cohn revealed that an army of technologists instrumental in developing early cryptographic standards would sign the brief, including Martin Hellman, co-creator of the Diffie–Hellman key exchange, one of the earliest encryption protocols.

In fact, Cohn said, there was a strong case to be made that digital signatures were even “more powerful” than written ones, “because a digital signature actually confirms the authenticity of the thing that’s being signed in a way that a physical signature really can’t.”

“I think there would be a constitutional problem even if the government was just asking Apple to write code that Apple didn’t want to write,” Cohn said. “But the fact that it’s actually asking Apple to then put its trust marker on that, to me, makes it, again, even more clear that there are First Amendment implications for what’s going on here.”

Apple also argued in its motion to vacate the order that, by compelling it to “speak” contrary to its stated values of protecting strong encryption at all costs, the government was discriminating against it on the basis of its viewpoint—another kind of compelled-speech violation. Cohn agreed that the government was forcing Apple to produce speech that took its side.

“Apple has put its marker down to say, ‘Look, we think that the best thing for the world is for us to have uncompromised security, not compromised security,’” she said. “What the FBI is demanding that Apple do is basically publicly capitulate to the government’s views.”

While Cohn is best known for her work on code-as-speech cases, she and the EFF will also be backing Apple’s other major arguments.

Apple argued in its filing that the Communications Assistance for Law Enforcement Act (CALEA)—a 1994 law requiring telephone (and, later, Internet) providers to design their equipment so it could be wiretapped—bolstered its argument.

CALEA’s exemptions declare that the government can’t force a company to design its equipment in a particular way and that companies can’t be forced to decrypt communications if their systems are designed such that they don’t have the keys. There is also an exception for Internet companies like Google, which provide services on the Web but not access to it.

Taken together, Apple argued, these limitations in CALEA express Congress’s intent to bar the government from requesting technical modifications like the ones that the FBI now wants. On Monday, a federal judge in New York rejected the government’s request for a similar iPhone-unlocking order on the basis that congressional intent—including the language of CALEA—implicitly prohibited it.

“We’re talking about the value that signatures have, and how they’re really a lot like physical signatures.”

Cohn, too, agreed with Apple’s reading of CALEA. She also dismissed the notion, advanced by the government, that the ban on demanding specific equipment design—one of the provisions that Apple stressed the most—only applied to the initial design stage of a product before it went to market.

If that were the case, Cohn said, CALEA would be toothless, because it wouldn’t prevent the FBI from subsequently going to an equipment maker and demanding modifications on a specific device—exactly what it wants to do in the San Bernardino case.

“Congress would have passed the law that was pretty useless,” she said. “If it only talked about the first time you rolled out a thing, but the minute you rolled it out, the FBI could come up and make you modify it so it didn’t do that thing anymore, it wouldn’t be a particularly useful protection.”

Analyzing the Justice Department’s use of the All Writs Act—which lets courts issue any orders necessary to carry out a ruling—Cohn argued that the government’s position in the San Bernardino case reflected exactly the kind of broad-brush precedent setting that Apple feared.

Correction: Of the two creators of the Diffie-Hellman encryption protocol, only Hellman has signed onto the EFF’s brief in the Apple case.