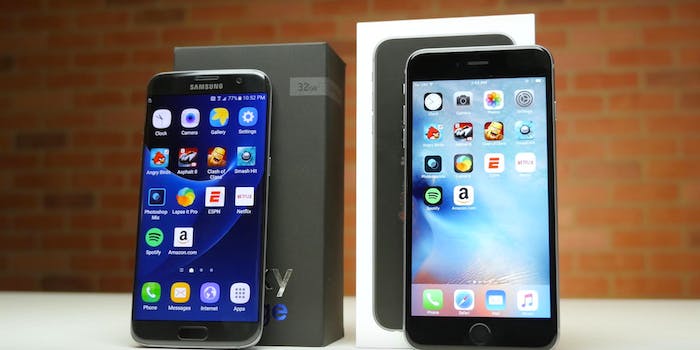 Mac versus PC, iPhone versus Android—these are the wars on the Internet that never seem to have a ceasefire. Rarely is there a definitive winner in these arguments, but you can put one in the win column for Apple after a speed test put the iPhone 6s Plus up against Samsung’s Galaxy S7 Edge.

The latest flagship phone from Samsung was released just last week, and dropped with an impressive spec sheet. The Korean electronics manufacturer stuffed its handset with the 64-bit quad-core Snapdragon 820 processor, the newest and best offering from chipmaker Qualcomm. Accompanying the powerful CPU is 4GB of RAM.

The iPhone 6s—released back in September 2015, a full six months ago—also sports a 64-bit architecture processor in the form of the Apple A9. The Cupertino company put half the amount of RAM in its device compared to Samsung’s offering just 2GB.

Going by the tale of the tape, one might expect the Galaxy S7 Edge to blow the iPhone out of the water, but specs don’t tell the whole story. YouTuber PhoneBuff put the phones through a variety of tests to determine their speed.

Through a test that requires each device to quickly open a variety of apps ranging from system-specific to resource-hogging services, the iPhone beat the Samsung Galaxy s7 Edge rather easily.

The iPhone completed its first lap through the challenges in one minute and 17 seconds—netting a 16 second lead over the Samsung handset. Lap 2 yielded no better results for the Galaxy s7 Edge, as the iPhone added nearly a half-minute of separation.

The test isn’t the be-all, end-all determination of performance, of course; there are plenty of ways to come up with ways to measure speed and power when it comes to smartphones. But this particularly practical look at how the phones perform came to a clear conclusion: the iPhone is faster.

Take that ammunition into your next flame war, Apple fanboys.