Free games on the iOS App store are dead. Kind of. You can still get them though. Literally. And they might inspire change for indie games.

Apple has changed the label on all free-to-play (F2P) games in the App store from “free” to “get.” Google recently did the same thing. The driving force behind the new naming schemes is concern from the European Commission about unauthorized purchases by children.

Even if the button to download a F2P game has been changed from “free” to “get,” there is still a free category for iOS, and you can still find games there. So is this strictly a change in nomenclature that appeases the concerns of trade groups? Will it ultimately be irrelevant, or do developers of F2P games have something to fear? 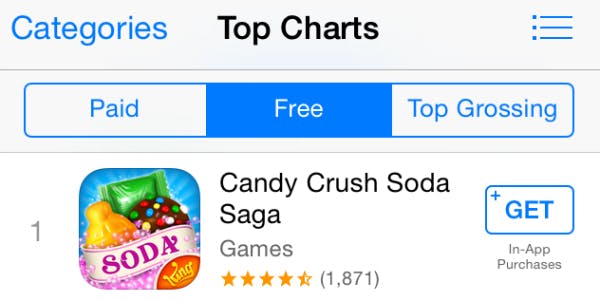 Seth Sivak is the CEO of indie game studio Proletariat, Inc. based in Cambridge, Mass. His studio is currently developing a F2P game called World Zombination which marries the sort of cooperative social systems one finds in Clash of Clans to moment-to-moment gameplay that harkens to real time strategy games. We asked Sivak whether he expect this change to have an affect on his business model.

“I think it will have some impact. The idea of free is very important psychologically to how these games are perceived. Just look at the ads used everywhere, they call out that the game is free and that players should get it right now,” Sivak told the Dot via email. Internal user testing at Proletariat indicates that cost is a motivation in whether or not players will choose to return to World Zombination.

Video game research and consulting firm EEDAR has data that backs up Sivak’s concerns. In their “Deconstructing Mobile & Tablet Gaming” report from 2014, EEDAR presents research that indicates 66 percent of all mobile gamers choose to download mobile games as a result of their price. It’s the number one reason cited. 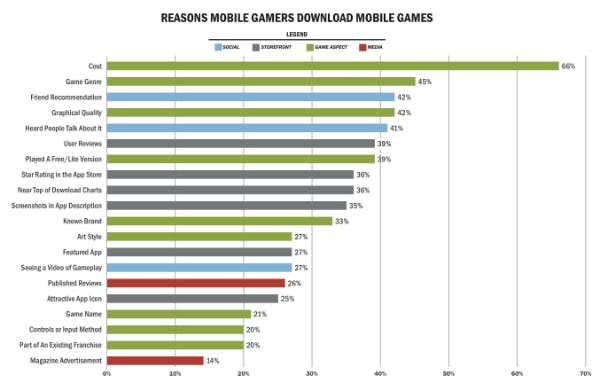 Ben Cousins is a veteran of the triple-A video game industry. He was an executive producer at Electronic Arts/DICE on the Battlefield franchise, and also worked for Sony Computer Entertainment Europe as a creative director. Cousins worked on free to play games for EA from 2008 to 2011, and has since worked on free-to-play shooters on mobile platforms.

At a Game Developers Conference talk this year in San Francisco, Cousins presented data from the Federal Trade Commission and EEDAR which suggest that somewhere between 0.5 percent and 2.4 percent of all purchases on the App Store represented unauthorized purchases by children. This, in turn, suggests that any changes to the mobile game industry as a result of this switch in labels from “Free” to “Get” may not have marked changes on the market.

“If you talk to pretty much anyone in the F2P industry they generally are clear that as far as they know, children’s unauthorized purchases and accidental or ‘coerced’ purchases by adults make up a tiny proportion of spending,” Cousins told the Dot via email. “In the U.K. we’ve had the [Office of Fair Trading] and the [Advertising Standards Authority] ask developers to make changes to app descriptions and advertising, but there has been no change in the performance of the business. Apple also recently made changes related to authorizing purchases and downloads on the App Store. I’m convinced that this change from ‘free’ to ‘get’ will have similarly no measurable change in business either.”

Keith Katz is the business chief at Execution Labs, an indie game accelerator based in Montreal. When the company was launched in 2012, it was focused primarily on mobile game development. Execution Labs has since expanded its program beyond specific support for mobile devs, and it has also reduced their focus on mobile F2P games over the last 12 to 24 months. The change was informed in large part by how difficult it is for indie developers to penetrate the App Store. Katz is cautiously optimistic about the change.

“This change in and of itself won’t impact indies, because—as noted—the App Store is already impossible for them to play in. However, if this indicates a longer term merchandising change in the App Store, we are more excited. If, for example, Apple de-emphasizes the ‘top grossing’ and ‘free’ rankings, there could be opportunities for premium indies to get discovered and remain in the top charts (note though that the category housing F2P is still called ‘free’ even though the buttons say ‘get’). But this seems like something that’s a long way off, and it may never happen,” Katz said.

In terms of how we’ll know whether the new label actually changes how the F2P mobile game market operates, Cousins had the following to say on Twitter:

If this change from 'free' to 'get' makes any difference, it should be traceable in an immediate bump in grossing position for premium apps

In other words, if you look at a chart that measures gross profits, and a F2P game and a premium game are currently sitting next to another, we should see the unaffected premium game begin to rise up the chart and leave the F2P game behind (should the new labeling change things). According to Cousins, we should see that happen immediately.