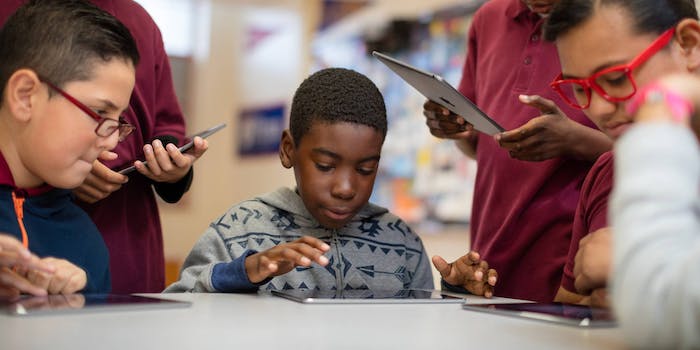 iPads, Macs, and a robust infrastructure are changing how kids approach learning

ConnectED is a national initiative combining government and leading technology companies to bring tech to underserved schools. The president’s ConnectED program aims to connect 99 percent of American students to high-speed broadband in their classrooms by 2018. The five participating schools in Compton are using the technology to redefine learning, and get some of the most at-risk kids in the country off the streets and into classrooms. 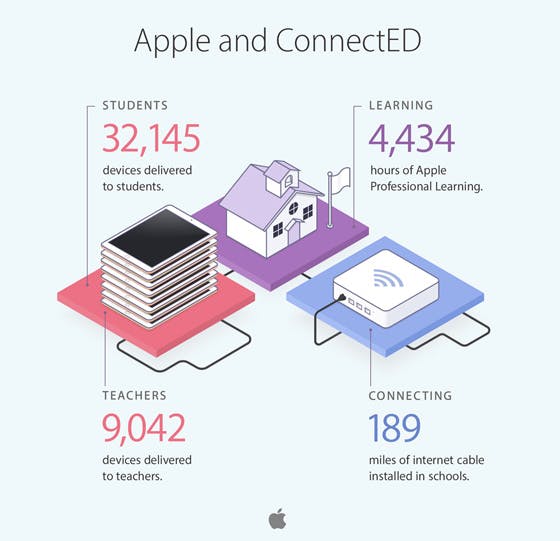 At the iPhone 7 announcement on Tuesday, Tim Cook spoke about the initiative and the $100 million pledge Apple made to the program. “We’ve always believed that education is a great equalizer. It’s a powerful force of change for good and we’ve always believed that our products could have a tremendous positive impact on teachers and students,” said Cook. “But we are keenly aware that not every school can have this impact. And That’s why we are so deeply committed to ConnectED.”

Apple delivered on its pledge four months ago in Compton at Walton Middle School, Bursch Elementary, Jefferson Elementary, and two other schools after spending nearly a year building out the necessary infrastructure. “We started planning with Apple in march of 2015, they set up our MDM system, wireless and robust Wi-Fi and we worked on a strategic plan to ensure our schools really had the capacity to do the innovative work we want to do,” Dawson told the Daily Dot.

The tech giant donated iPads not only for students at the schools but also sent Macs and iPads to every teacher, as well as equipped the classrooms with LCD screens and Apple TVs. The school district is focused on integrating technology in a way that goes beyond just putting computers into a classroom and instead fundamentally shifts the way technology is used to fit the learning environment. “If you don’t change practice and you just hand teachers devices you’re going to get the same results. It’s not about just dropping technology in a classroom,” said Dawson.

While the program is still in the early stages in Compton, educators there say they have already seen the transformational impact the technology has had on students. “We have seen attendance shoot up. We’ve seen kids who weren’t very interested in school become fully engaged, and now those same kids want to go to our Saturday program to use iPads,” Dawson explains.

The schools also provide parents with access to devices and opportunities to learn more about technology. “With our iParent program we’ve developed systems, structures and guides for parents on the use of technology. A lot of our students have computers at home but may not have wifi access. This is giving them the kind of access that many don’t have,” said Dawson.

Access they hope will reduce the likelihood any of these kids or their parents will become yet another static in a neighborhood known for high mortality rate and gang violence. Educators there say introducing kids to technology at a young age will prepare them for a future that is limitless. “We are giving our kids the cognitive and social skills they need to function in the 21st century workplace,” said Dawson.

By making learning student centered, more personalized, engaging and rigorous Dawson believes her students will be prepared to take on jobs at companies like Google and Apple. “In our digital world, our students need to have collaboration and critical thinking skills. They need to be able to solve real world problems and use design thinking to figure out those solutions,” Dawson explained. “Technology is the vehicle to start solving those real world problems.”

The students have already started to create solutions to a simple problem they face living in California with a recent project geared toward earthquake preparedness. “About a week ago the students worked on a earthquake PSA,” said Dawson. She says the kids are already thinking about ways they can improve their circumstances and create solutions for their community.