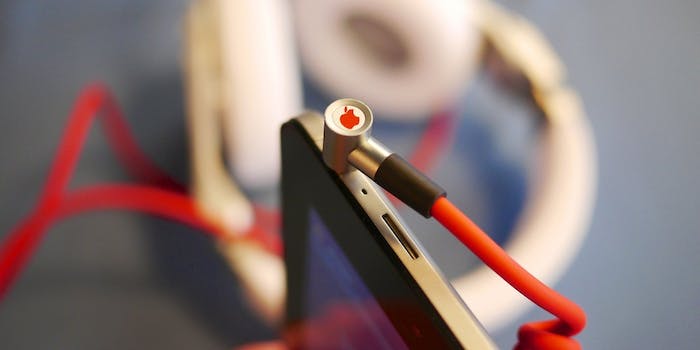 Beats is now officially a part of Apple

Apple is now the official maker of overpriced headphones.

Beats is officially a part of Apple.

Apple has closed the deal with Beats Electronics, and the headphone maker has officially joined the world’s largest technology company.

In an internal memo obtained by The Daily Dot, Apple executives Eddy Cue and Phil Schiller notified employees today that Beats has officially become a part of Apple. Apple is will cut 200 jobs from Beats as it brings the two companies together, according to Bloomberg. Beats has become a subsidiary of Apple and will retain its branding.

On behalf of all Apple employees around the world, we would like to extend them our warmest welcome.

Music is in our DNA. In Beats, Apple has found a team of creative and talented people who are as passionate about music as we are.

Jimmy lovine, Dr Dre and the team that has built Beats have created music products that customers love. And what we will do together is going to be even greater than what we could have done on our own.

This is going to be a lot of fun!

Beats also put a statement up on beatsbydre.com:

There’s a new instrument in the Apple family. Musicians rely on their instruments to give structure and form to their imagination. At the dawn of digital recording, the Macintosh computer was the instrument of choice. At the beginning of portable digital music, the iPod placed the library of the world’s music in your pocket.

The iPhone became not only an instrument for music but also the center of your connected life. The iPad extended this capability with a user interface and apps that allowed you to compose a symphony on the subway. Starting today, we at Beats are fortunate to add our instrument to this legacy by joining Apple. The products we build together will allow us to reimagine sound once again and to continue this great tradition of bringing imagination to life.

Online sales of Beats products on beatsbyre.com will be rerouted through Apple’s online store going forward.

Photo via Janitors/Flickr (CC BY 2.0) | Remix by Fernando Alfonso III