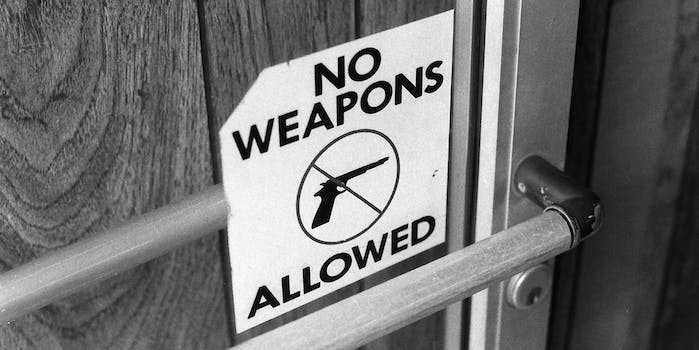 Mobile developers make more money off of Apple’s digital marketplace than any other, but publishing an app through the App Store means playing by Apple’s rules. Those rules are constantly changing, and sometimes they don’t make a whole lot of sense. The latest rule change slowly spreading through the store targets something that is ubiquitous in video games: guns.

Several developers have said that Apple has asked them to remove images of firearms from promotional screenshots that appear in the App Store, even going so far as to reject updated versions of their apps if the images contain gun-related imagery. This has forced many developers to not only blur or pixelate any guns that might appear in their game screenshots, but also redraw any promotional artwork so that the weapons don’t appear.

Examples of the odd shift in App Store guidelines have been popping up all over, and some of them are quite drastic. Below, you’ll see the artwork for an action game called Tempo. Its developer not only redrew one of the main protagonists so that his weapon wasn’t visible but also removed a tank from the background and zoomed the image in so as to hide the firearms held by other characters. Apple has no issue with firearms appearing in the actual games; they simply don’t want images of the weapons to appear in the App Store. It’s a very weird and very fine line, but when you decide to develop for Apple’s platforms, this is the kind of thing that you simply come to expect.

This isn’t the first time Apple has spontaneously changed its submission rules without warning or further explanation. The company recently banned some apps from performing certain functions via their built-in widgets, before reversing that decision just days later. Some low-res, pixelated butt cheeks also caused problems for the developer of Papers, Please, who was asked to remove them before being told that the decision had been reversed.

It wouldn’t be entirely surprising to see Apple once again allow firearm imagery in its digital marketplace. It seems that not all apps are being targeted by this rule to begin with, a discrepancy that only further clouds the issue. As great as the App Store is, there’s one thing you definitely can’t count on within its walled garden: consistency.