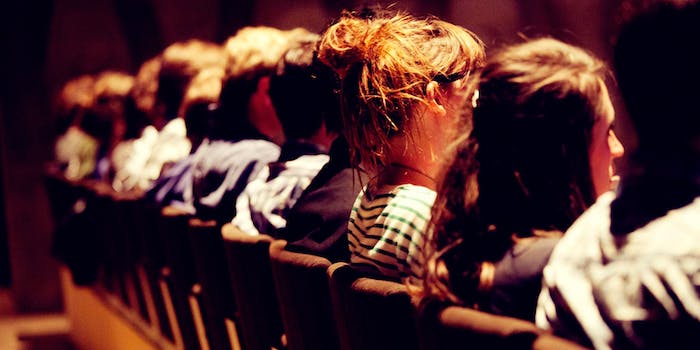 Will companion apps ruin the movies, or save them?

Soon, you could be encouraged to use your smartphone during a movie.

Nearly every big box release comes with its own app. These companion apps (consider the not-well-reviewed Fifty Shades Of Grey app, or the app that turns your spoken words into postcards as seen in the film Her) are fleetingly fun, and generally forgotten once a a movie leaves theaters.

They’re low-level tie-ins to the movie universe, not a means of enhancing and adding to the movie viewing experience.

But they don’t have to be. “Mobile phones are banned in theaters,” director Bobby Boermans told the Daily Dot. “Let’s try to change that.”

His film, a movie called App that was released last summer, not only encouraged the audience to use their smartphones, but had a plot designed to include that second-screen experience.

“Automatic content recognition technology can sync a phone to any soundtrack, and it’s already regularly used to enhance TV shows, but never in cinema,” said Boermans. Indeed, Shazam is very much on the rise when it comes to tagging television shows: Some 30 percent of Shazam users have used the app to tag shows, and the app’s television interaction doubled from 2013 to 2014. The second screen is real.

For some reason, though, it hasn’t been able to make it to the silver screen. With, of course, a few brave exceptions.

The app that accompanied App made your smartphone something of an interactive movie prop. The app “listened” along to the film and activated at various points, adding a layer of interactivity. Throughout the course of the movie, viewers recieved the text messages characters sent to each other in real time on their phones, or would see their own phones dialing a number.

One feature Boermans decided against implementing? “We would’ve loved Siri to activate in the middle of the night after you’ve seen the movie. That would’ve been great, but it also has to do with money.”

App hit DVD in December 2014 and was largely a hit in the Netherlands. The movie revolves around a woman’s relationship with her smartphone’s digital personal assistant, named Iris (savvy readers will no doubt notice that this is “Siri” backwards). What begins as a beneficial relationship between woman and gadget quickly turns frightening.

This marked the first time that a film put this technology in the hands of the viewing audience. Major Hollywood studios use this same technology, but they’ve previously kept it to themselves as a means of preventing piracy. By hiding a special timecode in the soundtrack, they can identify when and where an illegal copy of a film was made. This is exactly how studios hunt content pirates on a mass scale. After some negotiations, Boermans convinced them to let it be a creative tool for filmmakers, too. “Young kids have another screen inside their pockets. Let’s try to make use of it,” he said.

So when will more producers start taking advantage of this technology? Despite the pleas, movie-goers continue to use their phones during films, and some theaters are even considering allowing texting. Perhaps it’s time to see smartphones as interactivity aids instead of distractors.

App isn’t alone: When The Little Mermaid returned to theaters in 2013, it came with an app experience for iPad users as well. These are among the first attempts at second screen movie apps, but they won’t be the last. The trick, as Boermans explains, is picking and choosing.

He says it makes most sense for action thrillers and sci-fi films—it doesn’t really work for drama. It worked for App, he says “because it’s storytelling, not a technical gimmick.”

Now we’ll just wait and wonder: What movie and its app are coming to a theater near you?