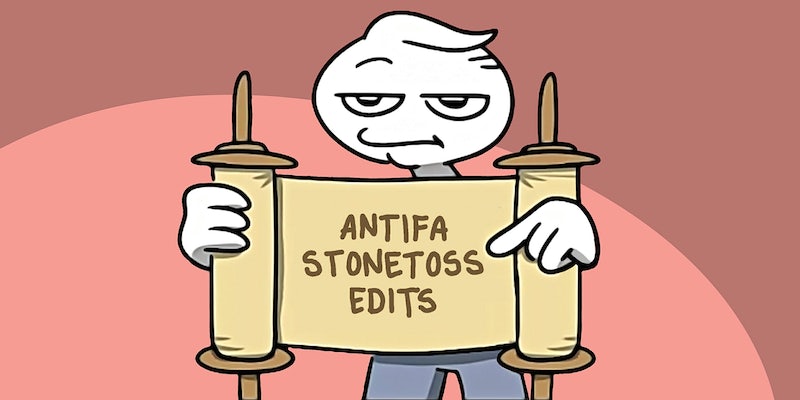 The Stonetoss comics gained widespread notoriety and criticism online since they first appeared in July 2017 for not only mocking left-wing politics but promoting Holocaust denial, racism, homophobia, sexism and anti-Semitism.

The community at r/antifastonetoss, however, launched in January with the sole mission of repurposing the far right comics as progressive memes. Over 27,000 subscribers, who call themselves brickthrowers, download Stonetoss exploitables or templates hosted on the subreddit and create their own remixed comics.

According to these antifa redditors, the Stonetoss comics are much more sinister than the “edgy humor” their creator says they are.

“To the best of our interpretation, he truly believes what he’s saying. He hangs around with other alt-right artists, he attacks his critics by pointing out they’re furries or trans on Twitter, and he says a lot of horrible shit about Jews,” Moderator CriticalResist8 writes. “So we’re way past the point of it simply being offensive humour.”

It’s for this reason that the brickthrowers want to disarm the messages contained in the comics, which they insist are used to radicalize moderates by appealing first to the anti-PC hostility—which is a hallmark of populist right-wing politics—then introducing extreme talking points like Holocaust denial.

“It’s not mild conservatism, it’s exactly the kind of shit we saw in Nazi Germany building up before they started deporting everyone,” CriticalResist8 continues. “To be clear: if you consider yourself right-wing, either centre-right, or classical liberal, or libertarian or whatever, you have to distance yourself from the fascists who purposely try to make themselves look moderately right with edgy humor.”

Indeed, Stonetoss’ most reactionary themes have won him many fans on the extreme political right. Official Stonetoss communities on Reddit and Discord were both banned earlier this year, in March, within weeks of one another. One scathing commentary blasted the old subreddit as “a Neo-Nazi hive.

The self-described political artist behind Stonetoss allegedly started out making the alt-right Red Panel webcomics, which are still active, before pivoting to the current and more controversial content under the new brand in July 2017. The central hub for fans these days appears to be the Stonetoss Twitter account, which boasts over 27,000 followers.

Antifa meme warriors are not the only community subverting Stonetoss comics. Other big subreddits like r/Stonetossingjuice swap right-wing ideas for jokes and humor into templates, instead of countering with leftist talking points.

While their approach might be different, what both groups unite in characterizing Stonetoss on their subreddits as a neo-Nazi whose agenda, they say, is radicalization through his art.

In dismissive response to the question of whether he is an “evil Nazi” on his website, the artist denies jokingly that he is a member of German dictator Adolf Hitler’s National Socialist German Worker’s Party.

Antifa redditors say this is simply a deflection, rather than a denial, while others show evidence of their belief by pointing to far right dog whistle messaging subtly worked into elements like the Stonetoss website’s CSS stylesheet—called “stylesheet88.css” in a nod, they say, to the Nazi numeric hate symbol.

For most though, the comic strips provide enough evidence to make a call on the political agenda of the artist whose far-right ideas are the latest battlefront in the eternal internet meme war.