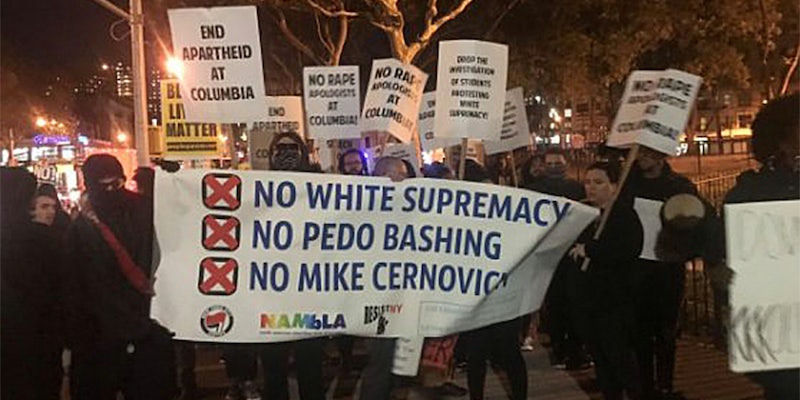 A reporter on the scene has offered a different explanation.

On Monday night, right-wing provocateur and journalist Mike Cernovich spoke at Columbia University in New York City. The event was beset by protestors, some of whom were carrying a pro-pedophilia sign. While many were quick to attribute it to antifa, the left-wing organization claims the sign was planted by trolls.

Here’s a short video that captured the event:

The post was originally tweeted out by Cernovich and liked by Donald Trump, Jr.

It’s curious that an organization that doesn’t have a pro-pedophilia stance (antifa’s only stated position is being anti-fascist, hence the name) would come to a Cernovich event endorsing pedophilia, and that it would clearly identify both NYC Antifa and NAMBLA (North American Man/Boy Love Association). But antifa’s anonymous nature—its members typically wearing black and cover parts of their face, and there’s no hierarchal structure—it’s easy for anyone to look the part and claim their actions are on behalf of the group.

The banner, which is being carried by three individuals, two of which are wearing the usual Antifa attire, reads, “No white supremacy, no pedo bashing, no Mike Cernovich.”

A clip was also posted to Cernovich’s Facebook page and attributed to a co-documentarian of Cernovich’s, Scooter Downey.

Downey denied taking the film when reached by the Daily Dot, saying that Cernovich’s attribution must have been a mistake and that he did not see a sign while he was there.

The sign was first identified not by anyone on the right but by a reporter at Gothamist, who called it a plant by the “alt-right,” the loose collection of right-wing groups that harbor white supremacists.

In his InfoWars post, Watson says there was no evidence the sign was made by the right.

Others claimed the sign was made by pro-Cernovich people and handed to Antifa demonstrators to make them look stupid.

Even if this were the case, and there’s no evidence for it, the fact that the protesters didn’t even bother to check what was written on the giant banner before marching behind it doesn’t reflect very well on their intelligence.

There is also no proof the people holding it were associated with it. For their part, the NYC Antifa account on Twitter denied it was theirs.

Cernovich trolls come to antifascist side with absurd and offensive sign. Reportedly got chased off immediately
They may have fallen down… pic.twitter.com/t5DJPEqizw

“Cernovich trolls come to antifascist side with absurd and offensive sign,” the account posted. “Reportedly got chased off immediately.”

Update 11:43am CT, Oct. 31: In a post about his experience at the event, Gothamist reporter Jake Offenhartz, whose picture Cernovich used, wrote about the series of events before and after the banner picture was taken, reiterating that the sign was planted by those on the right.

“Someone said ‘hold this real quick’ and then they proceeded to snap pics,” Mistee Denson, a Columbia social work student and one of the organizers of the protest, told Gothamist. “Someone quickly realized what it said and ran them off. Unfortunately, they got what they wanted.”

Offenhartz snapped the picture and tweeted it, mentioning it was a plant, but media on the right ran it without that context, sparking the controversy.