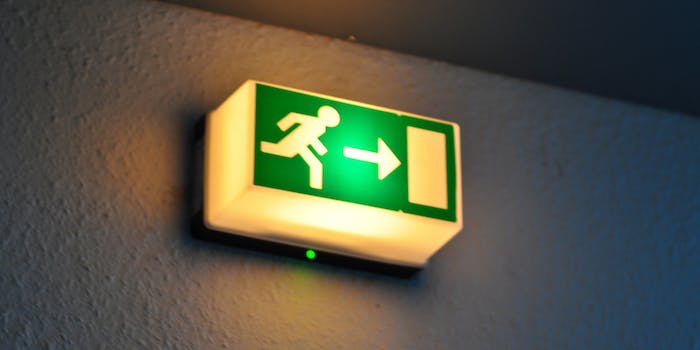 6 apps to get you out of any social situation

For those moments when you need a little alone time.

Facebook, Twitter, Foursquare, and the countless other social apps out there are all about getting you to interact with others. They’re great at what they do. Maybe a little too great. Technology has definitely figured out how to help us find people. But what about when we don’t want to find people? And when we don’t want people to find us?

Thankfully, there are some apps out there for the introverts. They take awkward interactions and distract you, help you plan an escape, or simply offer an endless list of excuses as to why you have to leave the bar, birthday celebration, or work party just a little bit earlier than everyone else.

It might pain you to admit it, but some friends are worse than others when it comes to casual social interactions. Time to Split connects to your Facebook, Twitter, Instagram, and Foursquare accounts and lets you choose specific friends who you wish to avoid. If one of those individuals comes a little too close for comfort, a notification will alert you of the impending social dangers and give you a clear path to safety. It’s great for shopping trips and running errands if you just want to get things done and not worry about being dragged down by a half hour convo with that friend who talks just a little too much. Ever had to take a fake phone call in order to escape some unwanted social pressure? Fake Conversation makes that handy little trick a whole lot easier by providing not only a ring for your fake call, but also a script for you to recite that will help you sell the lie for anyone within earshot. Knowing you enemy is half the battle… and knowing where they are is also part of it. And if your enemy is an awkward run-in with a coworker or old friend, then Cloak is your secret weapon. Like Time to Split, Cloak scrapes your social networks for location data on your friends and alerts you when one or more of them come within a certain distance. It has an easy to use, no-nonsense interface that does one thing, and does it very well. If you’re an Android user looking for an alternative to the iOS-exclusive Fake Conversation app, Fake Call & SMS is your best bet. It has a super slick “quick call” feature that lets you preset a fake call alert at a preset time, and also features a nifty fake text message alert as well. It’s extremely useful for giving you an excuse to duck out of social obligations early, and nobody will suspect a thing. The iPhone’s text conversation notifications are the most easily identifiable on any mobile platform today, and that means you need a perfect replica if you’re hoping to fake a conversation that gets you out of a social situation. New Message Pro looks exactly like the default iOS chat notifications and lets you script conversations that make it look like you have a pressing issue that needs immediate attention. The only hitch might be that identifying green SMS icon; if you’re trying to fake a high profile conversation, chances are it’d be blue. Just saying. Getting a text invitation to an outing you simply don’t want to attend is dreadful. The longer you take to reply, the more likely the person on the other end will assume you’re just making up an excuse, but Excuse Text Generator helps you send a lightning-quick excuse no matter what the occasion. A night at a crappy bar? Sorry, my car is at the mechanic. A movie you don’t want to see? That sounds great, except I have a horrible migraine and need to sleep it off. Dinner with the in-laws? Not tonight, my Shaman decided to hide all of my underwear while I was in the shower.

Photo via Metaphox/Flickr (CC BY SA 2.0)