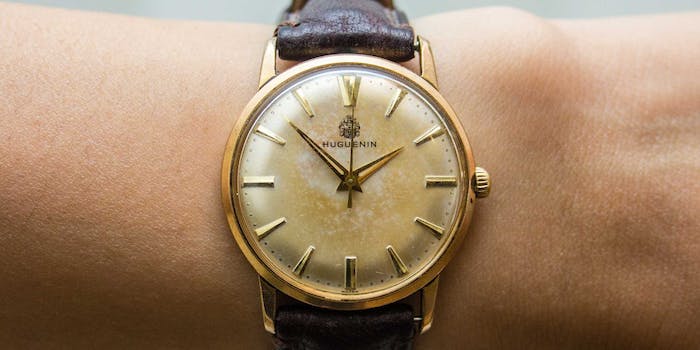 The rise of the anti-smartwatch

As a reaction to the rise in smartwatches, artisans compete by tapping into tradition.

As watches get smarter, so do the entrepreneurs who view timepieces as more than a wearable that tracks your footsteps and connects to your smartphone.

One of the current trends in horology (the art or science of measuring time) is reminiscent of Newton’s Law: For every action, there’s an opposite and equal reaction. As Apple, Samsung, LG, Pebble, and others try to outdo one another in the smartwatch market, a number of startups have surfaced, and they’ve got a rather contrarian view of where this industry is going.

“I think whenever you see a new tech like smartwatch being introduced, you see a pushback,” Zack Sears, a Kickstarter employee who used his company’s platform to launch Throne Watches, told the Daily Dot. “I don’t want any more screens in my life. There is something appealing to a personal product that doesn’t go out of style and doesn’t need to be updated.”

Driving this renaissance for traditional timepieces are artisans wanting to expand their creativity into new areas, an homage to a tradition of subtle sophistication, and a means to counterbalance—if not slow down—a rush to turn every personal accessory into a tool that measures matters that go far beyond the time of day. Crowdfunding sites like Kickstarter and Indiegogo are full of entrepreneurs wanting to extend the elegance of time-honored timepieces. The new-school watchmakers target supporters who are willing to donate relatively small sums in exchange for the privilege of getting first dibs on their finished masterpieces.

Going against the grain is a major motivation for the surge in handcrafted watches. Taking it even a step further is Martins Vidruskis from Southampton in the U.K. His Kickstarter project is an eco-friendly watch, NinetyTwo. Its overly simple design looks even more minimalist in contrast to the Apple Watch and its competitors.

“To even call smartwatches ‘watches’ is a stretch. They are more like a computer attached to your wrist than a watch.”

“As the market actually is being overwhelmed with all the different types of smartwatches, fitness watches and other gadgets, my thought is that it slowly starts to make traditional watches fade away, by everyone being amused of the ability to speak, write, and play games on their watch, which completely takes away the essence of a watch,” Vidruskis told the daily Dot. “They are being called ‘timepieces’ because they tell the time, and that’s the main reason for having a watch, everything else is just a fancy technological era fashion which is not necessarily needed.”

The U.K. designer explained that the abundance of specced-out smartwatches inspired him to go as “natural” as he could with his design, choosing to use bamboo as a medium. “As more and more people are becoming aware of how ecological thinking can help prevent degradation of our planet, using a fast growing material to create uniquely designed watches might help to get back to the basics of the watch—knowing the time on your wrist, [with] a unique shell to show off your awareness of the environment, yet be stylish at the same time.”

Jared Nanasy has high hopes for his Kickstarter-based Votum Watch project, which he calls affordable minimalism. Nanasy is another whose work is a reaction to the growing glut of fitness- and health-trackers in the guise of a timepiece.

“The fact that smartwatches are somewhat taking over is part of the reason why I wanted to do this,” Nanasy told the Daily Dot. “To even call smartwatches ‘watches’ is a stretch. They are more like a computer attached to your wrist than a watch. Nothing against them, I just don’t believe that they belong in the watch category. 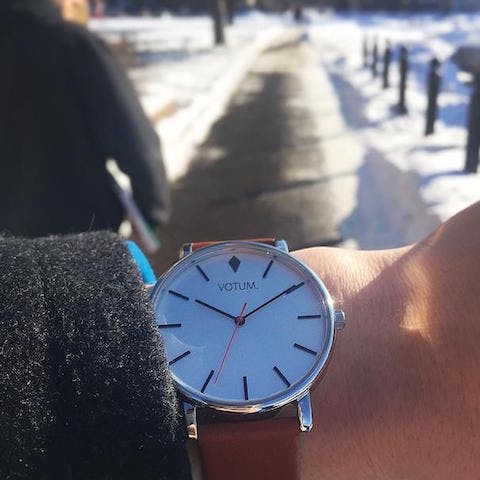 “Even with the rise of smartwatches, there is still a market for “normal” watches,” Nanasy added. “You can see that when you go on Instagram, Facebook, or even just browsing online, I believe that there will always be a demand for a nice, clean wristwatch no matter how smartwatches evolve and change.

“When designing the watches I wanted to keep this in mind. So when I was designing the watches, I wanted to get rid of any unneeded features. But I also wanted to create a classic-feeling timepiece with a modern look,” he added. “Back when watches were first making their impact in the world, the designs were very simple and got straight to the point, which was simply telling the time.”

Watchmakers are certainly passionate about their projects, and that emotion often comes through in their crowdfunding campaigns. The description of the Frank Diamond Watch crowdfunding campaign waxes eloquently about the role of design in its timepieces by evoking the striking architectural image of the Golden Gate Bridge.

“Because the bridge is simple sound and strong. A timeless piece that will never lose its beauty while other structures might wow you initially, but the impact they have fades with time.”

“My passion for watches has been since I was young and continues till today,” Frank Lewis, cofounder of Frank Diamond Watches told the Daily Dot. “As a watch collector, I have many watches from the most-known manufacturers, but the day I started to make my own watch, I realized there is something missing in the market, something that would change it.”

While the smartwatch market is clearly an innovative and experimental one, traditional watchmakers aren’t done yet. Though some are beginning to allow digital influence to seep into a time-honored tradition, others yet are holding their ground, letting the deluge of technology in our lives shape their creations in another way. Smartwatches are guiding them to appreciate and embrace simplicity, rather than compete.

“When passion and creativity meet together in the right way, then the results are usually something extraordinary,” added Lewis. “Something that differs from the competition, something unique, and something that will achieve great success.”