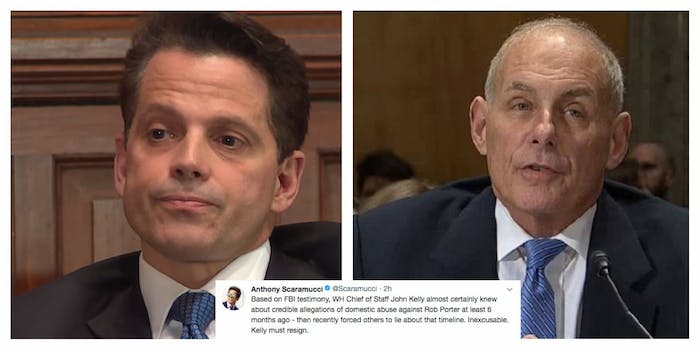 Scaramucci wants the man who fired him out.

The person who ushered in a new era of chaos is now publicly calling for the ouster of the man brought in to bring back order to the White House. Anthony Scaramucci wants John Kelly out as chief of staff.

Scaramucci was infamously fired 10 days into his job by Kelly after Kelly took over as chief of staff. Originally, after the former chief of staff Reince Priebus was fired, it was speculated Scaramucci would be up for the job. Instead, it went to Kelly, a former general, who was tasked with bringing discipline to the White House and summarily fired Scaramucci.

But now Kelly is under fire for possibly lying about his knowledge of Rob Porter’s alleged domestic assault. Porter was the White House staff secretary until Daily Mail reported his two ex-wives said he abused them. Kelly told White House staffers that he had acted within 40 minutes of finding out about reports Porter’s abuse, but that is now being contradicted by both anonymous White House staffers and FBI Director Christopher Wray.

With that in mind, Scaramucci is publicly calling for Kelly to be fired for protecting an alleged domestic abuser.

I do. Enough is enough. Real leadership is required here. #dotherightthing https://t.co/LilkO1pVBS

Based on FBI testimony, WH Chief of Staff John Kelly almost certainly knew about credible allegations of domestic abuse against Rob Porter at least 6 months ago – then recently forced others to lie about that timeline. Inexcusable. Kelly must resign. https://t.co/ydt7dmD7xs

When said that his tweets regarding Kelly looked “petty,” given his history, Scaramucci said there was nothing personal about his speaking out.

Domestic abuse is a red line. Covering up for it is indefensible. If speaking out against that makes me look petty, then so be it. This has nothing to do with my exit from WH. I trust the FBI Director in this matter, and so should you. We'll know the full truth soon enough. https://t.co/kWXdZHQmOH

This is the second time in two days Scaramucci has called for Kelly to be removed from his position.