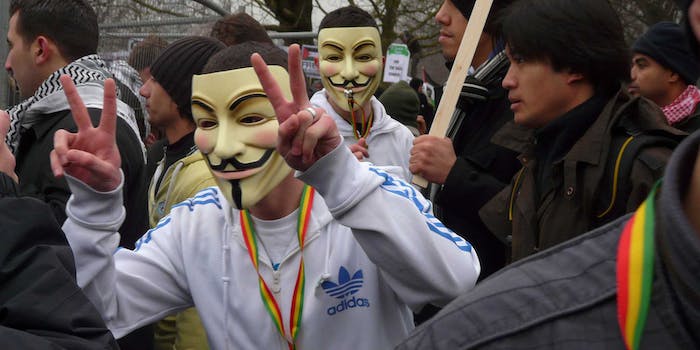 As the Israeli military and Hamas militants continue to trade rockets in a renewed phase of conflict, a notorious third party is stepping into the arena with an unconventional tactic. Anonymous, best known in the U.S. for its hacking and leaking campaigns against politicians and their corporate allies, announced on Sunday that it would “wage a cyberwar against the state of Israel.”

The announcement, posted on Pastebin, promises that “Israel will feel fear tingling in their servers, and homes” on Friday, but it does not elaborate on what specifically the country’s government or its citizens should expect.

“We’ve been fighting Israel and their terrorist state for over 4 years, and we have not grown weary or tired,” the group’s bold declaration reads. “It has only made us stronger.”

The announcement from the vigilante group follows a meeting of “an anonymous council” that deliberated for more than a week on how to respond to what it perceived as Israeli aggression. As Mother Jones points out, Anonymous’s new campaign joins a larger offensive, waged by hackers from the Middle East and other regions, to use cyberwarfare tactics to disrupt Israeli government websites. Anonymous officially endorsed the #OpSaveGaza offensive on Twitter last week.

#Anonymous: All Anons who wish to engage #Israel on the cyber field, #OpSaveGaza and #OpSave_Gaza is where you should sail your ships.

This is only the latest phase of Anonymous’s campaign against Israel. In November 2012, the Daily Dot wrote about the #OpIsrael movement, which saw Anonymous members offering “a care package for Palestinians that includes instructions in Arabic and English on how they can get their message out if Israel cuts off their Internet access.”

The Israeli government has not spoken to the media about this latest Anonymous offensive, but a spokesman for Israel’s National Cyber Bureau, which defends the country from cyberattacks, dismissed such campaigns in April 2013.

“Anonymous doesn’t have the skills to damage the country’s vital infrastructure,” said the NCB’s Yitzhak Ben Yisrael. “And if that was its intention, then it wouldn’t have announced the attack ahead of time. It wants to create noise in the media about issues that are close to its heart.”

Already the new hacking campaign has succeeded in taking down the Israeli defense ministry’s website (which was still down as of this article’s publication) and leaking an as-yet-unverified list of login credentials for the Israeli government’s official site, gov.il.