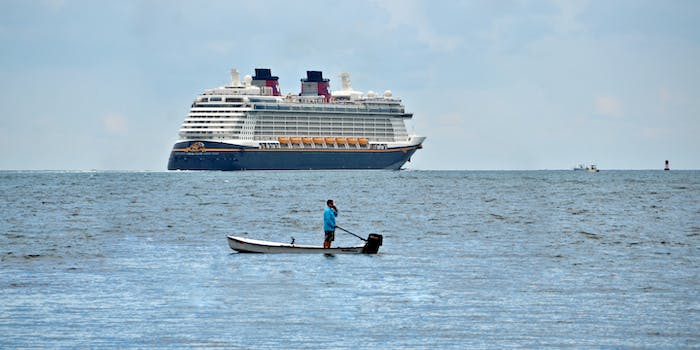 Alleged Anonymous hacktivist caught after being rescued by Disney ship

Martin Gottesfeld has been charged with conspiracy.

A Massachusetts man who allegedly conducted cyberattacks on a hospital has been arrested after being stranded in a boat near Cuba and rescued by a Disney cruise ship. He did so under the hacktivist guise Anonymous.

Martin Gottesfeld, 31, has been charged with conspiracy. He faces up to five years in prison.

According to an Anonymous video alleged to be Gottesfeld’s handiwork, he and colleagues were outraged at the treatment of Justina Pelletier, a Connecticut teenager who in 2014 was sent to a locked psychological unit at the hospital after arriving and complaining of gastrointestinal distress. Pelletier and her parents insist that contrary to the hospital’s position, Pelletier’s condition was purely medical, and not psychiatric.

According to FBI testimony in an affidavit provided to the Daily Dot by the Massachusetts District Attorney’s office, the YouTube account calling for the attack belonged to Gottesfeld, who was identified by his IP address.

Anonymous subsequently unleashed a distributed denial-of-service attack on the hospital, overwhelming it with traffic and forcing it offline. While DDoS attacks are common and usually relatively harmless, the testimony indicates that the hospital was woefully unprepared, and that the Massachusetts Treatment Center was offline for a week and spent $18,000 in getting online again. But since it also disrupted a fundraising page, the FBI estimates the attacks cost the hospital more than $300,000.

Upon being visited by the FBI, he admitted uploading the video, the bureau said, but he denied actually participating in the attacks. However, a further investigation of unencrypted content on his computer indicated he had a strong knowledge at least of how to carry out the attacks.

Since then, Gottesfeld has received regular wellness checks from the Somerville Police Department, where he lives. But last week, he was noticed missing, both by local police and as reported by his employer. His whereabouts were unknown by law enforcement until Tuesday, when he and his wife, stuck in a sailboat in the Atlantic Ocean, were rescued by a Disney Cruise Lines ship that responded to their distress call. He carried three laptop computers with him, the FBI said.

Cyberattacks on hospitals have grown increasingly common in recent months. Hurley Medical Center, in Flint, Michigan, where residents have been poisoned with lead in their water, has claimed to be the victim of such an attack, though the hospital refuses to provide details. And on Friday, California’s Hollywood Presbyterian Medical Center said they’re the victim of a ransomware attack, in which attackers encrypt a victim’s file and demand a ransom—in this case, over $3 million in bitcoin—to access them again.