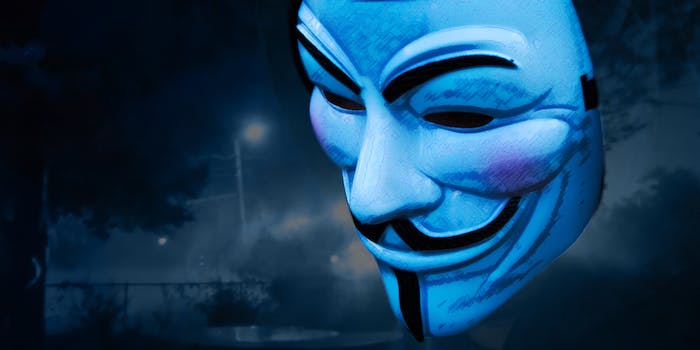 'We will amplify your voice where the mainstream media will surely fail you.'

Anonymous has set its crosshairs on Michigan Governor Rick Snyder for his part in the Flint water contamination crisis—but even the hacktivist group admits they’re late to the cause.

Anonymous Intelligence Group, an account associated with Anonymous, released a statement on Wednesday morning entitled “Anonymous Activates #OpFlint…And Yes It’s About Time!” The accompanying text and video begin with an acknowledgement that Michiganians have been in danger since April 2014. “For over a year now the citizens of Flint, Michigan have been subjected to drinking tap water filled with lead and other poisons,” the narrator says.

The video doesn’t explain any specifics of Anonymous’ attack plan, but assures those affected by the water crisis: “We will amplify your voice where the mainstream media will surely fail you, as it has in the past. We will also join you in calling bullshit on any spin that the corporate media is prepared to put on this.”

This announcement comes two months after four families filed the first federal class-action lawsuit against Governor Snyder and other government officials, one month after Flint Mayor Karen Weaver declared a public health state of emergency and four days after President Obama declared a federal state of emergency and granted $5 million in aid. All of these developments werecovered extensively by mainstream media.

This is just the latest example in a growing trend of reactionary Anonymous attacks. A Vocativ analysis of 95 Anonymous operation since the group’s formation in 2006 shows that many early operations helped draw public attention to—and inspire headlines for—issues like abuse within the Church of Scientology, internet censorship and child pornography. But more recent attacks like Operation Charlie Hebdo, Operation Paris and Operation Trump seem to be inspired by the headlines.