The product looks supiciously familar to others already on the market.

The inventors of the anonabox—the crowdfunded privacy-centric Internet router that’s raised almost half a million dollars—have been accused of lying to their customers and drastically misrepresenting the nature of their product.

Anonabox bills itself as “an open source embedded networking device designed specifically to run Tor,” and promises to allow its users to quickly and easily navigate the Internet anonymously. After months of ongoing global debate about government surveillance and privacy, the product could not have come at a more perfect time, and quickly blew past its funding goals on Kickstarter.

It hoped to raise just $7,500, but in 3 days the project has already made $483,955 as of press time, and is on track to pass the million-dollar mark by the end of the month—if it ever makes it that far. 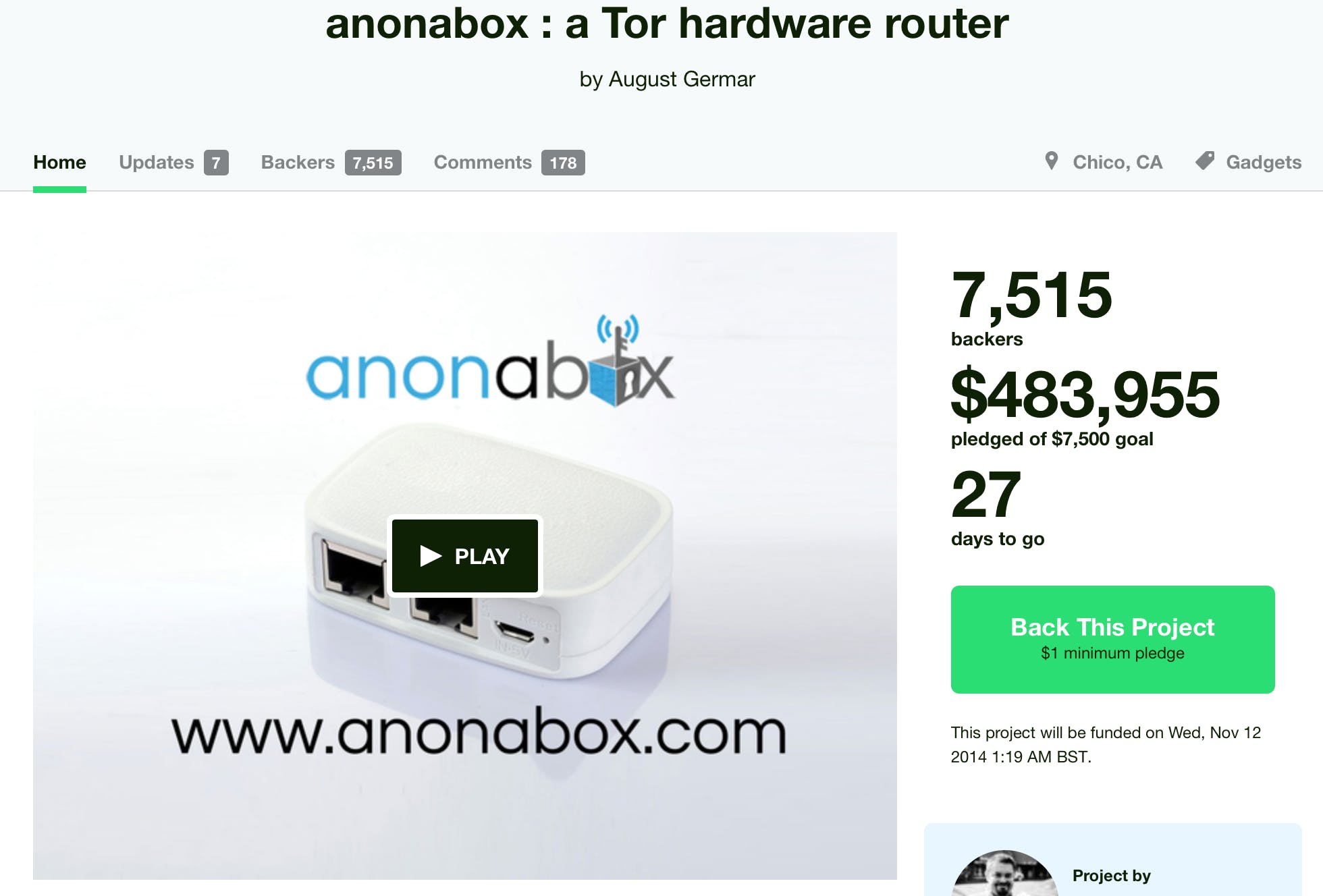 Because despite positive press coverage from the Guardian, TechCrunch, WIRED, ReadWrite and beyond, serious concerns have since been raised about the product, and it now looks likely that Kickstarter will suspend the crowdfunding campaign.

(Note: The Daily Dot has also previously written about the anonabox.)

For starters, despite claiming to have taken “four years” and four iterations of the product to get to the prototype design the anonabox is today, it looks remarkably similar—if not outright identical, barring branding—to a router available of Alibaba for just $19.62. This is despite the claims that “the first Generation [of hardware] was the only one with off the shelf hardware.”

Screengrabs provided by Redditors also show that the router’s internal circuit board looks almost identical to Chinese models already marketed and sold online. Others have pointed out that the circuit boards have identical model numbers to “off-the-shelf” routers already available online.

The lead developer August Germar took to the r/anonabox subreddit last night to answer questions about the project—and was immediately bombarded with messages highlighting the similarities between the anonabox and products already available to buy online.

The accusations that the anonabox is using a pre-manufactured Chinese circuit board is countered with the suggestion that the Chinese company might actually be selling anonabox’s design as their own, which Germar claims, is “totally fine with me.” 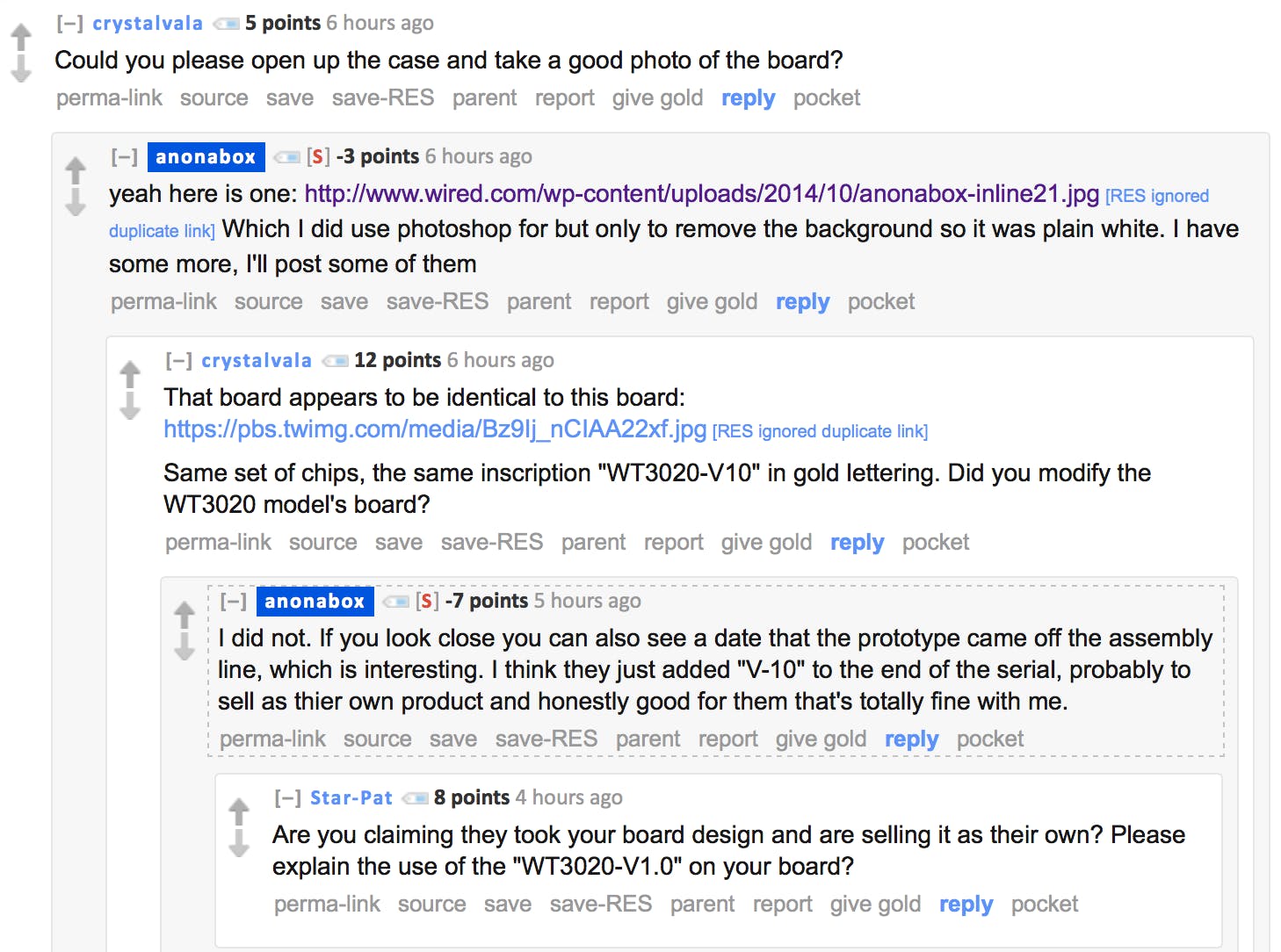 Redditor agamoto, meanwhile, has written a “tear-down” of the anonabox, putting together a list of what they believe the router’s component’s actually are:

In case anyone was interested in this things guts… It’s the NEXX[1] WT3020A board and case. Onboard is a MIPS 24KEc V5 580Mhz CPU, Mediatek MT7620N SoC, with a 16MB flash ROM and 64MB of RAM. The OpenWRT software written to that Mediatek chip is certainly open source. The hardware, not so much and now I’m having a difficult time accepting the story from August here about the Chinese manufacturer ripping off their design. They’ve had similar devices for awhile, eg. Their NEXX WT1520[2] , which is OpenWRT ready[3] as well.

If some or all of the hardware is indeed pre-designed, then it means anonabox’s claim that the product is 100 percent open source, including hardware, may be false—falling foul of Kickstarter’s stipulation that “projects must be honest and clearly presented.”

Kickstarter didn’t immediately respond to the Daily Dot’s request for comment, likely due to the time difference. But the crowdfunding platform has previously suspended campaigns that resell or “re-skin” products already available online, as was the case with the Panda Bamboo watch, which raised $70,000 before being suspended after the Daily Dot brought it to the company’s attention.

The anonabox team did not immediately respond to a request for comment.

Update 8:30am ET, Oct. 15: Developer August Germar told the Daily Dot that the device’s circuit boards were designed by an electrical engineer based on anonabox’s specifications, and that the company “found out tonight that there is at least one hardware product that is very similar, but… What makes the anonabox do what it does is the software and configuration.”

“If we could’ve bought hardware off the shelf and installed our image on it,” Germar added, “that would have been a lot easier, but we didn’t.”

Germar did not respond to questions asking whether any of the components were sourced from Alibaba, as Redditors claim.