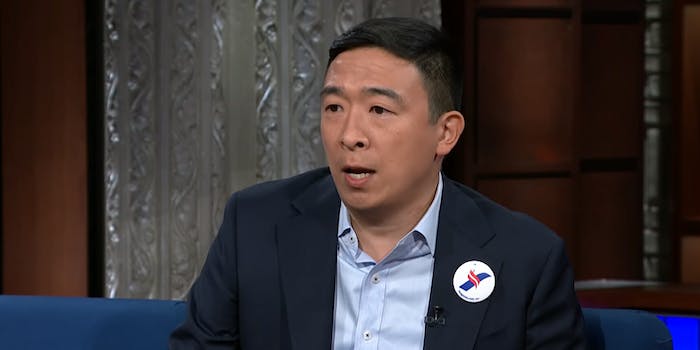 He made the announcement on the 'Late Show with Stephen Colbert.'

Andrew Yang, one of the numerous candidates who will be on stage in the first 2020 Democratic debates later this week, announced an offer of $1,000 a month to a contest winner during an appearance on the Late Show on Monday night.

The contest is meant to mirror the flagship proposal of his unexpected 2020 campaign: offering Americans a $1,000/month “Freedom Dividend,” more commonly known as universal basic income.

“I actually have an announcement tonight, I’m going to be giving $1,000 a month to another American family, and all you have to do is retweet the tweet that’s going to go out concurrent with this show… and then follow me,” Yang said, adding that the contest winner would be chosen on July 4.

Yang spoke about two families that are currently being given $1,000 a month in Iowa and New Hampshire: two early primary states that are typically seen as critical for candidates to do well in.

“I will give $1,000/mo for the next 12 months FREE to someone who retweets this and follows me by July 4th 😃 Let’s show why money is the answer & why this is the campaign for people. No purchase necessary. US citizens only,” he wrote on Twitter.

As of Tuesday morning, the tweet had around 29,000 retweets.

Earlier this year, Yang’s campaign told New Hampshire Public Radio that they checked with lawyers before giving its first dividend to a New Hampshire family. The funds are coming from Yang’s personal account, not campaign funds, which they believe doesn’t violate any election laws.

The Federal Election Committee declined to answer questions about “specific situations” when reached about Yang’s contest.

Yang will be on stage in the second night of the Democratic debate on Thursday along other 2020 hopefuls like former Vice President Joe Biden, Sen. Bernie Sanders (I-Vt.), Sen. Kamala Harris, and Pete Buttigieg, among others.