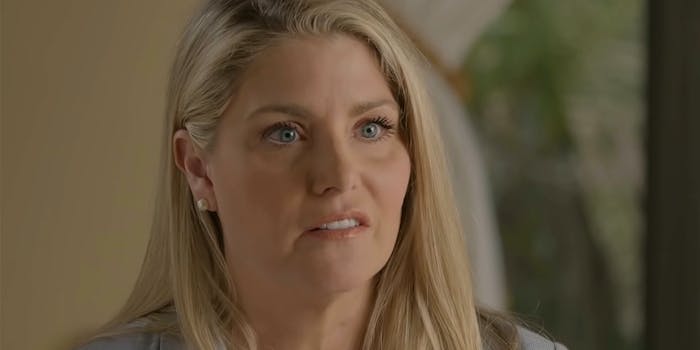 Dorris said Trump groped her at the U.S. Open.

President Donald Trump is again being accused of assaulting a woman, with model Amy Dorris saying the president groped her in 1997.

In an interview with the Guardian, Dorris said that Trump shoved his tongue down her throat in his VIP box at the U.S. Open tennis tournament in New York City. Dorris said the experience, where she also said Trump touched her body inappropriately, left her feeling “violated.”

“He just shoved his tongue down my throat and I was pushing him off. And then that’s when his grip became tighter and his hands were very gropey and all over my butt, my breasts, my back, everything. I was in his grip, and I couldn’t get out of it,” she told the Guardian.

Dorris provided photos to the Guardian showing her with Trump at the event. She says the incident occurred when she went to the bathroom, with Trump waiting for her outside when she came out. She says she told Trump “No, please stop,” but that he ignored her. At the time, Trump was married to his second wife, Marla Maples.

Dorris becomes one of over two dozen women who have told their stories of the president violating them during his time as a real estate magnate and reality TV star.

Dorris said she considered speaking out when Trump first ran for president in 2016 but did not want to bring harm to her family. She said that as her daughters have grown up she wanted to speak up about it for their sake.