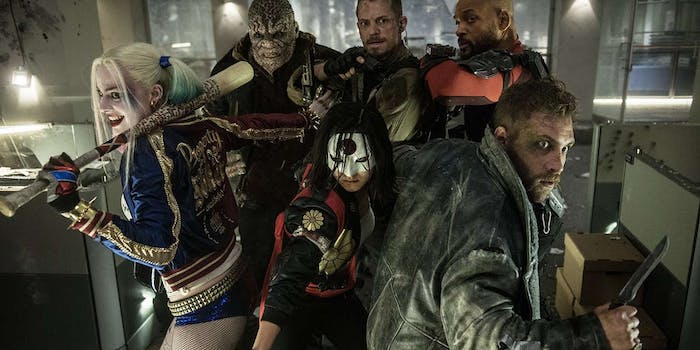 The movie's issues go much deeper than Chris Kyle's bravery.

Talk show host and Iraq war veteran Adam Kokesh recently shot a video of himself standing outside a mall movie theater in Santa Monica, Calif., to ask people who had just seen American Sniper their thoughts about war.

The film has instantly become the most talked about movie of the year. Some have reacted harshly against American Sniper‘s portrayal of its main character—sniper Chris Kyle, a solider with over 160 confirmed kills—as heroic. On the other hand, the state of Texas proclaimed this Monday Chris Kyle Day in the Lone Star State.

The controversy has made for stellar box office receipts. American Sniper recently surpassed Saving Private Ryan as the highest grossing war movie of all time.

Kokesh, a Marine Corps veteran who became a staunchly anti-war libertarian after leaving military service, started by asking people their opinions of the movie, but then gradually pushed them to a point of view that war is inherently tragic, glorification of it only serves to breed further conflict, and what may look like ideologically-driven terrorism from American eyes looks a lot more like nationalistic self-defense when viewed from the perspective of everyday Iraqis.

“Would you say Chris Kyle is a hero for defending the homeland?” Kokesh asks people exiting the movie. “Do you think that defending your homeland and risking your life to do that makes you a hero.”

“What it means to be a hero is protecting others and keeping them out of harms way,” replied one woman.

“Protecting anyone who you think is family, I guess,” she shrugged.

“Defending their homeland?” she answered.

“Are you saying that insurgents in Iraq are the heroes?” he retorts.

Most of the nearly half hour-long video goes about like that. Another portion of the video shows Kokesh walking a viewer through the movie’s opening scene, in which Kyle, played by actor Bradley Cooper, kills a mother and her son as they were in the process of throwing a grenade at a squadron of American soldiers. Kokesh notes that the Iraqi city square where the scene is set looks like it has been laid to waste by American bombs.

“Doesn’t that mean that the mother and her kids were defending their city against a foreign invader? Like someone who was coming in? Doesn’t that make them the heroes?” Kokesh asks.

Kokesh’s criticism is interesting because it’s significantly broader than most of the attacks that have been leveled at director Clint Eastwood‘s Oscar-nominated film. The vast majority of the issues many people have with the movie is that it glorifies and humanizes a man who was deeply problematic—someone who seemed to have little empathy for the people in his crosshairs and bragged about picking off African-American “looters” in New Orleans in the immediately aftermath of Hurricane Katrina.

Kokesh’s target is something far bigger.

While arguing over whether or not Kyle, who was murdered by another veteran in 2013, was a hero based on his actions is one thing; questioning the heroism of his overall mission in Iraq is entirely another.

Kokesh wants to convince his interview subjects that movies showing individual soldiers as heroes—even complicated ones, like how American Sniper presented Kyle—paint a picture where the ultimate goals of the U.S. military are, by their very definition, noble and unquestioned. Kokesh’s argument seems to be that, because both the intentions behind, and high-level execution of, the war in Iraq were deeply problematic, movies like American Sniper read like propaganda pushing in favor of more destructive, needless wars that go largely unexamined by the public until it’s too late.

“Do you think a movie like this, and its impact on you, is going to make it more likely to support Obama‘s proposed plan to send ground troops back into Iraq to finish the job that we did earlier in that country,” Kokesh asked one relatively young male moviegoer, referencing the section of the president’s 2015 State of the Union address where the Commander in Chief called on Congress to approve a new authorization of the use of military force in Iraq.

“I think it would,” the moviegoer responded, “because ISIS is really get out of hand right now and that movie really portrays things that need to be taken care of in a really heavy way.”

Everyone Kokesh talked to said the movie made them more likely to support increased military action against the Islamic State (another name for ISIS).

Kokesh’s tactics in the video, at times, seem like bullying. Here he is, someone clearly gifted at rhetoric and armed with an in-depth knowledge of recent military history, quizzing random people just coming out of movie about the moral implications of American foreign policy. American Sniper may have become a political touchstone, but it’s also an action flick that’s full of explosions—people likely aren’t walking out of it prepared for grilling worthy of cable news.

What largely saves the endeavor in the end is that the goal is less about going the Jimmy Kimmel route by pointing and laughing at people’s unexamined or uninformed beliefs, but rather sincerely getting people to analyze those beliefs and shed them where they don’t entirely fit together.

Kokesh’s enemy here is the federal government, which he has in the past called for the “orderly dissolution” of and repeatedly labels a “criminal enterprise.” At the end of the day, Kokesh’s politics are certainly radical, but his message in this particular case is one worthy of consideration.

Never once in the video does Kokesh talk about Kyle as a person or the morality of his individual actions. That stuff is secondary. Similarly, some of the people interviewed  thank Kokesh for his service and call him a hero, but he repeatedly pushes back against that label—especially when its applied categorically to anyone who served in the armed forces. It’s not that those people didn’t exhibit acts of bravery, something Kokesh himself notes that Kyle did repeatedly, but that blanket praise hides more fundamental questions about U.S. foreign policy toward the Middle East.

The fight over whether or not Kyle was a hero is something that’s been politicized and now is just another piece of ammunition between the liberals and conservatives. Kokesh is worried about something much deeper when he says, “I think the concept of holding someone up as hero is dangerous.”