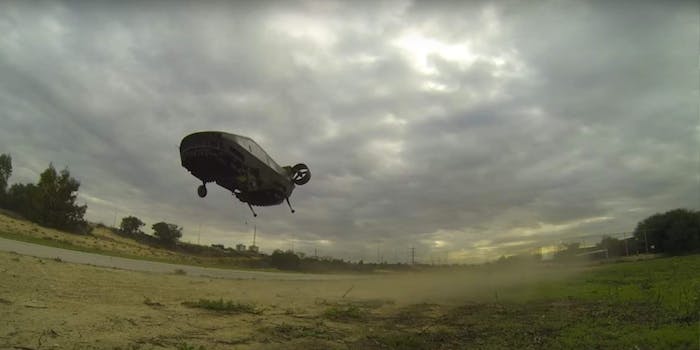 This ambulance drone can carry two people out of dangerous situations

When it comes to military conflicts, drones are best known for killing. But the AirMule is built for saving lives, and it recently completed its first successful flight.

The autonomous vehicle, built by the Israeli company Tactical Robotics, serves as an airborne ambulance. The unmanned craft, which can take off and land vertically, can travel to terrain unsafe for human rescue personnel—like a battlefield.

The AirMule is designed to carry two people at a time and can lift nearly 1,000 pounds and travel over 30 miles. A single engine powers the drone, and the rotors are entirely internal. Its design presents opportunities for emergency rescue craft and cargo-carrying vehicles.

The AirMule test run occurred at a facility in Megiddo, Israel, after the Israeli Civil Aviation Authority cleared the company for unmanned flight. Future tests, including demonstrations of its cargo-carrying capacity and beyond-line-of-sight flights, are planned for later in 2016.

Thanks to its internal rotors, the AirMule is capable of traversing areas unreachable by emergency vehicles and helicopters. Because of this design, the drone can get closer to structures and navigate tight confines.

Tactical Robots isn’t the only company getting into the person-carrying drone business. At CES 2016, Chinese firm EHang debuted the EHang 184, a single-person autonomous passenger drone. It’s capable of remaining airborne for 23 minutes and achieving speeds of up to 60 miles per hour.