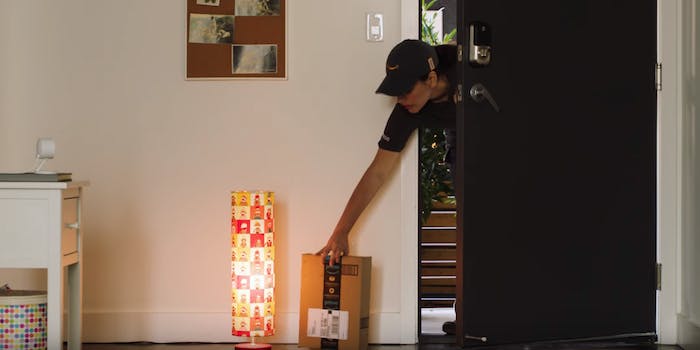 Amazon Key is getting destroyed on social media

The service will be available in select cities on Nov. 8.

Amazon unveiled a new service today that will let its couriers deliver boxes inside your home when you’re not around. If you think that sounds like a bad idea, you’re not the only one.

The company’s new service is called Amazon Key, and it’s essentially a high-tech alternative to leaving a key under your mat.

Here’s how it works: First, customers will need to purchase special equipment before they can enroll in the service, including a compatible smart lock, security camera, and the Key app (Amazon is currently selling $250 bundles).

Prime customers will then select “Amazon Key” delivery at checkout. Note, only Prime-eligible items can be delivered in-home. Like Prime Now, buyers will get a four-hour window for when their package will arrive and will receive a notification once it’s getting close.

The shipping courier will first knock before attempting to open the door. Once it’s established nobody is home, the delivery worker will remotely open the door using the smart lock app and slide the package inside. Amazon emphasizes that its workers are not allowed to enter a home. If you’re not convinced, you can watch the entire process on your phone using Amazon’s Cloud Cam. Amazon says you should avoid using the service if you have pets that could escape through the front door.

Key is designed to reduce lost orders and theft that may occur when boxes are left on someone’s doorstep. As CNET points out, 31 percent of people have experienced package theft, according to a survey from Shorr Packaging.

But losing a box every now and then doesn’t compare to the obvious risk of giving your house keys to a complete stranger. People are taking to Twitter to let Amazon know how they feel about Key, expressing a mix of disbelief, anger, and worry.

The new season of Dateline is brought to you by Amazon Key – bringing stalkers and victims together in a hip new way.

New service Amazon Key that allows couriers to open your front door to drop off packages. Sounds good to me. $AMZN pic.twitter.com/TyH52FBXsX

Just learned about Amazon Key and this was the first thing I thought about pic.twitter.com/ki8h8Q1jtk

Amazon Key is good news for me, the incredibly lazy serial killer

Many already claim they won’t use the service.

Others think the shortsighted solution was designed by and for men and disregards recent sexual harassment conversations sparked by high-profile allegations.

Amazon Key will be available for Prime members at no extra charge (aside from the tech you’ll need to buy) on Nov. 8 in 37 U.S. metro areas.