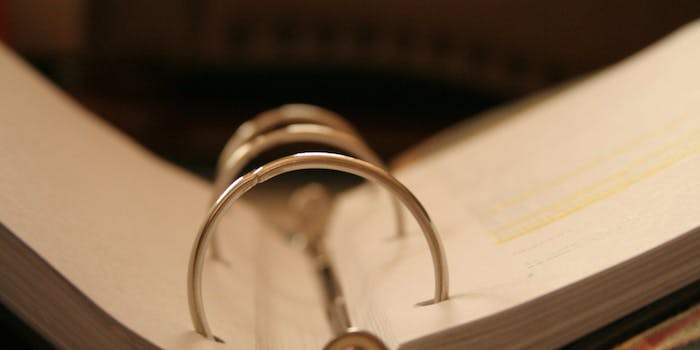 One blunder from a presidential nominee has transformed binders from humble paper holders to the newest symbol of the women’s rights movement.

Republican presidential nominee Mitt Romney’s comment on “binders full of women” during a question on equal pay for women caught like wildfire during Tuesday night’s debate and inspired thousands of tweets and multiple memes, parody accounts and blogs. Even the GOP got in on the action and posted their take to Facebook on Wednesday.

If you’re looking for a souvenir of the debacle, some clever Amazon reviewers are here to help you choose the right one.

Men and women alike have gone to the reviews section for binders sold on Amazon.com since Tuesday’s debate and overtaken comments on the quality and durability of a binder with sarcasm and wit.

If you were actually in the market for a binder, you’ll have to leap to page 27 just to find a review for the Avery Durable View 2-inch Binder about the binder itself. The majority of the comments posted more recently involve mocking Romney’s comment.

“Maybe it’s just my women, but they don’t seem to want to fit into the space I’ve designated for them in this binder,” Sabriel wrote in her scathing review. “They keep sticking out over the edges, even getting away in some cases. I thought using clear, glass-ceiling page protectors would help, but it doesn’t seem to slow them down anymore.”

Sabriel’s two-star review, titled “Not as useful as the Trap Her, Keep Her,” is currently the most helpful critical review on the Avery two-inch binder, which more than 1,800 people found useful.

The comments are a plethora of women in the kitchen jokes—a nod to Romney’s comment on making hours flexible for a female cabinet member who wanted to be with her children—and scathing comments on equal pay. One reviewer compared being in a binder to being available to perform every whim for her husband in one easy-to-organize location.

Some reviewers took the obvious approach: most of the binders sold on Amazon are just too small to hold women inside them.

“As an intern on the Romney 2012 election campaign, I was tasked with procuring binders for Governor Romney,” daveyclayton wrote on a review for a one-inch binder. “While these binders are well made, attractive and reasonably priced, and while I’m sure they would make an excellent choice for those wishing to store written or printed documentation in a secure and easily accessible manner, they are unfortunately too small to put women in.”

This is not the first time many have found humor and satire in a product review. Women turned on the snark when Bic released a set of pens “for her” in August and others took their frustration out on pepper spray after Fox News anchor Megyn Kelly called it “a food product, essentially,” last year.