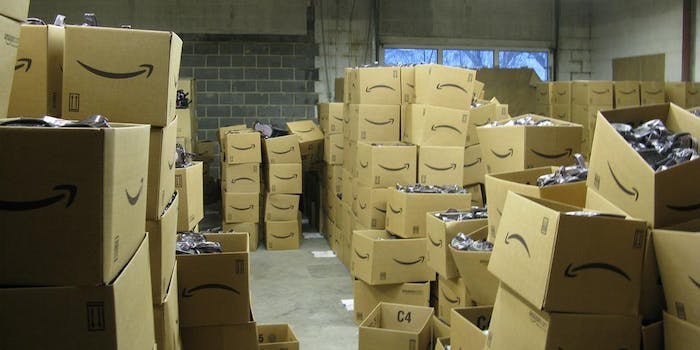 Amazon is opening a brick-and-mortar location for holiday shopping

This holiday season, Amazon is doing something a little different. Which is to say: something very much the same. In a wild departure from its strategy of wild departures, the online retail behemoth will open its gaping maw IRL at 7 West 34th St. in Manhattan.

The Wall Street Journal reports that Amazon’s retail store is set to open in time for seasonal shopping insanity, will handle product returns, exchanges, pickup of online orders, and some same-day delivery shipments. Shopping online does away with the discomfort of leaving one’s house altogether, but it can create uncomfortable real world run-ins when one needs to swap for a different animal print pair of jeggings, say.

Rumors of a brick-and-mortar Amazon store have circulated since way back in 2012, when Amazon CEO Jeff Bezos didn’t sound opposed to the idea. The company eyed locations in Seattle before abandoning the idea. In 2013, kiosks popped up selling the Kindle family of devices, and the company has expanded its Amazon Locker program, which lets customers ship their packages to designated local stations accessible by code.

Amazon is known for ruthlessly undercutting the competition, pissing off the publishing industry with its ebook policies, and generally rerouting any existing product through virtual space via vast warehouses with questionable business practices. With a physical presence, the spectre of the online mega-retailer will take corporeal form for the first time. Anything could happen.