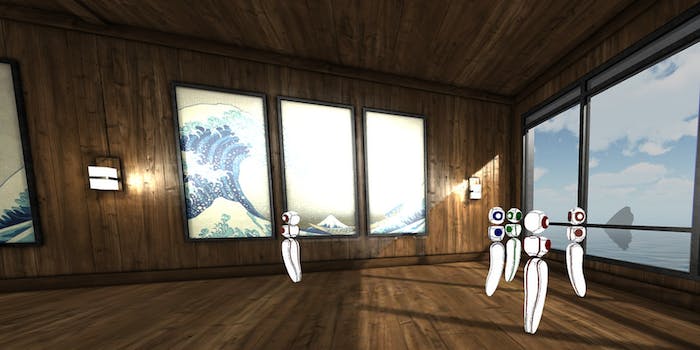 Red pill? Or is it the blue one?

Today, I laughed in virtual reality for the first time.

It wasn’t even a good joke—some throwaway jab about the Taylor Swift video that was playing on the VR equivalent of a drive-in movie theater screen—but that didn’t matter. A glossy, glowing, limbless robot avatar named JohnMossey laughed with me. It felt like telling a joke in a foreign language. The point at which your language comprehension tips over into something else and the thing that was unnatural becomes fluid. That’s what laughing in VR felt like. 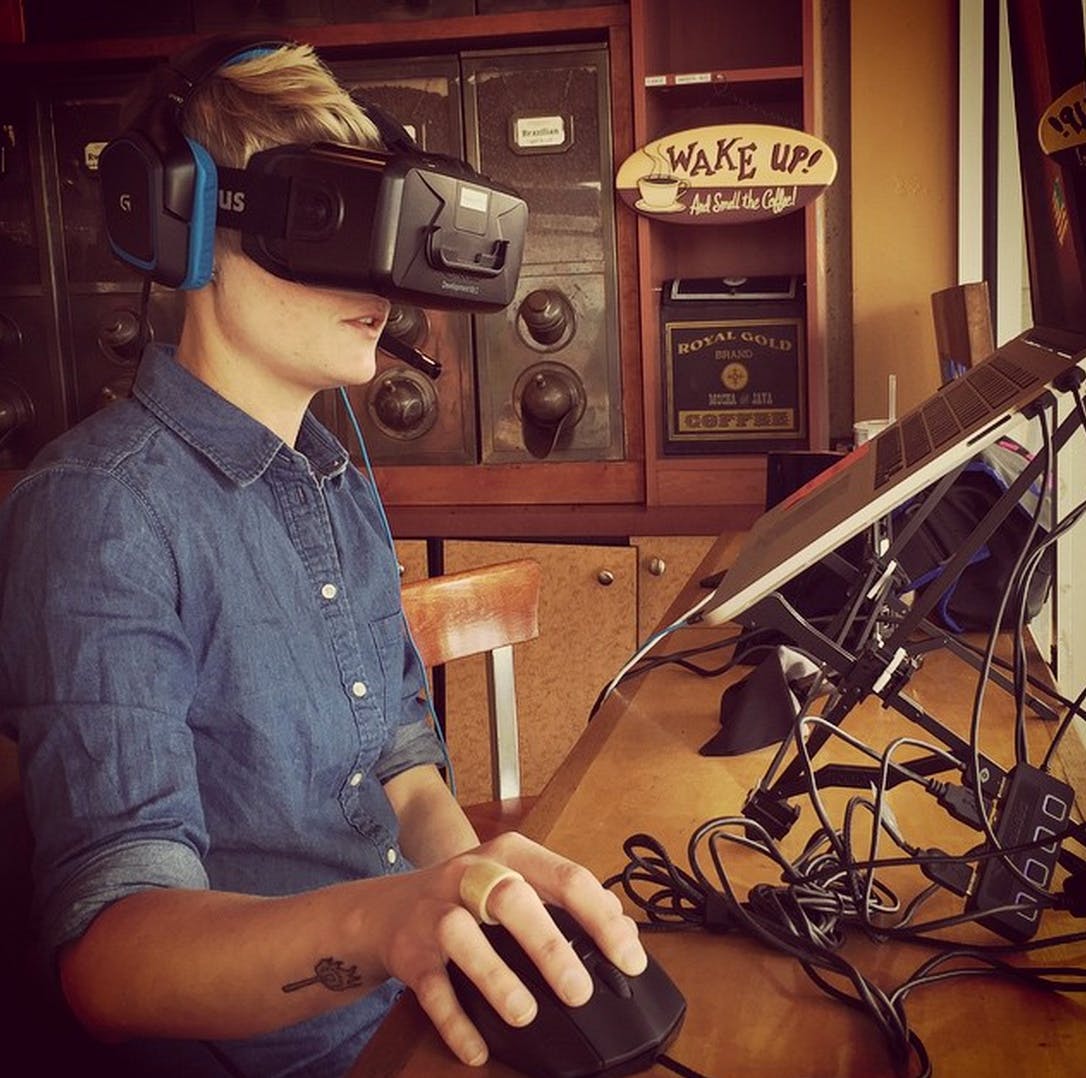 I spend way more time thinking about the future of VR than I spend strapped into the sensory feeding trough of an Oculus. Gaming and high-end simulations (like virtually ascending the Wall from Game of Thrones) are cool, but they aren’t what the big deal is. VR is much, much bigger than video games; a 3D virtual world will follow smartphones, and now “wearables,” as the next platform. Those devices are interruptive in nature, pinging up with chirps and blips, VR is immersive—making it a very different beast.

If our attention spans are usually divvied up into innumerable split-second morsels (likes, favs, RTs), VR by definition commands our full attention. The thing is, I’m usually not willing to hang out in a virtual space for long. I like to get the gist of it and get out of there. This time, I didn’t want to leave. And that’s equal parts terrifying and totally awesome.

One company has a very different vision than the gamer broverse that VR can bring to mind. AltspaceVR isn’t worried about building a metaverse for the time being; it just wants to create a thoughtful, artfully rendered communication platform where people actually want to hang out. “At some point theres probably going to be a VR operating system,” Wooden says, trailing off a little.

“[VR] is a new medium; it’s not an accessory,” he says. Facebook bought the world’s best-known VR company and yet we’re still talking about gaming VR—not social VR. If Altspace’s $5.2 million in funding from sources like Google Ventures, Tencent, and Dolby is any indication, that conversation is right around the corner.

“In VR, there’s a lot of non-verbal communication that facilitates that connection,” “Cymatic” Bruce Wooden, Altspace VR’s head of developer relations, explains. Unlike a third-person video game, or even a first-person role-playing game, in VR “You feel more attached to your avatar because you are inhabiting it.”

Looking down, you see you.

Down the rabbit hole

Wooden was kind enough to drive down from Redwood City to meet me in a coffee shop in Santa Cruz. After securing a power strip, we chatted a little about his company before he eagerly started unloading the contents of the black backpack he carried. He was carrying around a whole virtual world, but unpacked it just looked like a Macbook Pro, a laptop stand, a Verizon MiFi, an Oculus DK2, and a pretty standard gaming mouse and headset. He smiled, casually popping the headset on like a diver might a mask, and seemed to say hi to someone.

I didn’t really get it. Then he handed it to me.

I tentatively walked around what felt, really felt, like a persistent, boundless environment.

Far from the jarring ready-set-go! of most VR experiences I’ve had, I looked around and found myself in a large, modern chamber with stone and wood paneling, with a virtually rendered print of a Japanese woodblock painting running down the wall to my right. Immediately I forgot about Bruce and the coffee shop I was in. There was someone else in the virtual room talking to me. A Wall-E-inspired, glossy, benevolent-looking robot was talking to me. Turns out I was speaking in realtime with John Mossey, AltspaceVR’s intern in Atlanta.

John didn’t have arms or legs (those look weird rendered virtually, he tells me) but was a floating white humanoid that gently glowed blue as he talked. He showed me around the space, which was decorated with sofas, a large TV-like screen, and a big potted cactus that I accidentally teleported onto a time or two before I got the hang of moving around. To move around, I clicked the left mouse button and sort of warped to wherever I’d picked, though it was fluid and not at all disorienting.

In Altspace, much like in regular space, noises grew louder or softer as you moved toward or away from them. If John was across the room, he’d yell for me to hear him if I didn’t move my own first-person view avatar closer. Turning right or left, the sound grew muffled, just like it would in real life. 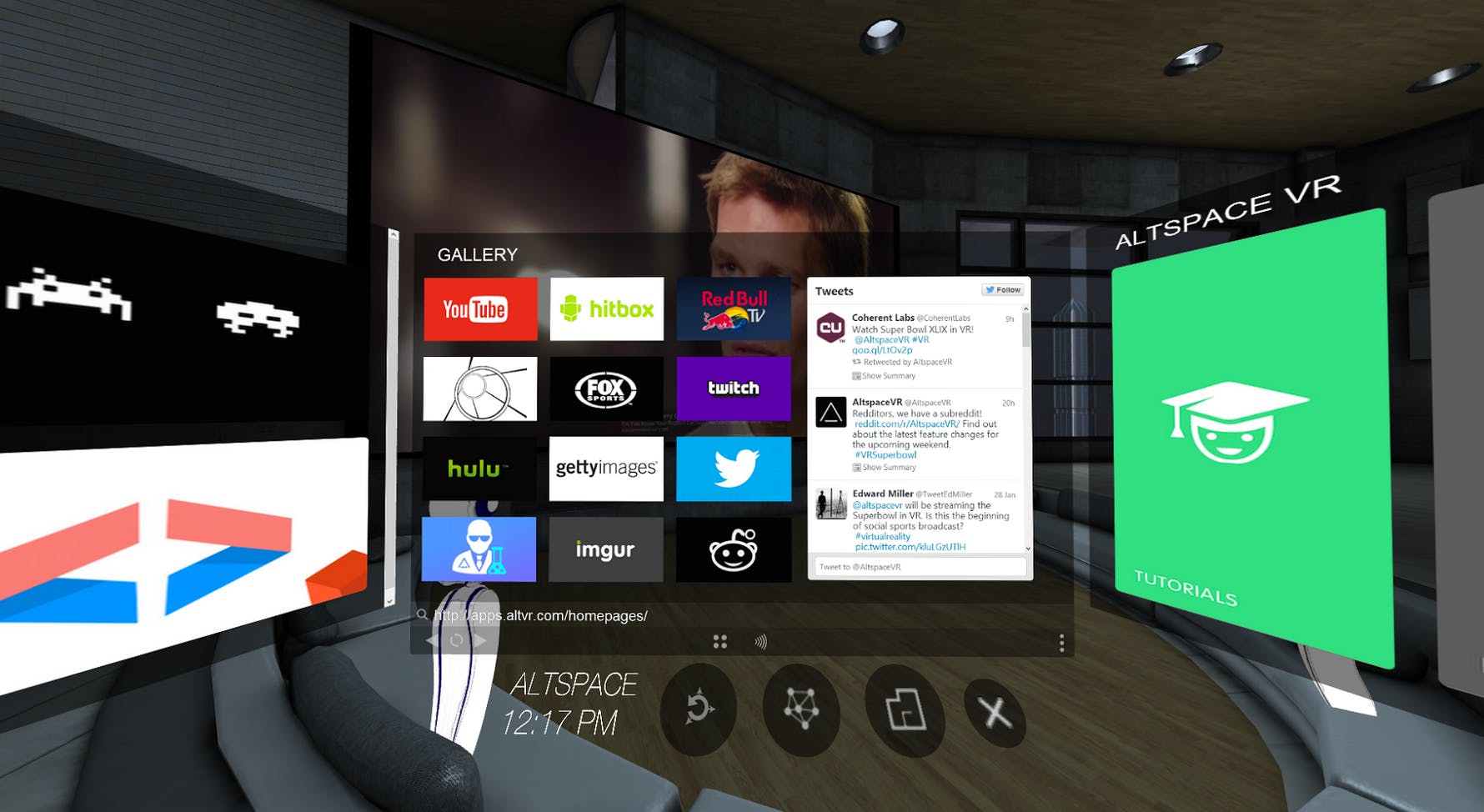 A crude 2D render of the Altspace UI

Unlike real life, right-clicking pulled up a small four button menu near my virtual feet. Here I could pull up the browser (we’ll get to that), switch virtual open settings called “spaces” (sort of like servers in a multiplayer video game), or check to see what friends were online. Choosing the browser brought up a triptych of displays, all translucent and displayed with perfect clarity over my field of vision in the wood-paneled room.

A fairly traditional tiled sort of UI lay in the middle, much like a Roku, with options to open YouTube, Twitch, Hulu, and a handful of other in-world “apps.” I opened one, a virtual game within a virtual world, displayed on the translucent 2D display which overlayed my 3D surroundings—in this case, a window with a beautiful, foggy island mountain in the distance, far outside beyond a wall of windows.

John suggested that we get a (new) room, so we hopped over to a larger environment. Suddenly we were outside on a stone deck of some kind, a misty sea around us. Another humanoid robot sprung to life, glowing red. We had just been joined by Debby Shepard, an AltspaceVR product manager beaming in from Redwood City.

I rotated to take in the change of scene as Debby explained that subdued colors translate best to VR worlds like this one. The environment, the entirety of my sensory world, felt big and open and weirdly relaxing. I tentatively walked around what felt, really felt, like a persistent, boundless environment. “We can explore up there,” Shepard suggested. With the teleportation thing down, I bolted up the stairs into something that looked like an open air art gallery. I took in the scenery and exited a staircase on the other side. I explored on my own for a minute and then teleported next to John so I could hear what he and Debbie were talking about.

The big island mountain was still there in the distance, but closer now, and we stood at sea level. I mentioned that it looked a lot like Ha Long Bay in Vietnam. John didn’t know what I was talking about, but Debbie mentioned that she hadn’t visited and I said that I’d always wanted to. We were just talking about normal stuff, not like on the phone, but like we were in person. With some very limited gestures and basic, subtle body language, I felt about a hundred times less awkward than I would on a conference call. Once or twice I wondered what Bruce, still sitting next to me in non-virtual life, was up to before forgetting about him altogether.

To my left, there was something that looked like a reflecting pool or maybe a hot tub. Hovering out above the water was a big screen, sort of IMAX-sized. This was a space for a larger gathering, the robot duo explained, “like a party.” We were standing next to the reflecting pool. I closed the translucent menu and a virtual solar system had unfolded out of the pool. As it orbited slowly, I walked around, examining the sun, Saturn, the Earth. This was powered by webGL, they explained. It could model just about anything, but one use case would be shopping: Imagine looking at a camera on Amazon and then being able to conjure it in three dimensions, examining and even shooting with it before placing your order.

I marveled at the planets and they drifted around the reflective pool. I thought I could hear the ocean, and well, I guess I could.

This was a space for a larger gathering, the robot duo explained, “like a party.”

After letting the planets soak in, Debby threw a Jimmy Fallon clip from YouTube onto the big screen above the water. Moving closer toward the edge of the deck, the video, a crystal clear interview with Christina Aguilera, grew too loud—like standing right next to your TV. John and Debbie talked behind me, but their conversation was muffled until I moved back to join them. I opened my menu again and hijacked the broadcast, Chromecast-style, choosing a Taylor Swift YouTube music video. I apologized for the abrupt T-Swift and we all laughed. John suggested that people could get together and watch something like the House of Cards premiere. They’d had an open beta weekend event for viewing the Super Bowl; people watched a big screen, mingling around in groups and peeling off for private conversations.

Hanging out in another reality

I opened my menu again, letting it soak in that I was looking at a YouTube menu, translucently draped over a huge virtual movie screen that blocked my view of the Myst-like virtual island chain in the distance. More than a hour had passed. (Sorry, Bruce.)

Everything was fluid and seamless. Without the high bar of hyperrealism, Altspace could shoot for 75 frames per second, totally possible on a consumer laptop. A high end PC rig wasn’t necessary, but that didn’t make the graphics feel any less real. If anything, they were pleasantly stylized.

The third environment we warped to was more of an office space, if Bruce Wayne had an eye for industrial design. I laughed, virtually, about a very modern-looking fireplace. “I guess you’ve really arrived when you’re on the 80th floor of a virtual building and your fireplace is shaped like a rhombus,” I quipped. John laughed (or humored me).

We turned toward a low staircase leading up into a smaller meeting room with a modern looking orb statuette on a desk. We descended again, onto a walkway leading to a patio that felt so high up it was actually in the clouds. After clicking my way too close to the edge of the balcony and getting a very real swell of fear at the heights, I carefully kept my back to the wall of windows.

“It sounds cheesy, but sometimes I come here and just sort of let out a sigh of relief,” John tells me, his virtual head cocked to the side thoughtfully, the mountain range behind him. And he was right. This was the opposite of a virtual first person shooter. It was serene and vast. I didn’t want to leave.

But of course, I had to. Suddenly aware of how much time had passed, I pulled my headset off. Unlike most of my past VR demo sessions, I felt fine, if wistful. No sim sickness, no headache.

I thought about the foggy bay and the tall, misty island. I was smiling.