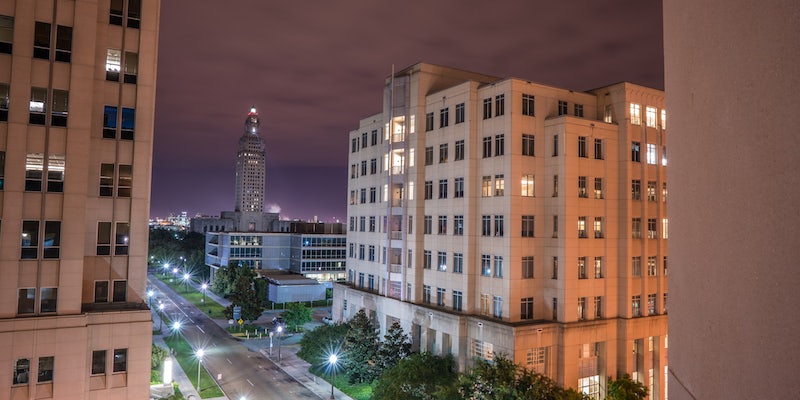 There are multiple videos of the shooting that have not been released.

The U.S. Justice Department has been called upon to investigate the police shooting of a black man whose death outside of a Louisiana convenience store was captured in a graphic bystander video.

At the time of publication, the Justice Department had not commented further on its involvement.

Video of Sterling’s death recording by witnesses in a nearby car show two police officers pinning the father of five to the ground outside the Triple S Food Mart in Baton Rouge. While Sterling is on the ground and both officers appear to be restraining him, someone is heard shouting: “He’s got a gun.” One of the officers then apparently draws his sidearm before two shots can be heard, followed by screaming and an additional three shots.

According to the East Baton Rouge Coroner’s report, Sterling died from multiple gunshot wounds to the chest and back. News of his death and the video of it went viral overnight, immediately sparking protests in the streets of Baton Rouge. The two officers involved in the shooting, identified as Blane Salamoni and Howie Lake II, have been placed on administrative leave.

According to the Baton Rouge Police Department, the officers responded to an anonymous call shortly after midnight Tuesday about a black male allegedly threatening the caller with a gun. The convenience store owner, Abdullah Muflahi, told reporters that Sterling did not have a gun in his hand. However, one of the officers allegedly removed a gun from Sterling’s pocket after the shooting occurred.

Muflahi said he witnessed the officers using a stun gun on Sterling prior to the shooting.

Police say there are multiple videos of the incident which are being reviewed by investigators and, as of yet, have not been released to the public. The additional footage likely includes the convenience store’s surveillance camera in addition to video from one of the police officer’s body cameras, though the device was reportedly dislodged in the altercation.

“The cause of justice requires state and local law enforcement to join in this request as soon as possible.”

Edwards said Wednesday the Federal Bureau of Investigation and state police will be involved in the investigation. Mayor Melvin Holden emphasized the importance of an independent investigation, but he drew the scorn of local activists by remarking, “It’s not like we need to be hand-held and spoon-fed when it comes to doing what’s right.”

Democratic Rep. Cedric Richmond of Louisiana said there are “unanswered questions” surrounding Sterling’s death and underscored the need for federal involvement in a statement on Tuesday. Richmond raised concerns regarding “the initial calls for police presence, the level of force used by officers, the verbal and physical altercation, and the response of the officers after he was shot,” while calling on the Justice Department to conduct a full and transparent investigation.

“The cause of justice requires state and local law enforcement to join in this request as soon as possible,” Richmond concluded.