It’s allergy season, and these apps want to help you survive it

For most people, spring is a time of celebration and rebirth. For hay fever sufferers, it's hell.

It’s that time of year again: allergy season, meaning that between the months of April and August, approximately 7.8 percent of Americans will suffer from the effects of hay fever. If you are one of that 7.8 percent, you are probably absolutely repulsive to be around. Your eyes are probably chronically red, swollen, and beady, like that of an albino sewer rat. Your nose has started producing more fluid than the Trevi Fountain, and you’re likely unable to clear your throat on the subway without turning into a mucus lawn sprinkler and sending at least five people running in the opposite direction.

There are ways to alleviate the symptoms of allergies, and for most people it involves dosing themselves up with antihistamines and avoiding outdoor activities like the plague. But maybe you’re tired of missing out on office picnic retreats. Maybe you’re tired of nodding out like a heroin addict during business meetings because the CVS ran out of non-drowsy Claritin. Maybe you actually want to live your life like a normal person, rather than an anthropomorphized snot fountain.

Fortunately, there might be hope in the form of a slew of allergy and pollen-forecasting apps, which claim to be able to provide relief for hay fever sufferers. As one of the 7.8 percent of allergy sufferers in the U.S., I decided to try a few of them out.

Available for the iPhone, this app is just as tailored to hypochondriacs as its parent website: It lets you obsessively track “personalized allergy forecasts based on your allergies and locations” after you create a profile of your symptoms, triggers, and your zip code.

The app then pulls up the weather forecast (because your symptoms are likely to be aggravated on “hot and windy” days, rather than “cold and wet” ones), as well as the forecast for your individual triggers and the “fun allergy fact” of the day. Did you know allergies are worst in early spring?!?!! Yeah?!?! SO DID I. 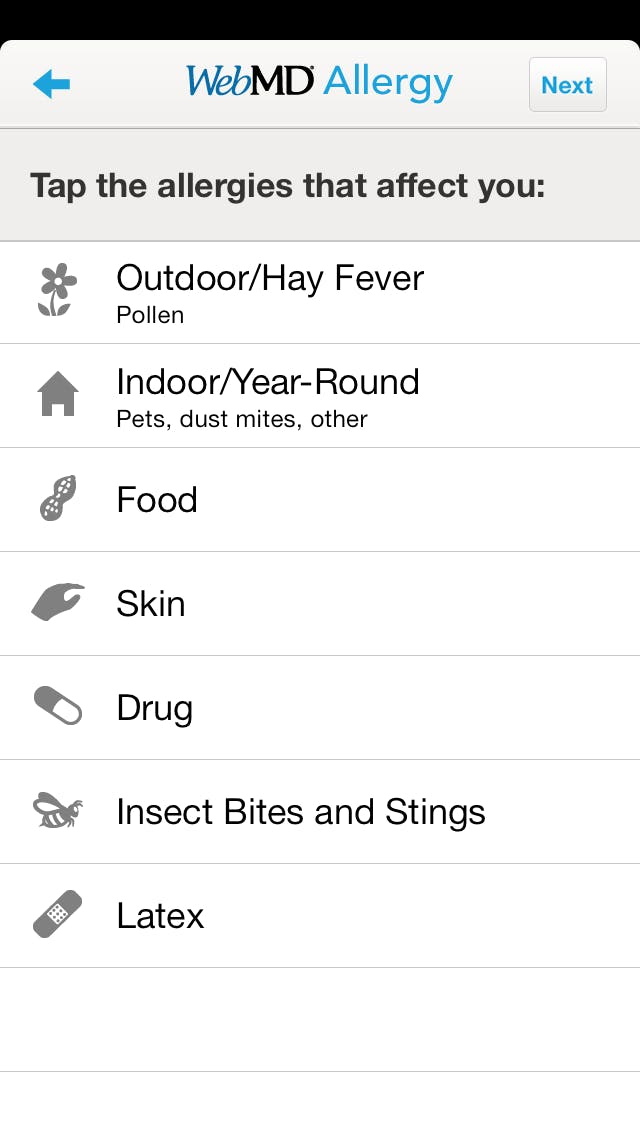 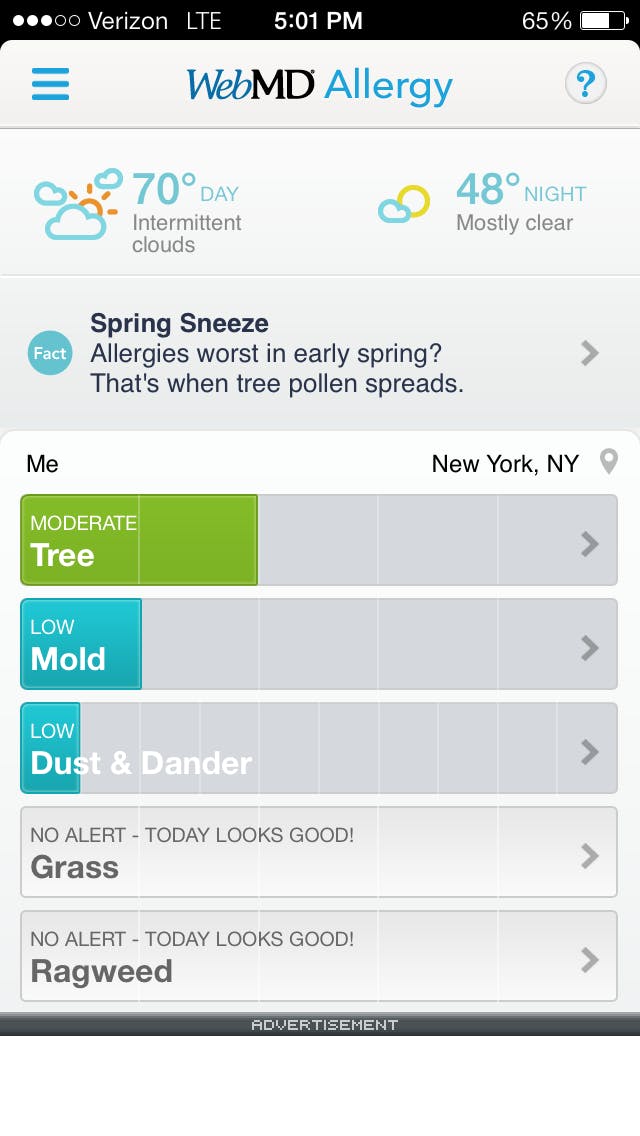 The app also includes an “allergy tracker,” which lets you track your symptoms and treatments and “generate a report you can share” on social media, which is possibly the best tactic for getting people to unfollow you that I can think of. 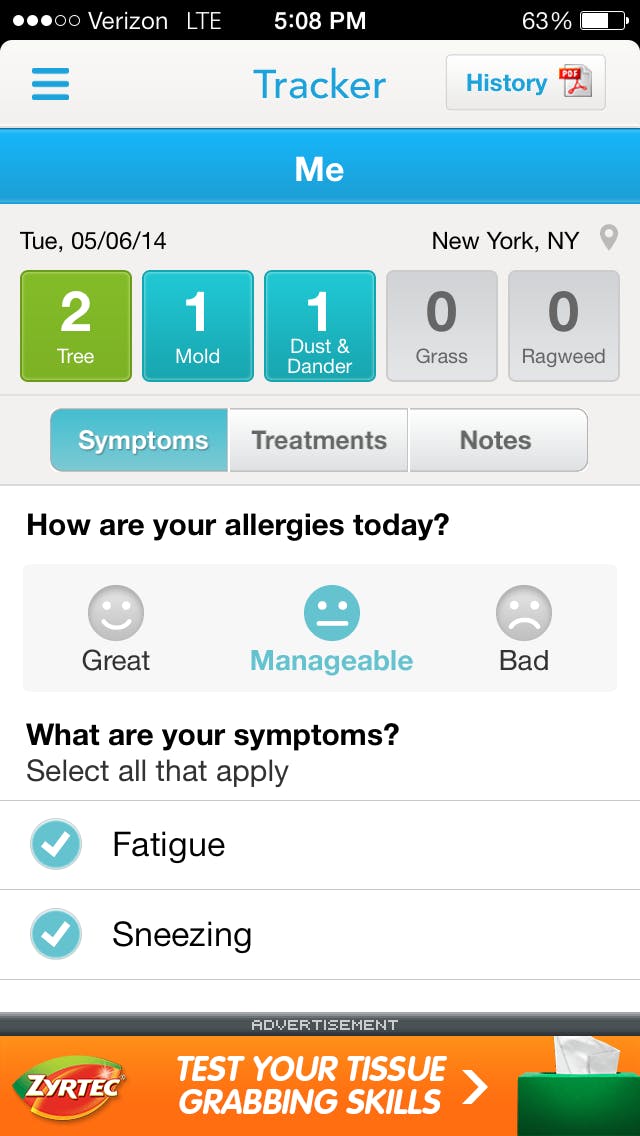 There’s also a handy-dandy list of tips on avoiding spring allergy triggers inside and outside, such as cutting back on carpeting and “wearing an allergy mask” both indoors and outdoors, which will probably not only keep the pollen at bay, but any potential sexual partners as well.

AllergyMgr for iOS is basically just product placement for Omnaris™, an anti-allergy nasal spray whose list of possible side effects includes “adrenal insufficiency,” “slow and delayed growth in children,” and “thrush,” or a yeast infection in your mouth, which is officially the second grossest thing that can happen to the human body next to an ingrown hair on your taint. (You should totally Google Image search both of those things right now).

As yucky as Omaris™’s potential side effects are, however, the companion app is positively gorgeous! Look at all that purple! That’s a… that’s a purpley-purple app, right there. 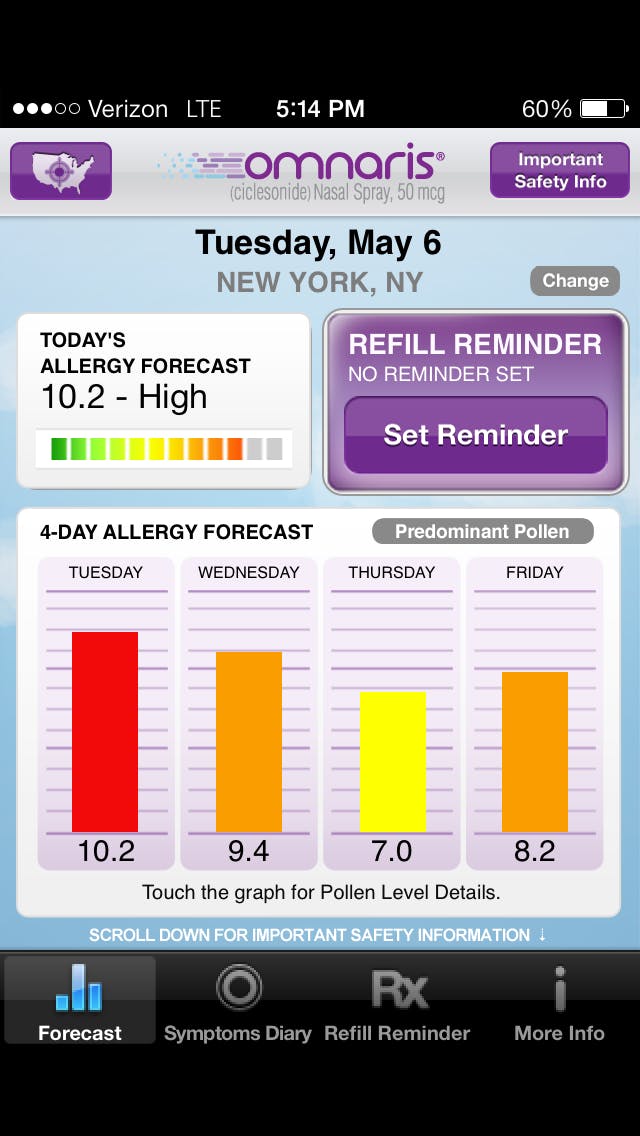 In addition to more detailed allergy forecasts and pollen level graphs, AllergyMgr also has a “refill reminder” feature, which notifies you when you have to refill your Omnaris™  allergy medication, as well as a “symptoms diary” and a map of allergy forecasts throughout the United States, in the event that you’re taking a trip to L.A. next week and want to know how much Omnaris™ to pack. (Or in the event that you’re a terrible, boring person with a passion for tracking pollen forecasts throughout the Southwest, either one). 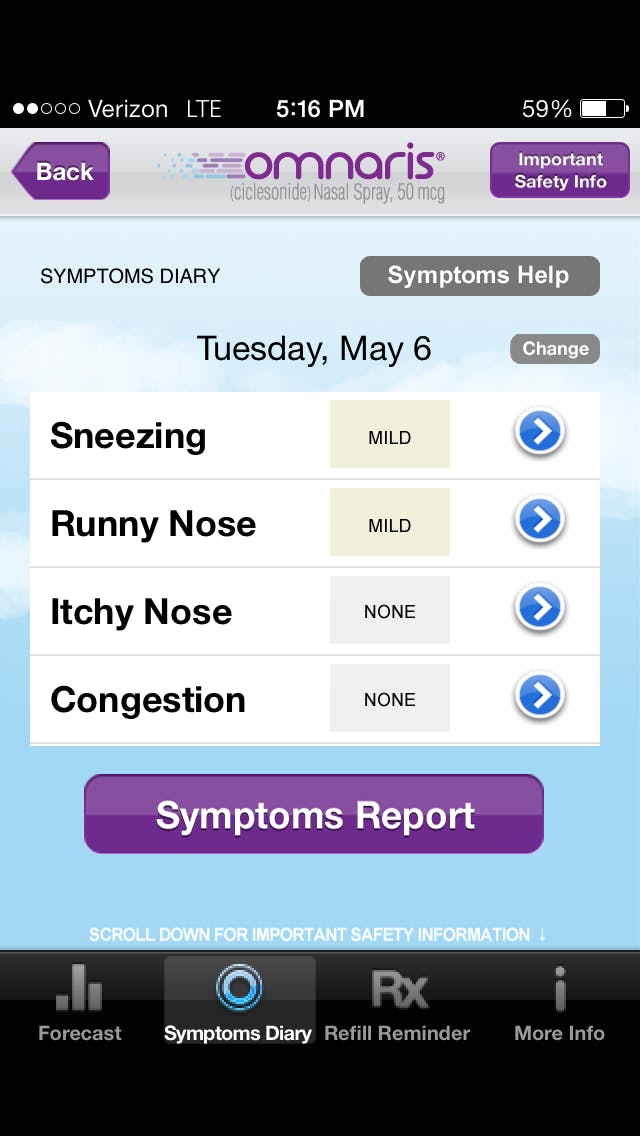 Zytrec AllergyCast for iPhone and Android is the companion app for Zyrtec, the anti-allergy medication which most allergy sufferers know as the one that makes you walk around all day like a drunk baby. Its app produces a similarly intoxicating effect, with pictures of cartoon puppies, ducks, bunnies, and kitties frolicking around in the grass. 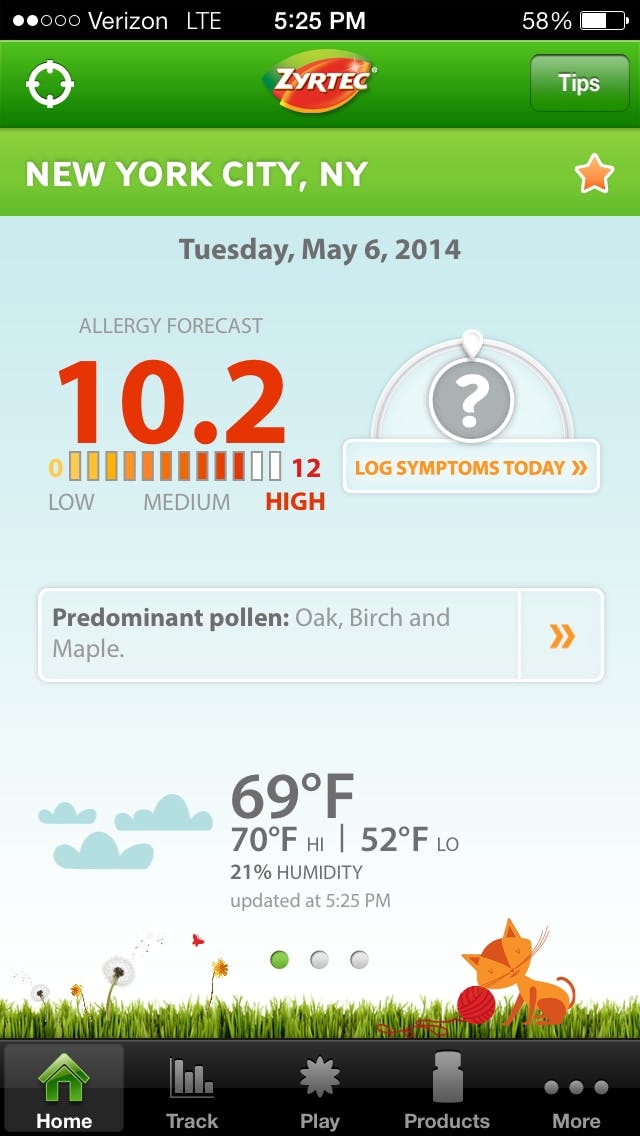 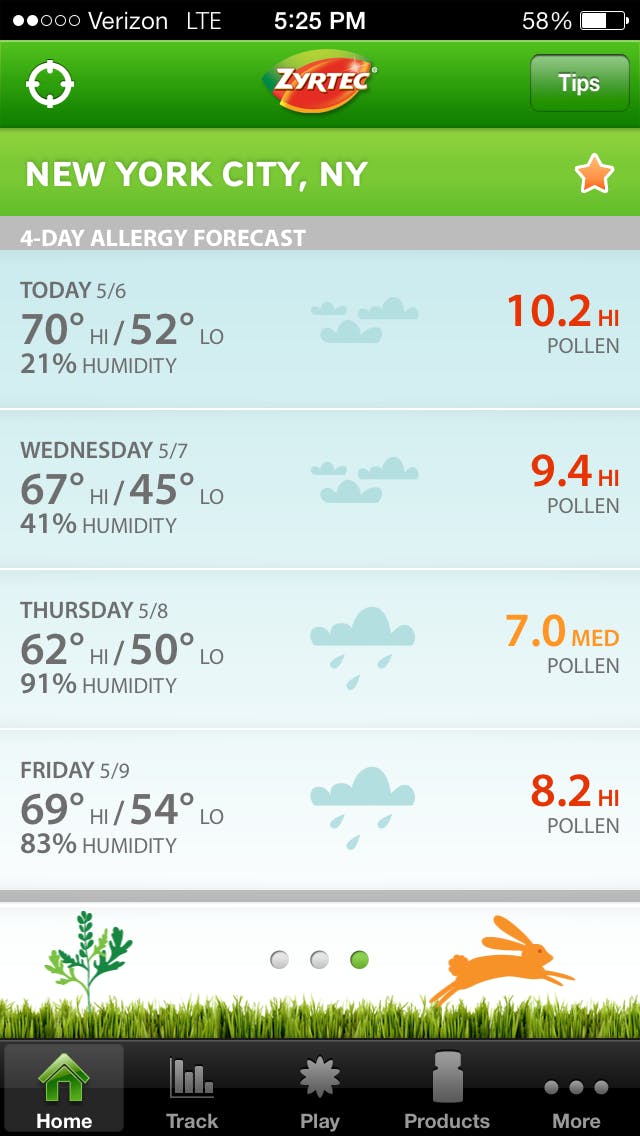 Like the other apps, Zyrtec AllergyCast allows you to log your own symptoms and rank them from “ugh” to “great,” as well as a four-day pollen and weather forecast and a helpful list of “tips” (“don’t hang clothing or linens outdoors to dry”! “Install HEPA pollen filters at home and in your car!”). Also like the other apps, it won’t really tell you anything that’ll actually make you feel better, other than to avoid certain zip codes on certain days. Overall, it’s just a big digital pimp for Zyrtec, although to be honest, they might be better off marketing themselves as “Zyrtec: the allergy medication that doesn’t cause yeast infections in your mouth.”

Photo by William Brawley/Flickr (CC BY 2.0)