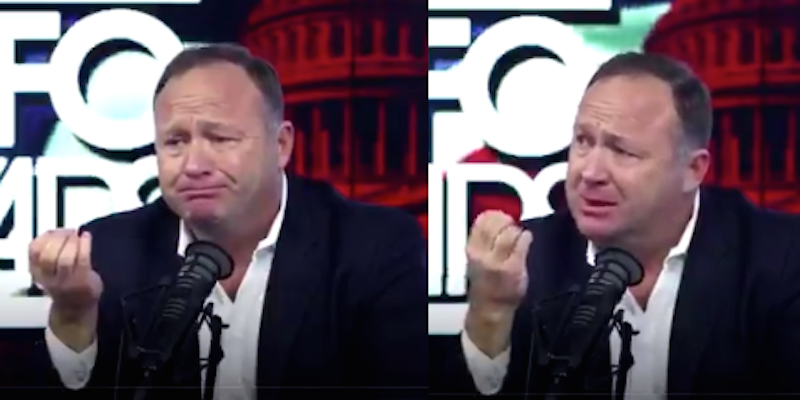 Alex Jones was disturbed by President Donald Trump’s announcement that the U.S. would be joining France and Britain in a coordinated airstrike against Syria on Friday night.

The InfoWars founder hosted an emergency livestream after the controversial news broke Friday evening, and he seemed emotional, at one point breaking out in tears.

Jones seemed particularly disturbed that the president had broken his previously anti-interventionist stance. He likened the situation to his own ex-wife’s custody of their children, choking up as he said: “They said if you just turn against Trump it would be better, but he was doing good, and that’s what makes it so bad … If he had been a piece a crap from the beginning, it wouldn’t be so bad. But we made so many sacrifices. And now he’s crapping all over us; it makes me sick.”

Later in the same stream, Jones declared that the president is “compromised” and yelled about “dirtbag Hillary.”

This just happened too. pic.twitter.com/yymrX1YVqI

Jones, though, isn’t the only Trump supporter to find disappointment in his Syria decision, especially those who believed his America First promise.