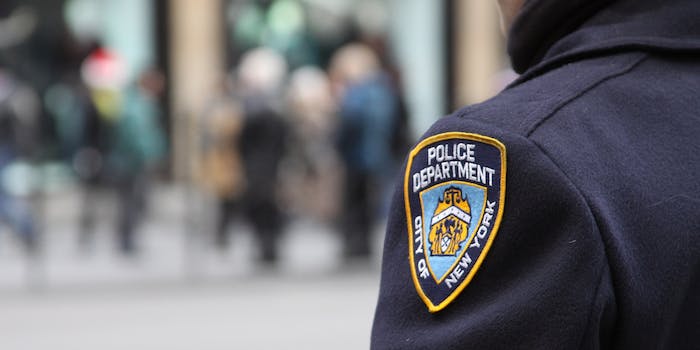 Activists are taking up the cause against police violence once again.

A New York police officer last night shot and killed an unarmed man in what’s been described as “a total innocent” by NYPD Commissioner William Bratton.

The event is being highlighted online by anti-police-violence activists who are comparing the event to the shooting of Mike Brown in Ferguson, Mo., and the choking death of Eric Garner in New York City.

Officer Peter Liang, who has been on the job for less than 18 months, shot 28-year-old  Akai Gurley once in the chest in the staircase of an East New York housing project without issuing a single word of warning. Gurley leaves behind a 2-year-old daughter.

“I shot him accidentally,” Liang told colleagues afterward according to the New York Daily News.

“They didn’t identify themselves,” Melissa Butler, Gurley’s girlfriend who was with him at the time, told media soon after the shooting. “No nothing. They didn’t give no explanation. They just pulled a gun and shot him in the chest.”

Gurley ran three floors down the steps after being shot before he collapsed in a pool of his own blood.

The hashtag #AkaiGurley is being used on Twitter to raise awareness about the late-night killing.

The explanation for Akai Gurley’s death, as offered up by the NYPD today, is crap. We needed more than this. http://t.co/gWMdtC38FW

Eric Garner, Ramarley Graham and Akai Gurley were all murdered by the NYPD yet none of there families will ever experience justice

Akai Gurley was unarmed when fatally shot by a rookie N.Y.P.D. officer in a dark stairwell http://t.co/rDIEJeaStT pic.twitter.com/SFtxwfninY

There is a serious systemic problem that needs to be addressed. People have ignored it for yrs & it keeps happening over&over. #AkaiGurley

This story has been told too many times. #AkaiGurley could have been any black male. It is disgusting and terrifying and heart breaking.

"accidental nature" of the killing of #AkaiGurley is the exact problem. the police system wires in the INSTINCT that black men are violent

ALL the news articles I've seen so far about #AkaiGurley have the police saying, "our bad, rookie cop!" ABOUT AN INNOCENT MAN'S DEATH.

They say the cop was nervous. Black people are nervous every time we pass a cop. But our feelings don't matter. #AkaiGurley

“There’s going to be a full investigation to say the least,” New York City Mayor Bill de Blasio said this morning. “This is a tragic situation—that’s the bottom line. This is a tragedy, a life was lost and my heart goes out to the family.”

Butler said police offered no medical attention to Gurley until she banged on a neighbor’s door for help.

The New York Post is reporting that “the victim has been arrested 24 times and has done time behind bars,” according to unnamed sources. Critics already see this and other portrayals in the media as an attempt to smear Gurley despite the fact that whatever prior record he had likely has no bearing on what happened in that staircase.

Praying for the family of #AkaiGurley, unarmed Black man shot to death by an NYPD officer. This must end. #EricGarner #MikeBrown