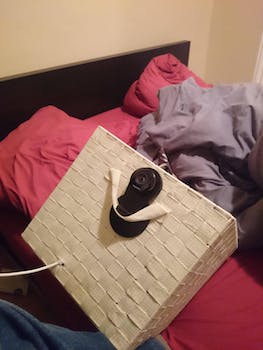 Please let this be fake.

Being in someone else’s space is always a little weird—but not this weird. In a Reddit post on r/wtf, user zedmin shared an image of a hidden camera, supposedly concealed in a New Year’s Eve Airbnb rental where it was pointed directly at the bed. A photo attached to the thread captures the woven white basket in which the camera was hidden, “pointing out through a small hole in the mesh of the box.” Yikes.

On BetaBeat three months ago, Jack Smith posed this exact scenario, concluding that Airbnb isn’t equipped to handle the complex legal ramifications of a host taking home security to horrifying, porny new heights. Given that homeowners are legally entitled to secretly monitor their own homes, it’s a sticky issue, to say the least.

In a follow-up to the original post, the redditor assesses their options, catching onto the fact that this might be—hopefully is—somehow illegal.

We are praying actual prayers that this will turn out to be bogus.