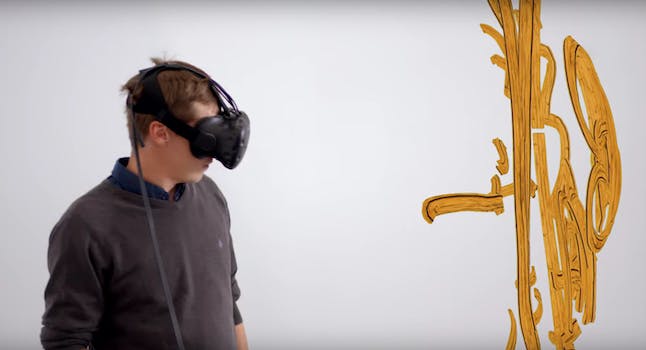 Project Dali is an immersive drawing experience that lets you create art in ways you've never even imagined.

One moment I’m standing in a nondescript corporate meeting room, a computer and virtual reality gear sitting on a table. The next I’m suddenly transported into a beautiful art studio. There’s a table, walls, even a little window. In my hands are two controllers that allow me to draw with hundreds of custom brushes, none of which are like anything I’ve ever seen before.

My host shows me how to make the world smaller or bigger by moving my hands, leaving me feeling like Alice in a digital wonderland, with an unending supply of growth and shrinking serum. Pulling my hands closer, I draw the walls in. There’s a window open, revealing a forest on the other side. I pull a little harder, thinking I can simply peer through to the other side, but I pull too hard and suddenly, I’m on the other side of the looking glass—the art studio nowhere to be found.

After five minutes with Project Dali, Adobe’s immersive drawing experience, I’ve accidentally found myself alone in a forest. It’s then that I realize there’s no other art space quite like it in the world—virtual or otherwise.

Erik Natzke spends a lot of time in this world. As the principal artist-in-residence for Adobe’s Creative Technology Labs Research Group, his job is mostly to think, tinker, and create. He basically draws all day—only his brushes are lines of code that build the foundation for this new world of artistic creation.

A graduate of the Milwaukee Institute of Art and Design, Natzke studied communication design in school, teaching himself to code in his spare time as part of his passion for interactive design. Now as the heart and soul behind Project Dali, Natzke is developing a virtual reality space that’s as much about exploration as it is creation.

“We’ve tried to find inspiration not only thinking about the natural things, like three-dimensional objects, but even flat objects,” he tells me at Adobe’s Minnesota Street studio, a 100,000-square-foot art space in San Francisco. “Like if I have an existing Photoshop PSD, what can I do with it if I was able to put on the headset and have access to those elements in the three-dimensional space? It’s a very powerful thing.”

Changes to the way we interact with creations can lead to different approaches and revolutionary results. Think about the difference between drawing with a mouse and a Wacom tablet, for example. But Natzke is quick to note that Dali is not made with graphic design professionals in mind at the moment—at least not yet.

“The motivation isn’t to create a product, but just to explore what’s there,” he says.

In this world, perfect lines are less important than discovery, something that becomes abundantly clear when you start looking at your brushes. Rather than give users a pallet of neat digital lines, Dali’s brushes have been individually scanned into Dali via an Adobe program called Brush, which allows you to photograph anything and turn it into a digital brush. On a 2D screen, Brush allows artists to explore with textures, but within the virtual reality realm of Dali, these custom brushes can be brought into a three-dimensional space.

Pause and let that idea sink in a moment. I certainly needed to.

“The other component that you start to see is the ability to take a shape that was flat and then put it into three-dimensional space,” Natzke continues. “We can take a line and turn it into a tube or an extrusion. We give it a certain number of radio points so we can make it a circle to create a pipe, or a rectangle, or a triangle-shaped extrusion. Eventually, I would love for it to be user-defined, so if you wanted to do the letter J and extrude it with bacon, for example, you could do an extrusion that way.”

Dali was launched at the Minnesota Street studio, so it’s only fitting that one of the spaces you can explore within the program is the studio itself, recreated using 360-degree photography. It’s a comfortable art studio, both in real life and in virtual reality, but the setting is secondary to the experience of Dali.

The first thing I noticed after drawing a few lines was just how freeing not using perfect brushes was. Each brush has its own oddities and imperfections; I suddenly stopped thinking about trying to create something impressive and started experimenting instead. I felt like I was sitting down in kindergarten with a fresh pack of crayons and pad of paper, discovering for the first time what kinds of lines different strokes and movements would create.

Within a few minutes, I was manipulating the thickness of my lines to turn my paintbrush strokes into three-dimensional pipes. In Dali, by simply holding buttons while moving your hands, you can make your creations smaller or larger or change your size within the room. What starts a jungle gym that envelops your whole space can quickly be shrunk into a tiny trophy that fits in your hand. And when you’re done with a creation, you can simply move to another part of the studio, leaving your creations around the room almost like a mini art gallery. You can experience those pieces from every angle, size, and perspective, too. The possibilities for architectural design seem limitless.

My favorite brushes within the app were inspired by a resident artist at the Minnesota Street studio who spent a summer going through old paintbrushes with acrylics, creating different brush strokes. Trying to match the texture of the brush with the lines I was creating changed the path of my strokes. I made some pretty Lovecraftian trees that day; Dali being an art project instead of a commercial product allows that sort of chaotic lack of conformity.

“If it did become a product, I would definitely say I’d try to standardize a set of brushes that would enable people to use a preconceived set of strokes and defaults, like how brushes from Brush are standardized when used with Adobe Sketch,” Natzke says.

Even with all its quirks, one of the aspects of Dali that struck me most is how intuitive it was. I’m familiar with tech and have used VR before, but I had never experienced a 3D creative environment before. Within minutes I was drawing in Dali. Discussing how different people picked up the process, Natzke says age is less a factor than creative willingness.

Dali could be a way of breaking down some of those barriers, for reimagining the shape of the world around you.

“That’s the big thing about Dali. The motivation is to get artists into a state of flow and give them tools that represent themselves,” Natzke says. “I’d say that’s the big differentiator, but I’ve not been looking at it as a differentiator. I’m just trying to enable creativity in a way that connects with people and their style, and how they want to shape the world around them. I think that perspective is what sets Dali apart from any application, whether it’s in virtual reality or otherwise.”

Computers allow us to get work done faster, but sometimes they create a sense of disconnect from what we’re creating and even the world around us. Dali is one of the first times I’ve used a digital product that brought me closer to my creative urges, getting so lost in the tools that I forgot I was even using them—or where I really was. When I discovered that hidden forest, it threw me for a loop, but then it sparked my imagination.

I’ve been wanting to revisit it ever since.