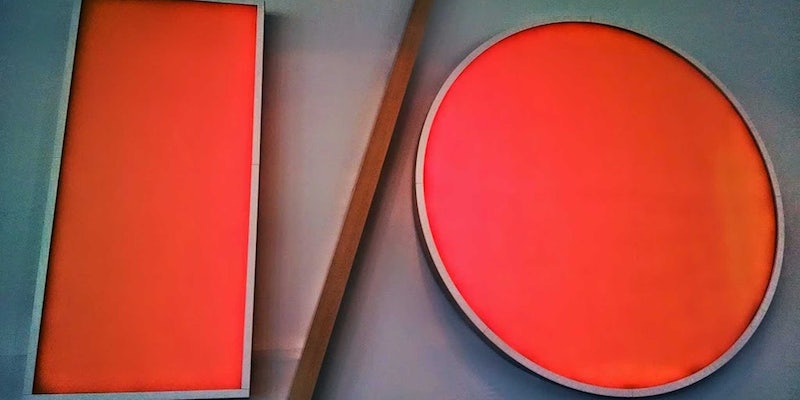 It's been a weird day for Google.

Today is one of the biggest days of the year for Google, where the company takes to the stage at its Google I/O conference to show off everything it’s been working on for the past year. Where Google I/O keynotes of years past have included huge reveals like the Chromebook notebook line and Nexus tablet, this year’s event was surprising in all the wrong ways.

It all started a short while into the keynote when an audience member holding a banner began screaming and yelling at the crowd. The woman was protesting the influx of tech workers into the San Francisco area, and the banner she was holding claimed that she had been evicted from her home by a Google employee.

These kinds of protesters are nothing new at big tech events, especially in the San Francisco area, but the bold attempt at upstaging Google certainly raised a few eyebrows and would serve as an omen for the rest of the keynote.

Google spent a good deal of time talking Android, showing the developers in the crowd some new UI elements they’ll be able to use in future apps, along with still-in-development versions of new software for in-car entertainment systems and TVs, named Android Auto and Android TV, respectively.

Then came a string of demos that Google probably wishes it could redo, including apps that wouldn’t load, a game graphics demo that was flickering and repeatedly cut out, and a coding example that had to be attempted three times before it displayed properly. It was all very strange, and the awkward mumbling from the audience whenever something broke certainly didn’t help matters.

After two hours of technical talk, with nary a mention of new hardware or consumer-level software, the attendees began to get a bit bored. It was at this point that Twitter briefly became a strange meta-I/O, with dozens, or perhaps hundreds of attendees hopping on their Twitter accounts to talk about how bad the show was—while it was still going on.

We’ve now entered the part of the conference where the journalists mess around on Twitter.

Have we arrived on Google island yet?

Two hours should be the legal limit for any keynote. Come on.

The talk stretched on for another hour, but the craziness refused to subside. At about the two-and-a-half-hour mark, a man began running around the conference hall screaming something at the top of his lungs, and this time it had nothing to do with real estate prices.

“You all work for a totalitarian company that builds robots that kill people!” he repeatedly screamed at the top of his lungs, moving about the audience in an attempt to avoid being forcibly escorted from the building.

There was really no coming back from that, and both the crowd, and the presenters appeared clearly rattled by the strange events of the past few hours. Of course, they took to Twitter to have some fun with it.

Actually killer robots would really spice up this keynote

maybe google pr planted the protesters to wake people up during this boring keynote.

Joke is on us. Google’s “next big thing” is probably a killer robot that will kill all media.

Needless to say, things could have gone better for Google today. You can watch the whole thing here for yourself.