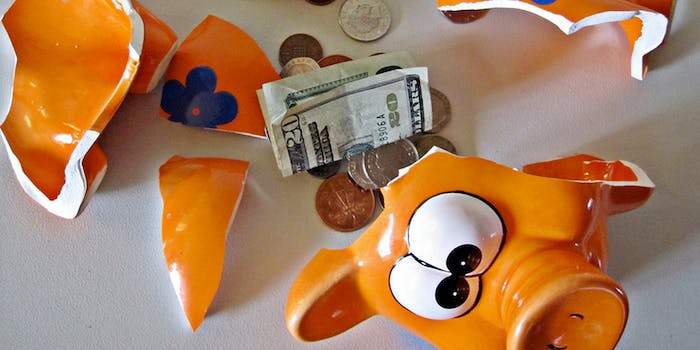 Survey: 40 percent of millennials would bank with Google

Survey suggests tech companies could break into the banking industry if they wanted to.

It’s no secret that banks are unpopular these days. Following the housing crisis and resulting recession, massive Occupy protests brought scrutiny down upon Wall Street. Even among non-protestors, confidence in the financial industry has been on the decline.

But would Americans ever consider giving up traditional banks and instead house their money in tech companies like Google or Amazon? According to a new poll, a surprising number of millennials would apparently be open to that.

In a recent study, Accenture, a management consulting and outsourcing firm, surveyed about 4,000 retail bank customers in the U.S. and Canada and found that roughly 39 percent of respondents between the ages of 18 to 34 would switch to a branchless form of electronic banking through a company like Google, Amazon or Apple if the option were presented.

This is higher than the 29 percent of 35- to 55-year-olds who felt the same way. Not surprisingly, those over 55 were the least open to the idea, with only 16 percent embracing the hypothetical scenario.

“Tomorrow’s consumer is coming of age with a very different perception of what a bank could be,” Wayne Busch, managing director of Accenture’s North America Banking practice, said in a written statement. “Those expectations could become profoundly disruptive to banks if non-bank entrants gain momentum and banks fail to adapt quickly.  This will have important implications for the ‘digital generation’ spanning nearly all age groups.”

Accenture’s poll follows a three-year study by Scratch, a Viacom consulting subsidiary, which found that millennials’ dislike banks more than other types of institutions and found that banks will soon be irrelevant, replaced by next-generation options.

Though it may seem like a wild idea to bank with a search engine or computer manufacturer, tech companies often evolve beyond their original purpose as they begin to diversify and offer more services. For instance, Amazon, which began as a bookseller, has grown into an all-encompassing retail giant that’s even started delivering groceries.

“Digital technologies are dissolving the boundaries between industry sectors,” said Moreno. “For banks, simply being ‘more digital’ versions of what they are today will not be enough to assure success in the future.”