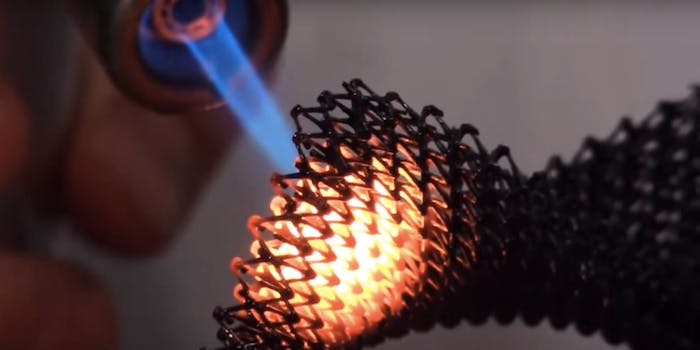 Creating the megastrong material is a first for 3D printing.

3D printing has changed manufacturing, and its uses run the gamut of functionality from giving people mobility to changing the way surgeries are performed. But until now, 3D printing ceramics—the strong material unaffected by extreme heat used in things like jet engines and nuclear machinery—was extremely limited.

A new 3D-printing invention could change the way flawless ceramics are made, Popular Mechanics reports. In a first for ceramics manufacturing, the team at HRL Laboratories has created fully dense ceramic parts just as strong as traditionally engineered ceramics via 3D printing.

With just a $3,000 3D printer, engineers use pre-ceramic resin with materials needed to form the final product. Then, by using a UV laser, the resin turns into a polymer, which is fired at 1,000 degrees Celsius overnight, and converts it into a ceramic. As senior scientist Tobias Schaedler demonstrates, the crystalline ceramic can be held with bare hands while an intense flame does nothing to damage the material. Metal, on the other hand, melts in seconds.

3D-printed ceramics have the potential to be used in a ton of different ways from engines in planes and cars to electrical mechanical systems. HRL Laboratories’s paper on the ceramics manufacturing was published in the January 2016 issue of Science magazine.