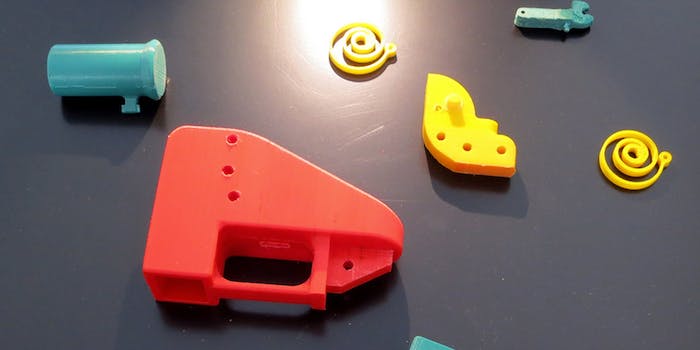 On Monday evening, a bill aimed at thwarting the production and distribution of plastic 3-D printed weapons was blocked by Senate republicans.

In particular, the bill sought to address the fact that plastic firearms have become a reality in recent years with the rise of 3-D printing technology. Earlier this year, the first printed handgun was successfully tested and declared a lethal weapon.

Though still not widely distributed, these weapons can be brought through metal detectors and into schools, public buildings, and airports. Many expect this threat to increase 3-D printing technology becomes more available and plans for these weapons more readily accessible online.

The debate over the new legislation centered around the 1988 Undetectable Firearms Act, which bans the production and distribution of weapons that skirt “walk through metal detectors.” The act has been renewed on two occasions since its passage. It was due to expire again on the 9th of December.

The House voted to renew the bill last week. The rise of 3-D printing has made this year’s renewal more complicated in the Senate. Many lawmakers, particularly democrats, feel the current Undetectable Firearms Act inadequately addresses the rising threat posed by printed plastic weapons.

On Monday evening, only days before the one-year anniversary of Sandy Hook Elementary School shooting, the Senate extended the Undetectable Firearms Act but failed to pass modifications that would address the growing prevelance of plastic firearms.

In particular, gun control advocates were attempting to address a provision in the act that which says that in order to make a firearm legal, manufactures must insert a metal component into the weapon. However, that piece needn’t be central to the gun’s functionality. As such, one could by a plastic firearm and simply remove the metal.

The passage of the modified bill would have mandated that a 3-D printed gun cannot function without a detectable metal component.

Iowa republican Senator Chuck Grassley said the language of the new bill was not available until the afternoon of the vote, calling it “eleventh hour” legislation. This, he said, was his motivation for voting against it.

Charles Schumer (D-NY) disagreed. While the actual language was made available today, the “concept was out there for weeks and weeks if not longer.” Schumer went on to add that while he wished the new modifications to the bill would have passed, it “doesn’t mean we can’t try to do that over the next few months.”