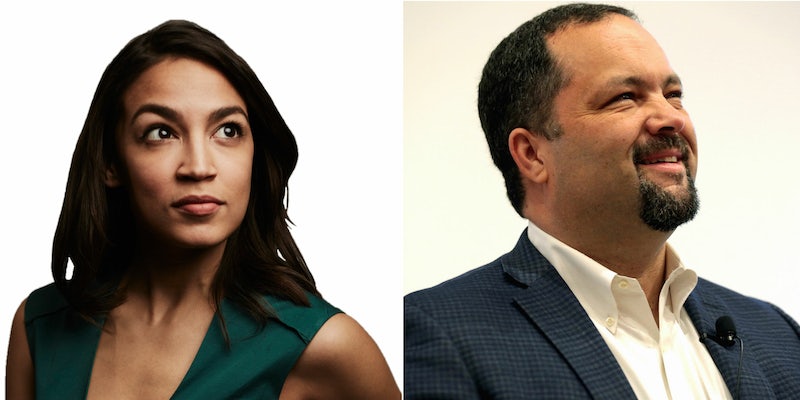 Things could change between now and November.

A Democratic Socialist is going to Congress.

The progressive energy that has resulted in a spike in grassroots activism and has propelled victories in local elections across the country took another step forward Tuesday night. After several key primary victories, left-wing candidates are now poised to make an impact in Congress and in governor’s mansions across the country.

The most stunning outcome of the night was the victory of Ocasio-Cortez. Crowley enjoyed a 20 year-congressional career before his loss Tuesday night and was widely considered a strong candidate to become a party leader. Crowley’s donor list read like the Fortune 500. Unions and prominent party figures lined up behind him.

Ocasio-Cortez was working as a bartender a year ago.

Though Ocasio-Cortez’s win shocked the mainstream media, her activist credentials read like a resume tailor made for this moment. She went to Standing Rock to protest the Dakota Access Pipeline. She worked for the Bernie Sanders campaign. She has campaigned for Medicare for All and she has worked closely with the Democratic Socialists of America.

In addition to building relationships with progressive groups and movements, Ocasio-Cortez has also engaged deeply with her district. Ocasio-Cortez is of Puerto Rican descent and she feels that her working class background puts her in a strong position to understand the needs of her incredibly diverse district.

While Ocasio-Cortez will still have to face a general election challenger, her district, comprised of Queens and the Bronx, gave 78 percent of their vote to Hillary Clinton in 2016. She will almost certainly win in November.

Ocasio-Cortez may be the most left-wing member of Congress when she joins the House. She favors the abolition of ICE and recently visited the border. Though she worked for Sanders, she is to the left of the senator on a number of issues.

When asked by labor publication In These Times about campaigning as a Democratic Socialist, Ocasio-Cortez said, “I show people what we’re fighting for. What I talk about is Medicare for All, tuition-free public college and housing as a human right. In my interpretation of what Democratic Socialist is, it is the fight for the basic level of dignity that our society refuses to violate.”

In Maryland, former NAACP leader Ben Jealous defeated his more centrist challenger Rushern L. Baker III for the chance to take on Republican Gov. Larry Hogan in November. The story here is much the same as with Ocasio-Cortez. While Baker enjoyed the endorsement of most of the state elected officials, progressive groups backed Jealous.

Jealous supports Medicare for All, free college, and $15 minimum wage. He is only the second African-American ever nominated as a major party candidate for Maryland governor.

At his victory party Tuesday night, Jealous told his supporters, “Our goal is to not just win an election but to build a movement, which will allow us to lead into law the new agenda that this state so desperately needs.”

Progressive groups showed their electoral power not only in the case of Jealous and Ocasio-Cortez, but in a number of local races across the country. The Bernie Sanders-backed Our Revolution claimed at least 10 state and local victories Tuesday night. DSA also added a few state house primary wins. Brand New Congress, Justice Democrats, People for Bernie, and Democracy For America all backed Ocasio-Cortez, and most of these groups claimed other victories as well.

Now that Ocasio-Cortez has won, there is rampant speculation about what her victory means for upcoming elections and the Democratic party as a whole. While House Minority Leader Rep. Nancy Pelosi dismissed the result as unique to one district, and “not to be viewed as something larger,” these progressive groups are optimistic that they can replicate their electoral success and push the party left.

Though left-leaning groups across the country now see a political opening, Ocasio-Cortez could have short term local consequences as well. Many in New York see Ocasio-Cortez’s victory as a prelude to the governor’s race. Cynthia Nixon, who had endorsed Ocasio-Crowley, will seek to unseat Gov. Andrew Cuomo in November in a race progressives hope plays out similarly to last night’s contest.

Though the full impact of Ocasio-Cortez and Jealous’s candidacy remains to be seen in November, it is undeniable that political orthodoxy has changed. Candidates don’t need to be afraid to run to the left with a concrete platform.

Socialists and progressives are winning in Virginia, Pennsylvania, New York, and Maryland, in districts that vary widely on racial and economic lines. Even if not all of these candidates can translate their victories into real change, no one should be afraid to run a bold, progressive campaign regardless of what Republicans say about scaring their constituents.

Because their constituents have spoken. They want change.