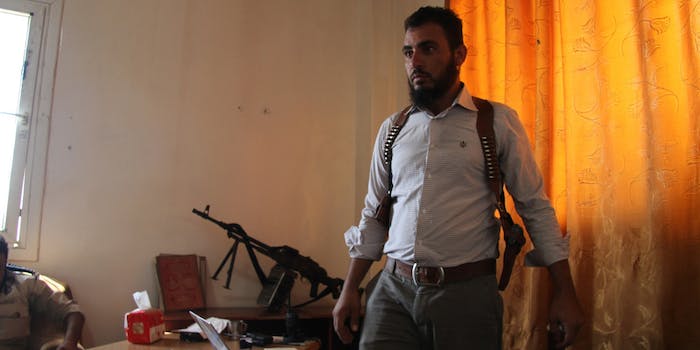 Can gaming change the way we see conflict in the Middle East?

Rather than churning out a series of 800-word features for the 24 hours news cycle—a forum he felt was failing to communicate the horror of the Syrian War—Swenson penned a create-your-own-adventure game based on what he witnessed in Syria.

“1000 Days of Syria is,” according to Swenson, “a text-based historical fiction game that timelines the first 1000 days of the Syrian uprising through interactive narratives.”

Now available to play online for free, 1000 Days of Syria invites gamers to experience the devastating conflict in Syria from the perspective of either The Family, a mother of two living in the southern Syrian town of Daraa; The Fighter, a rebel youth living in Aleppo; or The Foreigner, an American journalist based in Beirut.

In an introduction to 1000 Days of Syria, Swenson notes that, “Although the characters here are fictional, their predicaments are very much real. The personalities and scenarios you will encounter have roots in the true accounts of those Syrians fortunate enough to tell them.”

Swenson was a final-year student at Columbia University’s creative non-fiction program when he embedded with the Sham Falcon’s Brigade, a militant faction opposed to Bashar Al-Assad, for 10 days last October. He was joined by David Axe, founder of War is Boring. At the time, few foreign journalists risked reporting from inside Syria, and those who stayed were were in perpetual danger of being kidnapped, or worse.

Returning to the U.S. from Syria, Swenson was unsettled by the indifference to the Syrian conflict he perceived around him, a conflict which, the most recent figures suggest, has claimed more 190,000 lives, drawning the U.S. military and its allies into continued military operations in the region.

In Sept 2013 ~10x as many people were reading about Miley Cyrus than the atrocities in Syria. For me that was very disheartening. #muckedup

“Coverage of conflict abroad may never overshadow news of Lady Gaga or Miley Cyrus,” writes Swenson in the game’s intro, “but if 1000 Days of Syria can at least inform and perhaps motivate an otherwise naive few, the mission of the game will have been a success.”

Can 1000 Days rejuvenate interest in the catastrophes of war in Syria? That it was an official selection at both Indie Prize Showcase and the Meaningful Play Conference seem to suggest it’s on the right path. As I report now, from an increasingly tense and overshadowed region of the Middle East—Israel and the Palestinian territories—I urge you to game to decide for yourself.

Screengrab via 1000 Days of Syria (used with permission)