Andy Hirschfeld is a political and financial journalist based in New York City. In addition to The Daily Dot, he's an active contributor to several notable publications including Bloomberg News, The New York Observer, OZY, Mic, Fortune, and The Christan Science Monitor. He's also the host of The Coffee Break Podcast and the author of the new book 'The Business of Child Abuse: An Expose on The Troubled Teen Industry.' Previously he produced for ABC, CBS, and CNN. Follow him on Twitter @andyreports 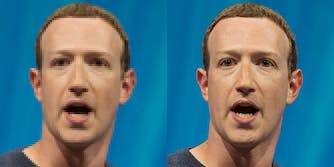 Technology created deepfakes—does it have a way to stop them, too?

Deepfake detectors may be on the way.