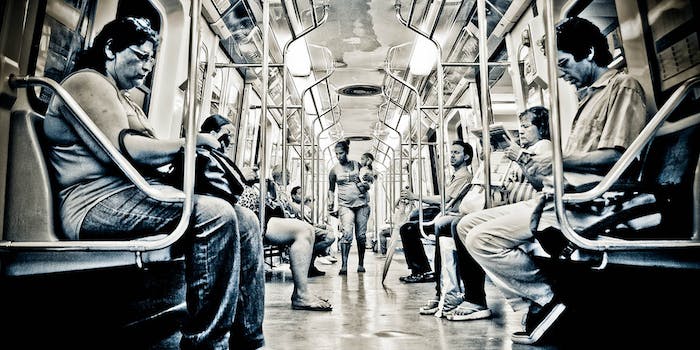 Hint: It's not because of the Internet.

The kids are not all right. As the millennial generation starts to reach its 30s, many of these ‘80s and ‘90s kids are having kids of their own, and recent surveys show one in five millennial parents is living in poverty. That’s the result of a combination of rising costs for raising children, falling wages, increased unemployment, and high debt—mostly college related. But the boomer generation seems to think otherwise: Millennials are to blame for their own financial situation, thanks to wasting time on the Internet and being too lazy to find jobs.

Millennials certainly are facing a financial crisis, but it’s not because of how they use their money, nor is it the result of how many Facebook quizzes they take or BuzzFeed listicles they read. It has much more to do with the financial legacy left to them by the boomers—and the refusal to acknowledge that this is a generation in dire need of better social support.

Everyone loves to hate on millennials. Patricia Sellers at Fortune writes: “While we Baby Boomers typically place high value on pay, benefits, stability and prestige, Gen Y cares most about fun, innovation, social responsibility, and time off.” Charles M. Blow at the New York Times wrote witheringly of the “selfie generation” that: “All in all, we seem to be experiencing a wave of liberal-minded detach-ees, a generation in which institutions are subordinate to the individual and social networks are digitally generated rather than interpersonally accrued.”

Everyone loves to hate on millennials.

Workplace consultant Sherri Elliott-Yeary further believes: “Millennials are not willing to make work the central focus of their lives as Baby Boomers have.” Millennials are all too busy looking for fun to buckle down and work—which is why companies have to resort to juvenile features like slides and ball-pits to attract millennial workers, and why millennials flock to the Internet. Millennials believe in YOLO, FOMO, and #picsoritdidnthappen.

The hashtagging, selfie-ing, status updating, social networking generation is so mired in the Internet, it’s no wonder that millennial parents are poor—or so, at least, goes the logic of commentary after commentary on this particular generation. The Internet is classed as a time waster and a sign of millennial laziness, but more than that, it’s evidence that young adults aren’t trying hard enough to find jobs and resolve their financial dire straits.

This is a curious classification of a generation that was handed every possible disadvantage in life by a prior generation. Boomers created a social, economic, and environmental mess that will take decades—if not centuries—to clean up, gifting millennials with war, climate change, a recession, runaway inflation, and an absurdly competitive job market.

Millennials were promised that if they followed the American prescription for success, starting with a college degree, they’d be on a track to profitable careers and respected roles in American society. Instead, they entered college precisely at the moment tuition was skyrocketing, endowments were falling, and interest on student loans was climbing. College loans are a major contributor to millennial debt, so much so that there are legitimate fears of a college debt bubble that could be as devastating as the tech bubble of the 1990s (boomers) or the recession (boomers again).

At Medium, Hanna Brooks Olsen writes of the myth served to millennials:

I went to a university (something that neither of my parents did, through choice and circumstance and a systemic series of beliefs about who college is for) to no longer be poor, because I believed, as I was told by guidance counselors and the media and many adults and colleges themselves, that that was the only way to be not-poor. And yet, going to college made me, at least in the years since I’ve graduated, more poor.

Instead of getting the world on a platter—what boomers claim they offered to millennials—American youth are facing incredible financial and social hardship. At the same time, they’re confronting historic American attitudes about bootstrapping and the belief that the solution to poverty is to try harder. It’s perhaps not surprising that they turn to the Internet to find communities of people sharing the same experiences and frustrations.

Hand in hand with bootstrapping attitudes comes the belief that poverty should be a life of suffering—which leaves no room for owning computers and smartphones, setting up Facebook accounts, or Skyping with friends. A generation so heavily technologically engaged cannot possibly be poor if it’s wasting money on such frivolities, and members of that generation are hardly deserving poor if they’re having fun.

Conceptualizing the Internet as a cure to social isolation is alien to critics of the younger generation. When these critics come from the very generation that functionally destroyed any reasonable chance of success for millennials, the medicine goes down poorly.

Especially when the Internet is about much more than having fun—something no poor person should be ashamed of in the first place. It’s also about networking and making connections, the self-same activities that can lead to finding jobs. At the same time that older generations criticize youth for being lazy or disinterested in finding work, they reject the systems millennials are building to create a functional job market for themselves.

Creating online networks can lead to innumerable job contacts and leads—including at companies that believe employees should be provided with fun as well as work.

Googlers, for example, infamous for their workplace perks, are also some of the hardest-working techies in Silicon Valley, routinely working long over 40 hours a week. Such is true of many programmers and software developers, who in addition to putting in 60-70 hours a week may also be on call to handle crises. Perhaps these “lazy” millennials shouldn’t be blamed for wanting a decent cafeteria at work or a foosball table to goof around on while waiting for code to finish compiling.

For millennial parents, social attitudes about millennials and class can be especially stressful, as they realize that if they wait for financial stability to have children, they may never have the chance to become parents. For a generation looking at an uncertain financial future—except for a fortunate few with the unique skillset to enter the job market at high wages, like those Googlers—parenting comes with added fears and stress.

Millennials were promised that if they followed the American prescription for success they’d be on a track to profitable careers.

Millennial parents face poverty for all the same reasons their generation experiences downward mobility, paired with the high costs for managing childrearing. The costs of childcare are skyrocketing, forcing some parents to leave their jobs to raise young children, leaving a household bound to a single income. Single millennial parents don’t have the option of leaving their jobs, instead of relying on friends, family members, and the social safety net—a net that’s shrinking all the time, thanks to cuts to government funding.

We shouldn’t be shocked that millennial parents are the poorest generation in 25 years, nor should we be blaming it on the baby pictures they’re posting on Facebook. Instead, we should be placing the responsibility where it really lies: on the generation that set millennials up for failure and their determination to continue arguing that millennials brought this upon themselves.