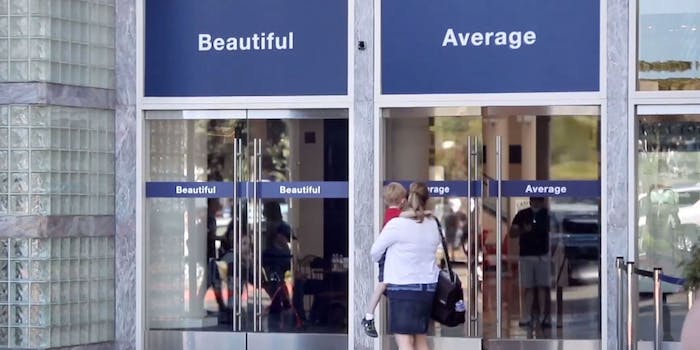 When is a movement not a movement? When it’s a marketing campaign in a movement’s clothing.

For over a decade now, the folks over in Dove‘s marketing department have been trying to capitalize on the growing rejection of overly airbrushed bodies of already too-thin models with their “Campaign for Real Beauty.” The campaign has been wildly successful in garnering media attention over the last ten years, functionally earning Dove millions of dollars in free advertising. But with after wave after wave of advertising, one can’t help but wonder if this “campaign” has done anything besides sell a lot of soap.

Dove grabbed headlines again this week with its newest video and hashtag push, #ChooseBeautiful. The premise is that most women tend to describe themselves as “average” when asked, but they would feel more empowered if they chose to describe themselves as “beautiful.” The campaign comes complete with its own Tumblr, chock full of self-help buzzwords and “tools” for finding your inner beauty.

Superficially, this certainly seems innocuous, bordering on positive. After all, women are beautiful, and it would be a wonderful thing if we all were a little better at embracing our own brand of beauty. However, coming from a corporate source interested in selling us a product, it comes off as patronizing. The deeper message here appears to be that Dove feels women have poor self-esteem, and it wants to save us from ourselves.

When is a movement not a movement? When it’s a marketing campaign in a movement’s clothing.

On the surface, it’s hard to object to the “Campaign For Real Beauty.” When it launched in 2004, examples of anything that approached average-shaped bodies were virtually non-existent. It was exciting to see a company, especially one hawking beauty products, choosing to feature women who were not models in its magazine spreads and commercials.

If Dove had simply stopped there, had just continued to make a political point through the choices they made in models—and pushed more companies to do the same—I think we’d be continuing to sing their praises for being so progressive about body inclusivity.

Instead, the folks who write Dove’s marketing strategy have tried to start a movement, complete with hashtags and selfie campaigns. Dove has decided to appoint themselves the ambassadors of body acceptance for women and present themselves as both your therapist and your friend. Dove knows what you need to feel better about yourself, and it’s going to give it you, whether you like it or not.

The problem is, of course, that Dove’s not in the business of changing beauty standards. They’re in the business of selling soap. The “Campaign For Real Beauty” amounts to little more than a new twist on an old theme—the commodification of women’s bodies to sell a product.

Of course, Unilever, the company that owns the Dove brand, is no stranger to using women bodies to hock its goods. Unilever is also the parent company of the Axe brand of male-targeted grooming products, which has a lengthy history of advertisement that objectifies women and promotes rape culture.

Despite consistent public pressure and criticism from feminists, the folks at Unilever continue to allow their Axe line to be marketed in a manner that makes the sexism of beer advertisements look like weak sauce. There’s an obvious reason to keep up with that message: because it pays the bills.

However, cast against all the platitudes of acceptance, self-love, and all-bodies-are-beautiful that it pushes so hard through the Dove brand, it feels particularly hypocritical. Unilever wants to lift women up but has no problem teaching and reinforcing abject sexism in young men. It’s a reminder that Dove’s “Real Beauty” campaign isn’t a social movement. It’s about as authentic as press-on nails.

Dove certainly isn’t the only company to attempt to ride the coattails of a social movement to boost their bottom lines. As gay rights have become increasingly socially accepted, everyone from Nabisco to Burger King has leapt to proclaim their support for the LGBT community; the latter released a “Proud Whopper” to celebrate gay pride last summer, but only in certain gay-friendly markets. You’d be hard pressed to see the company fighting on the front lines in Indiana or Arkansas, where LGBT peoples’ rights are currently being threatened by discriminatory “religious-freedom bills.”

There’s an obvious reason to keep up with that message: because it pays the bills.

The practice of profiting off of LGBT rights’ movements only when it serves the bottom line is now common enough that it has become known as “gay-washing.” The concept of gay-washing is an extension of one of the original movements-as-marketing campaigns: selling pink things in the name of breast cancer awareness (referred to as “pink-washing”). After the Ray Rice video led to widespread criticism of how the league handles domestic violence, the NFL solved its “woman problem” not by taking a stand against abuse but with a nice pink PR campaign.

And earlier this year, the folks over at Starbucks earned some pretty serious ridicule for appearing to try to capitalize on the increasing awareness of racial tensions with its #RaceTogether campaign. However, many of the company’s baristas refused to discuss race with their employees, despite a mandate from the company’s CEO, and the public was equally reticent to discuss Ferguson with a 20-year-old working part-time at a cafe. A Saturday Night Live segment perfectly parodied the campaign, comparing it to having a conversation about gender politics with your mechanic.

While these moves were carefully calculated to improve the corporate social capital, they largely backfired, and the Dove campaigns continue to be met with a quizzical reaction on the Internet. In a post for Jezebel, Kate Dries sums the response up nicely: “It’d be nice if [Dove] stopped assuming that everyone’s version of hating what they look like or not feeling self-confident involves tears and can be fixed with a little Dove Reality Check™ or whatever [the company is] calling it this week.”

We certainly can—and should—expect social responsibility from the companies we choose to do business with. However, social movements are born from people with a goal to improve the world around them, not a marketing team with an audience to sell to.

The “Campaign for Real Beauty” is certainly clever viral marketing, and the folks behind it deserve credit for convincing dozens of news outlets to share its advertisements. But let’s not paint these videos as something bigger, broader, or more important than they are. Women don’t need a soap company to tell them that they’re beautiful, and a viral ad campaign isn’t going to change how women interact with artificial beauty standards. We should do that for ourselves and for one another, and Dove should stick to selling body wash.

Mari Brighe is a writer, speaker, activist, and scientist based in Detroit. Her essays focus on queer and